THE COUNTY OF THE ANCIENT ALPHABET 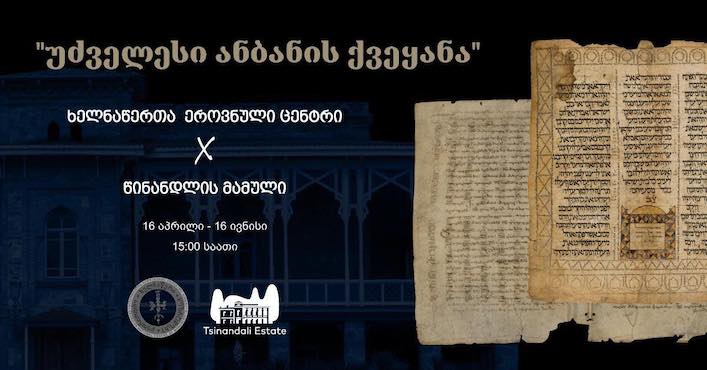 On April 16, at 3pm the Korneli Kekelidze Georgian National Center of Manuscripts and the Tsinandali Estate will present the first exhibition from the joint series The Country of the Ancient Alphabet.

Alexander Chavchavadze's estate was one of the main centers of avant-garde thought and culture of the 19th century Georgia. Tsinandali Museum will host the most important treasures of the Georgian National Center of Manuscripts, which houses the unique samples of the literary culture of Georgia, intellectual memory of its people and the manuscript heritage.

The exhibits of the show include the Lailashi Bible – exceptional and mysteriously unique object and a treasure of the cultural heritage. The scholars consider the manuscript dated back to the 10th-11th cc. to be invaluable as there are only several similar ones preserved globally. Tsinandali Museum will put on display its digital version and a copy.

The show will also present some of the most important manuscripts and facsimile editions from the collections of the National Center of Manuscripts. The visitors will have an opportunity to get familiar with rich Georgian literary culture, manuscript heritage and the calligraphic diversity of the ancient country, unique samples of the manuscript decors.

The evening will end with a 3D projection that is created based on the collections of the National Center of Manuscripts.

The project is realized with the support of the Tsinandali Estate.

TSIKARA - MUSEUM IN THE MUSEUM

Organized by TBC and the Writers' House of Georgia.