Zedazeni is one of the oldest Georgian monasteries. Its history dates back to 510s, when St. John of Zedazeni (Ioane Zedazneli in Georgian), the leader of the group of monks known as “thirteen Syrian Fathers,” secluded himself on the summit of Mount Zeda Zadeni (i. e. Upper Zadeni, later the the place name was shortened to Zedazeni). Soon his disciples founded a monastery at the bottom of the mountain and St John became its abbot though remaining in his hermitage. After his death in 543, a small single-nave chapel was built atop the mountain, next to St John’s hermitage. It contained the burial place of the saint and a spring which was believed to be miraculously created by him. Zedazeni Monastery arose around this chapel. 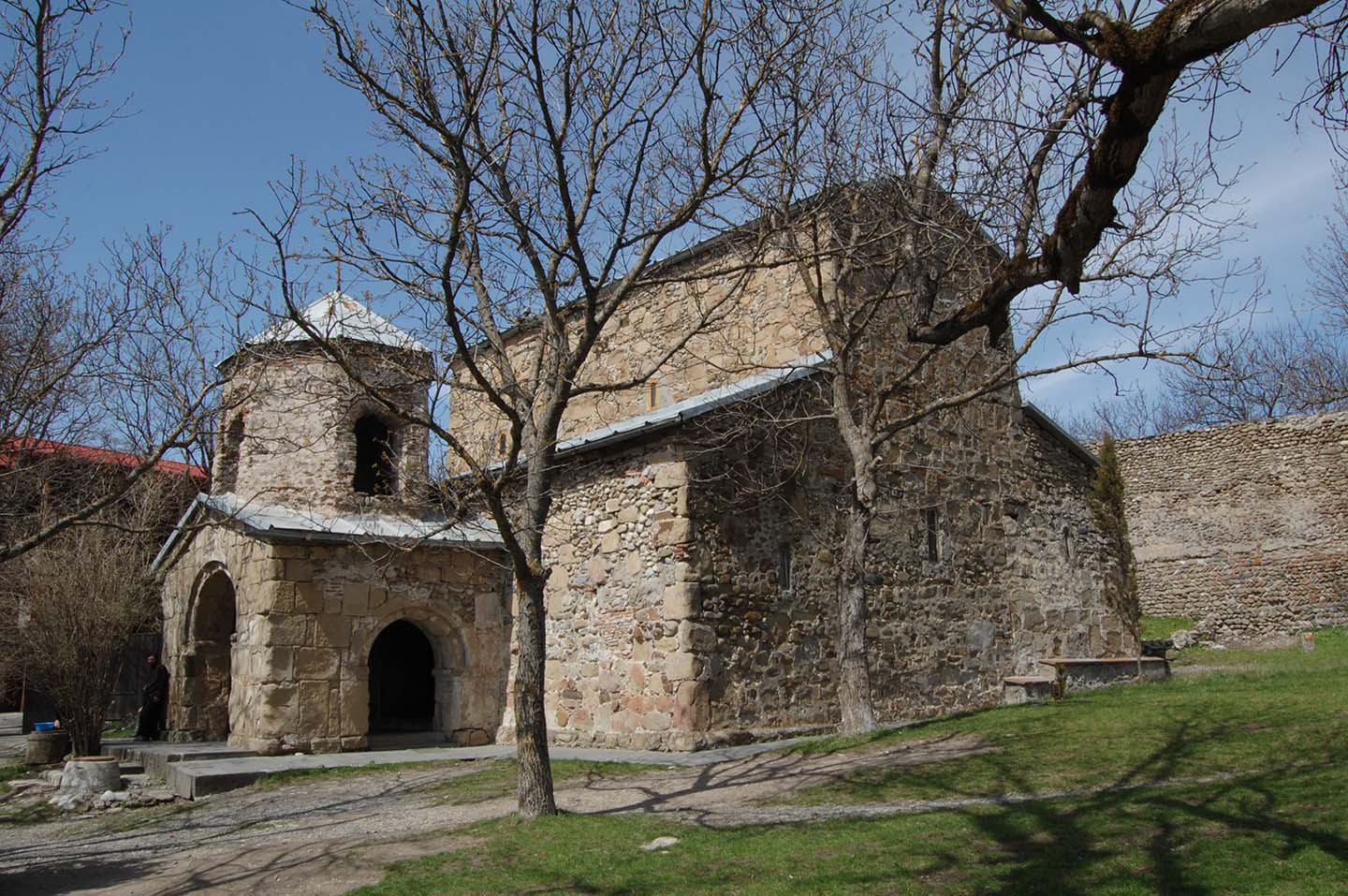 The church of Zedazeni Monastery from south-east

In 770s, Catholicos Clementos built a new church in Zedazeni monastery. It is a basilica of almost square plan, with two pairs of piers. Building material of the basilica – roughly cut stone is indicative of reduced material resources of the Georgian church in the eighth century. 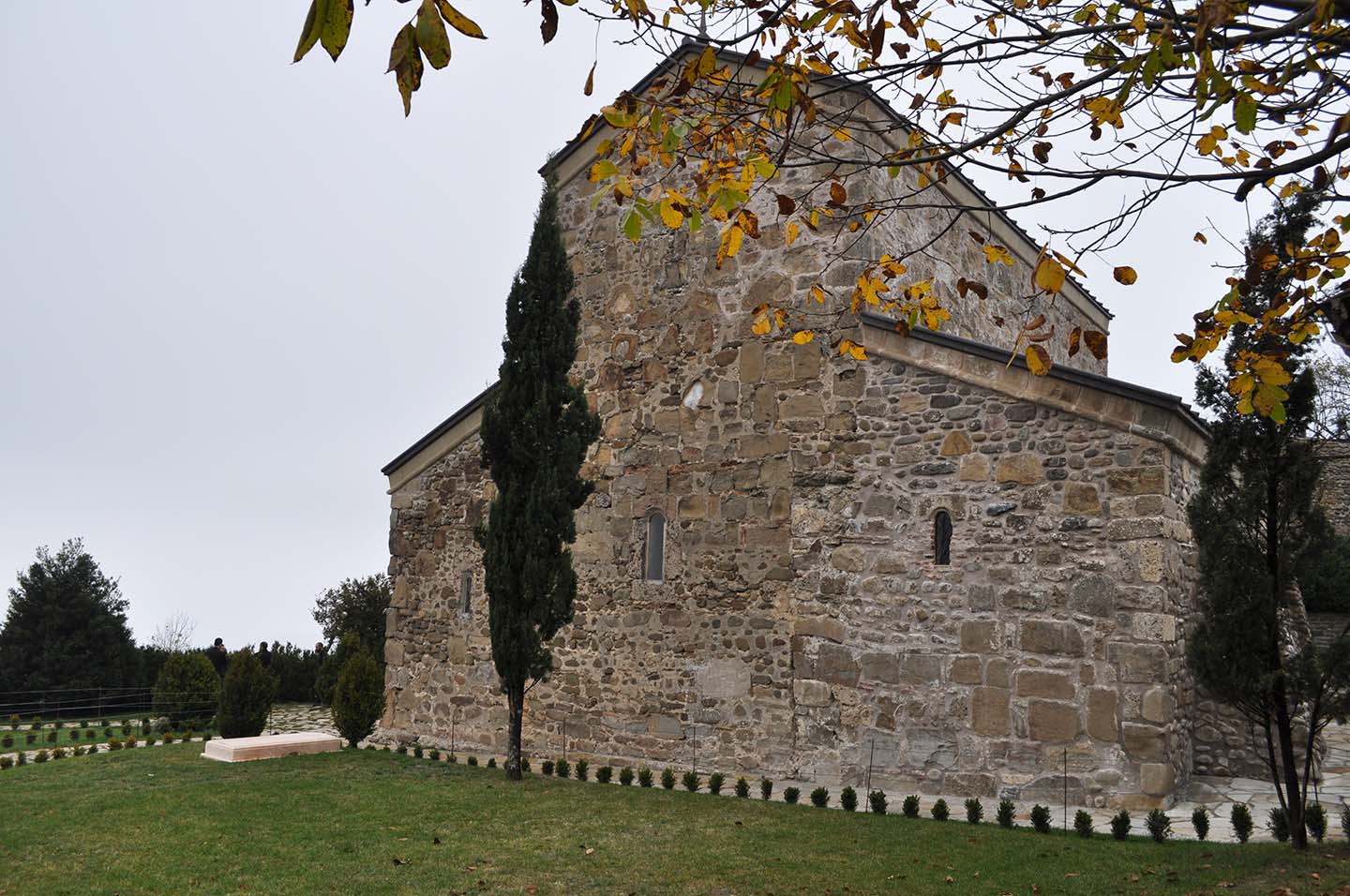 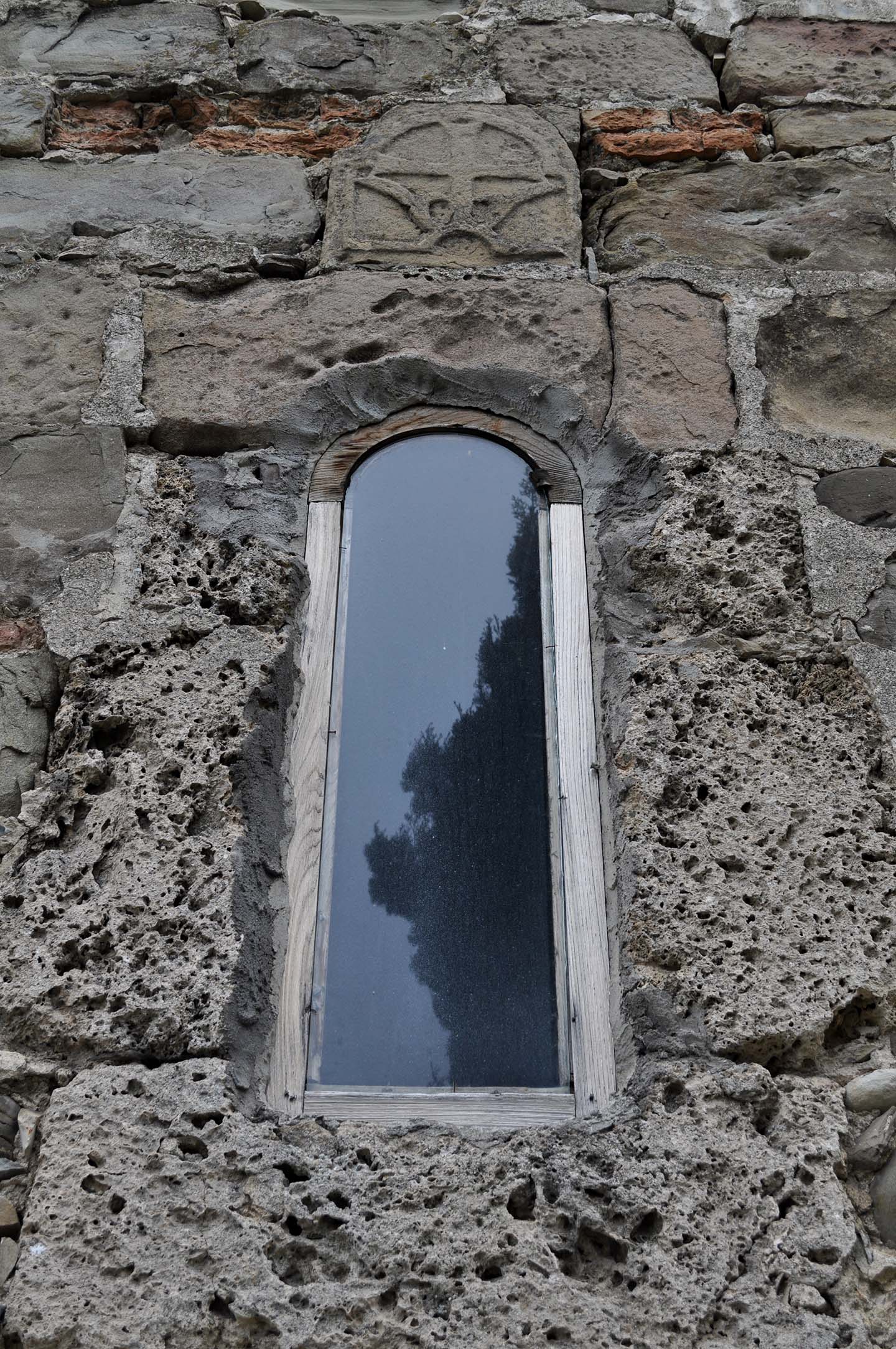 Flourishing cross above the sanctuary window

The building is plain from the outside, its decoration is limited to two carved images of the flourishing cross on the eastern façade, one above the sanctuary window and the other in the gable. 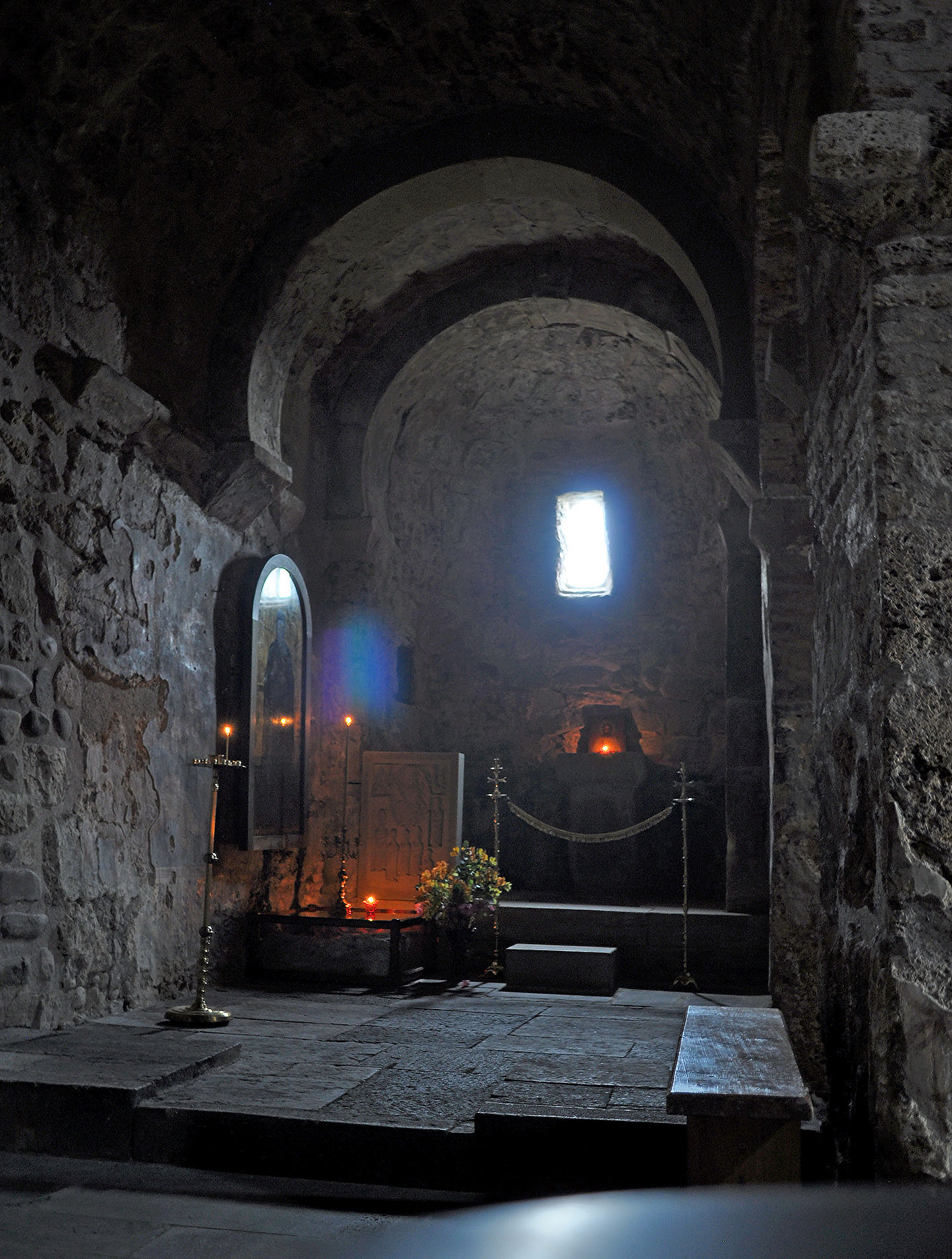 The chapel with the tomb of St. John and the well

The northern aisle of the basilica incorporated the sixth-century chapel with the stone tomb of St. John and the spring well. The architecture of the chapel differs from that of the basilica itself both in forms and in building material. Supporting arches of its barrel vault have a horseshoe shape and are built of large hewn stones. 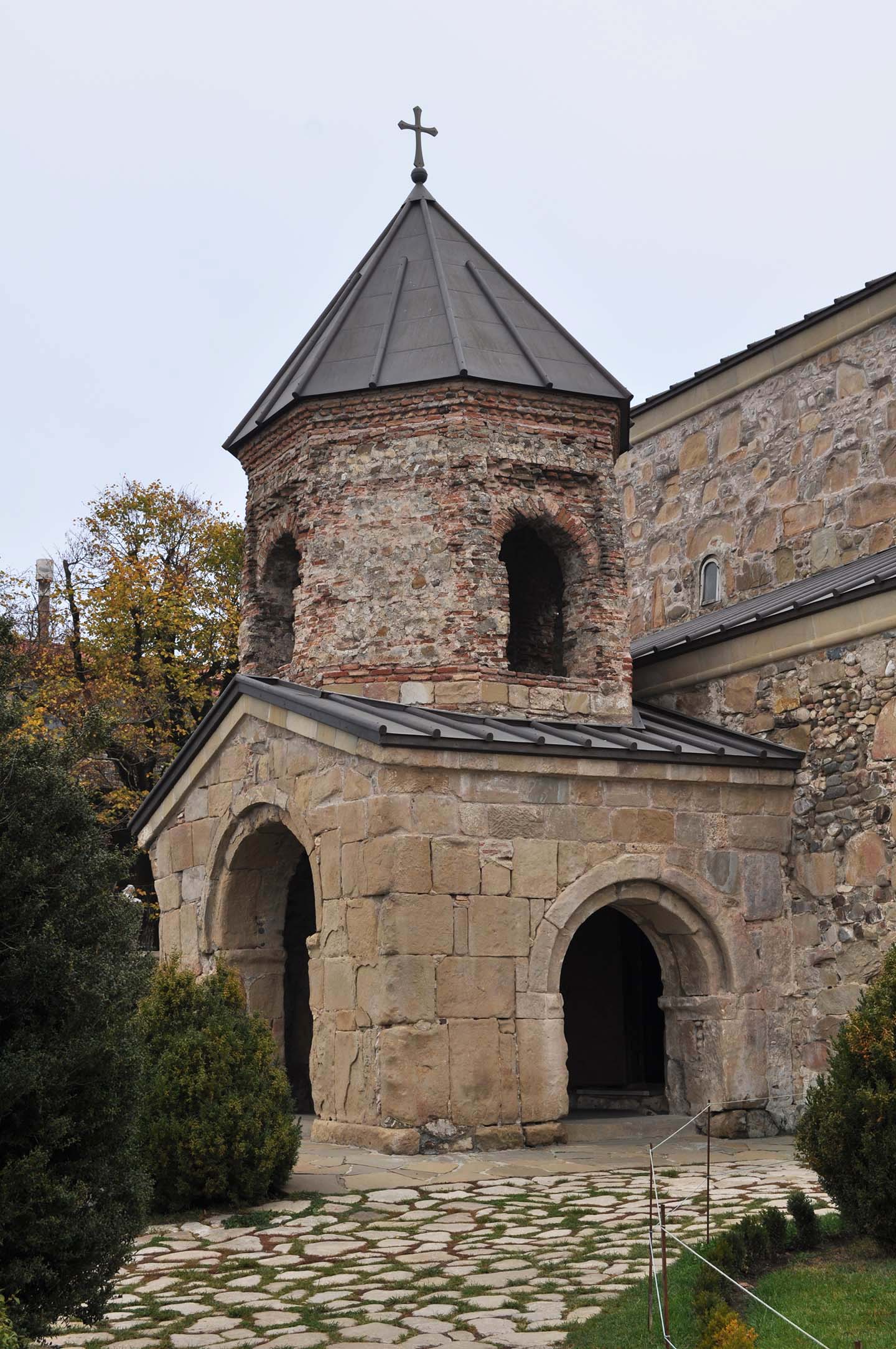 The southern porch and the belfry

The main door to the church is from the south. An arched porch constructed in the ninth or tenth centuries precedes the entrance to the church. An octagonal belfry with a pyramidal roof was added atop the porch in the eighteenth century as well as a defensive circuit wall surrounding the precinct from three sides.