Vardzia’s rock-hewn architectural ensemble is situated in historic Meskheti, South Georgia, on the left bank of the river Mtkvari. It served as fortification, as well as religious and habitation purposes, and has outstanding artistic and historical significance.

It is one of the most fascinating and important examples of rock-cut sites, not only in Georgia, but also worldwide. 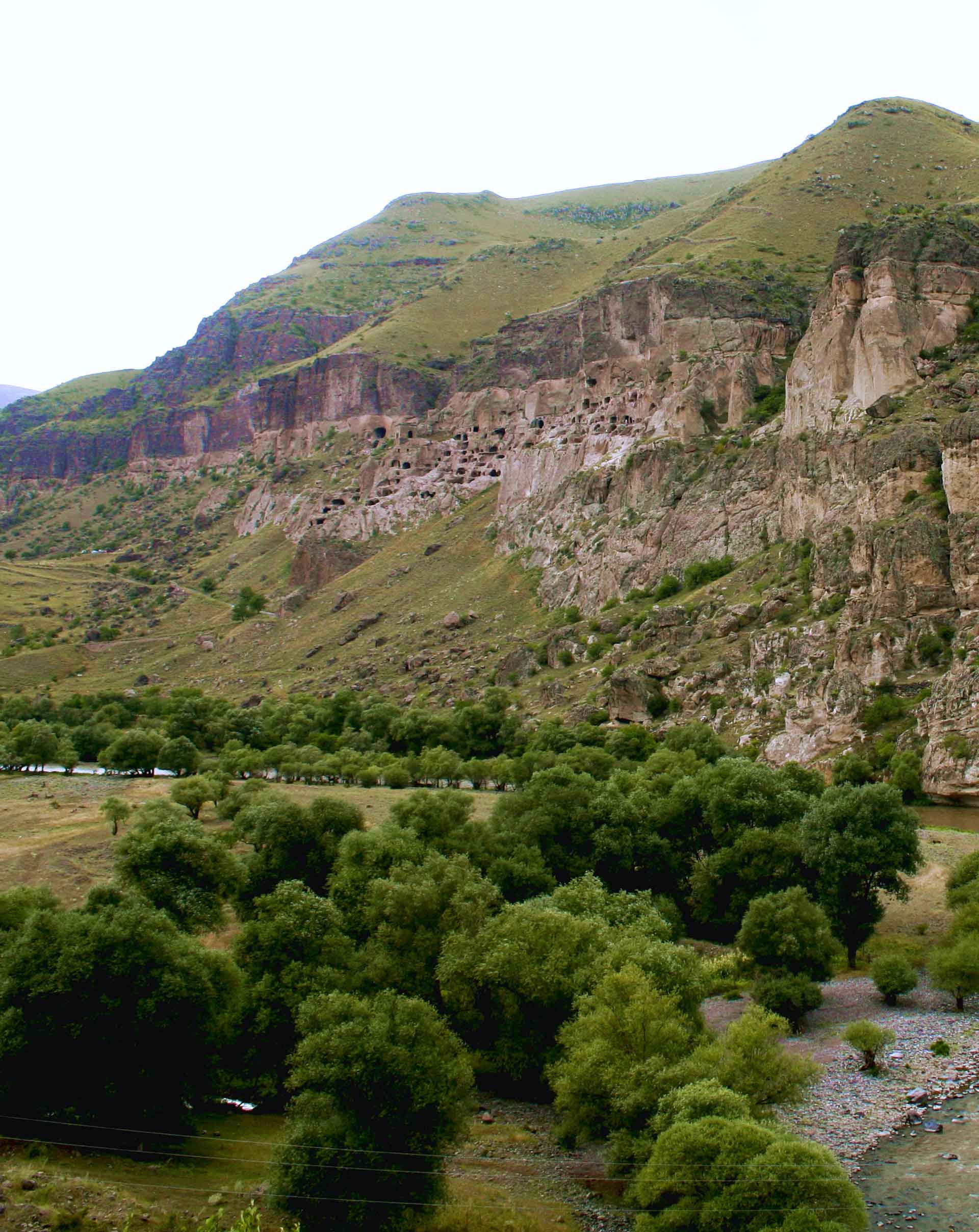 With its grand dimensions, Vardzia displays a high level of engineering. It was carved into a 500-metre long section of the cliff, and consists of 13 levels. There are more than 600 cave premises located within it, representing a unified, mobile, and well-thought out structure with passageways, back streets, and living cells in an enfilade system that is linked together by stairways. The complex was equipped with a plumbing system and drinking water. Rooms for different purposes can also be encountered here: the so-called “Pharmacy”, “Tamar's Hall”, “Salkhino – the Banquet Room”, “The Refectory”, “Marani” - the wine cellar, etc.

The construction of Vardzia is usually associated with the names of King George III (1156-1184) and his daughter, Queen Tamar (1186-1213). Nevertheless, archaeological explorations have revealed much earlier layers as well. 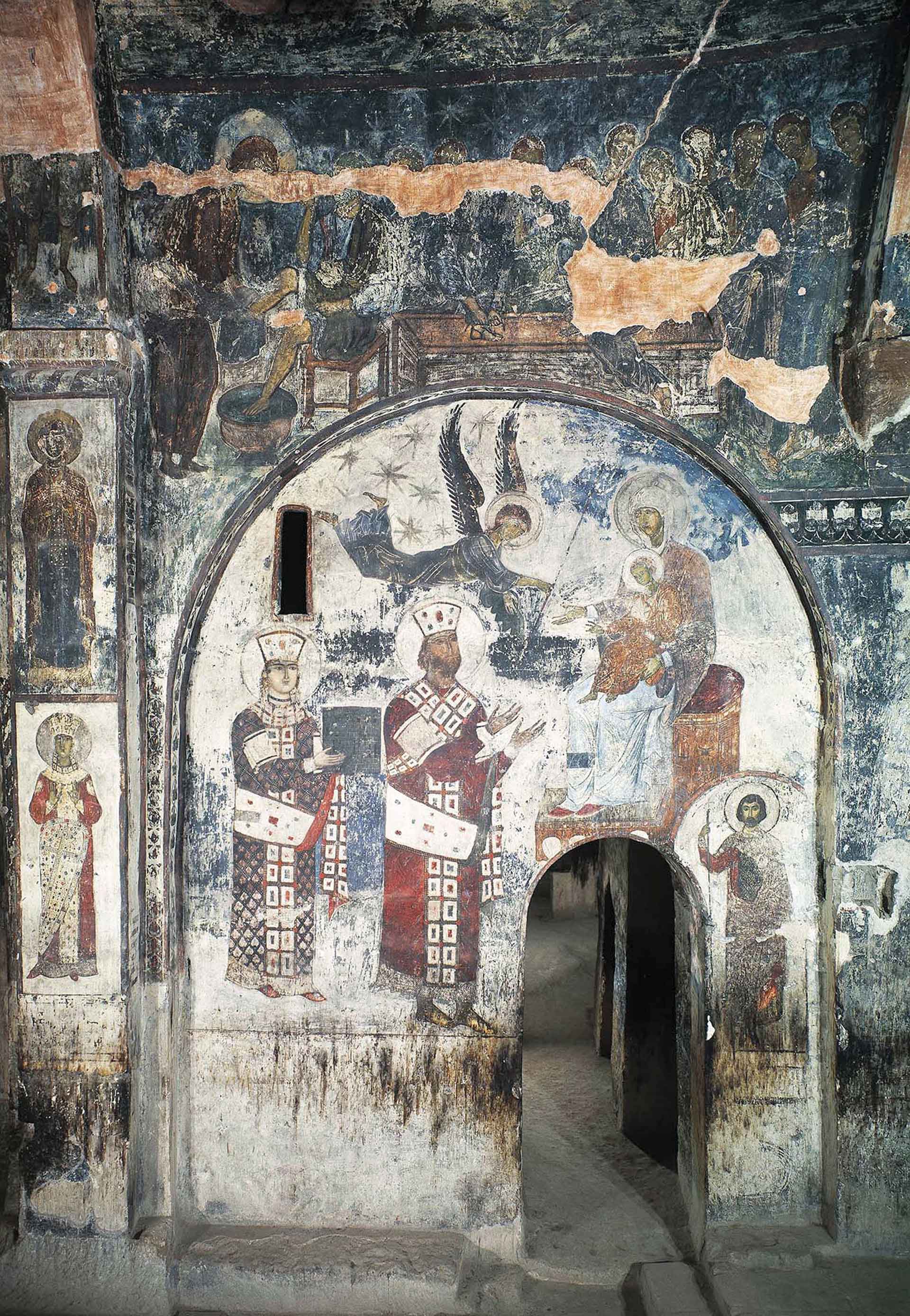 Vardzia monastery was created in the most brilliant epoch of Georgian statehood and culture - during the reign of Queen Tamar (1184-1212.), who was the only woman from the Bagrationi royal house to rule in her own right, and is referred to with the title of King. She was renowned for her wisdom, virtues and beauty, and has been canonized by the Georgian Church. During her reign, Georgia became one of the most powerful states in the Near East and the Caucasus. 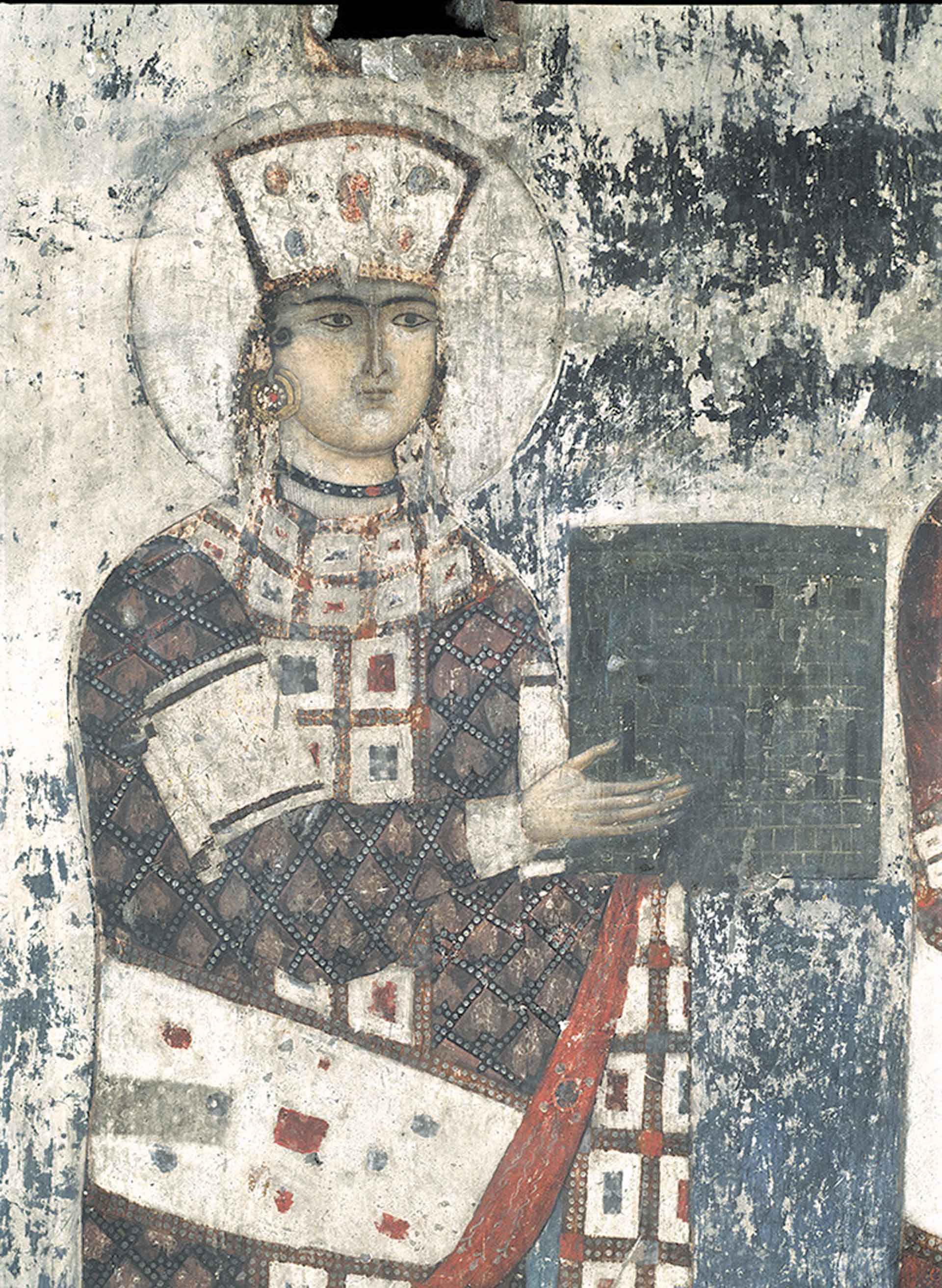 The centre of the whole ensemble is the church of the Dormition of the Virgin, a hall church with an annex from the south. The church is hewn into the body-rock, and only the two large arches of the tall porch on the south façade and fragments of the belfry were built from ashlar (13th -14th cc.).

The interior of the church is entirely decorated with murals (1186) that rank among the masterpieces of medieval Georgian art. 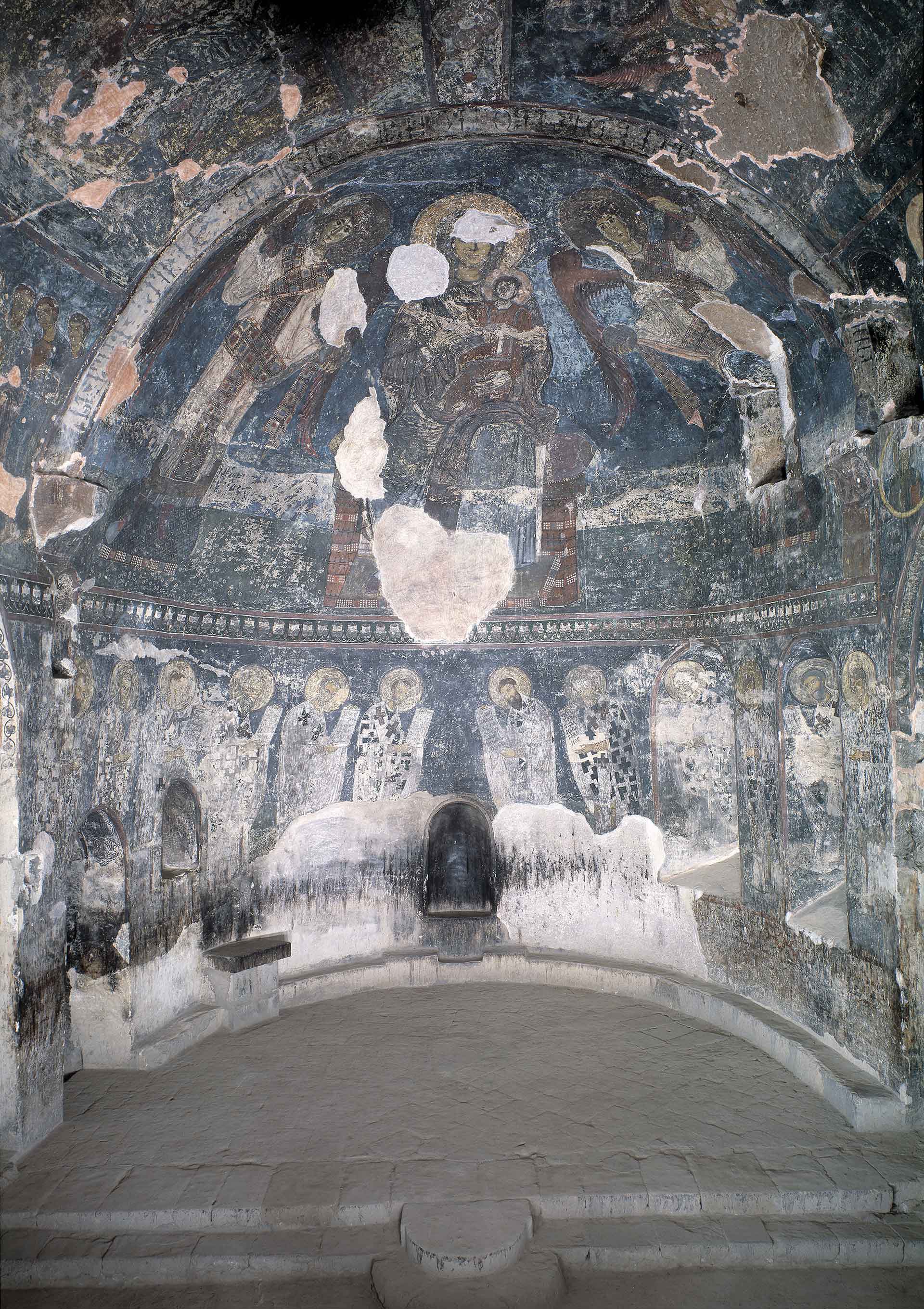 The Virgin Hodgitria is illustrated in the apse, flanked with archangels and a row of Holy Bishops in the lower tier. The cycle of the Great Feasts is depicted on the vault and the walls. On the north wall there is a representation of King Giorgi III and his daughter Queen Tamar interceding with the enthroned Virgin, and a figure of an angel hovering above them bearing the royal insignia. On the west part of the same wall, the figure of the ktetor – eristavt-eristavi Rati Surameli – is also depicted in intercession with the Virgin. 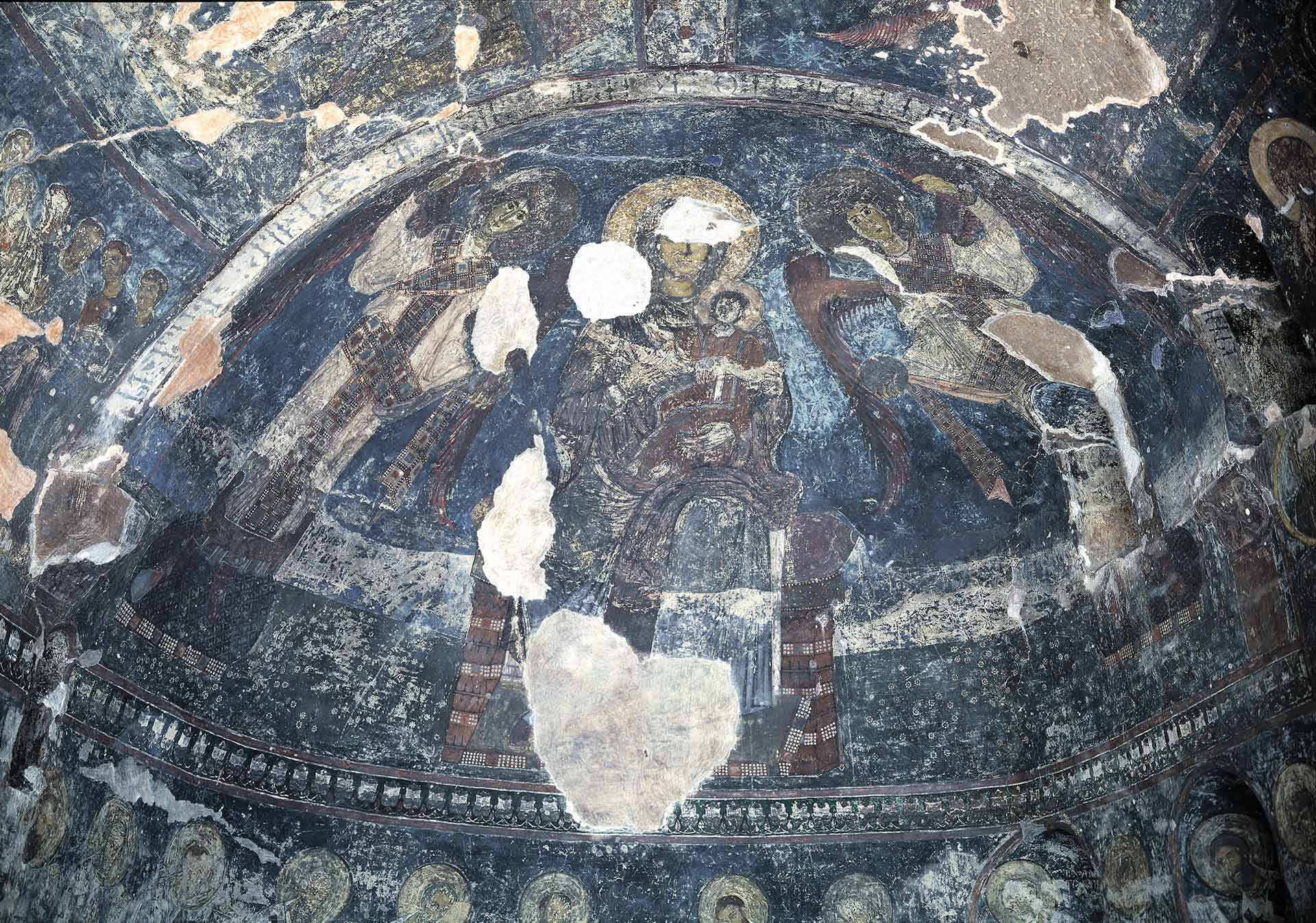 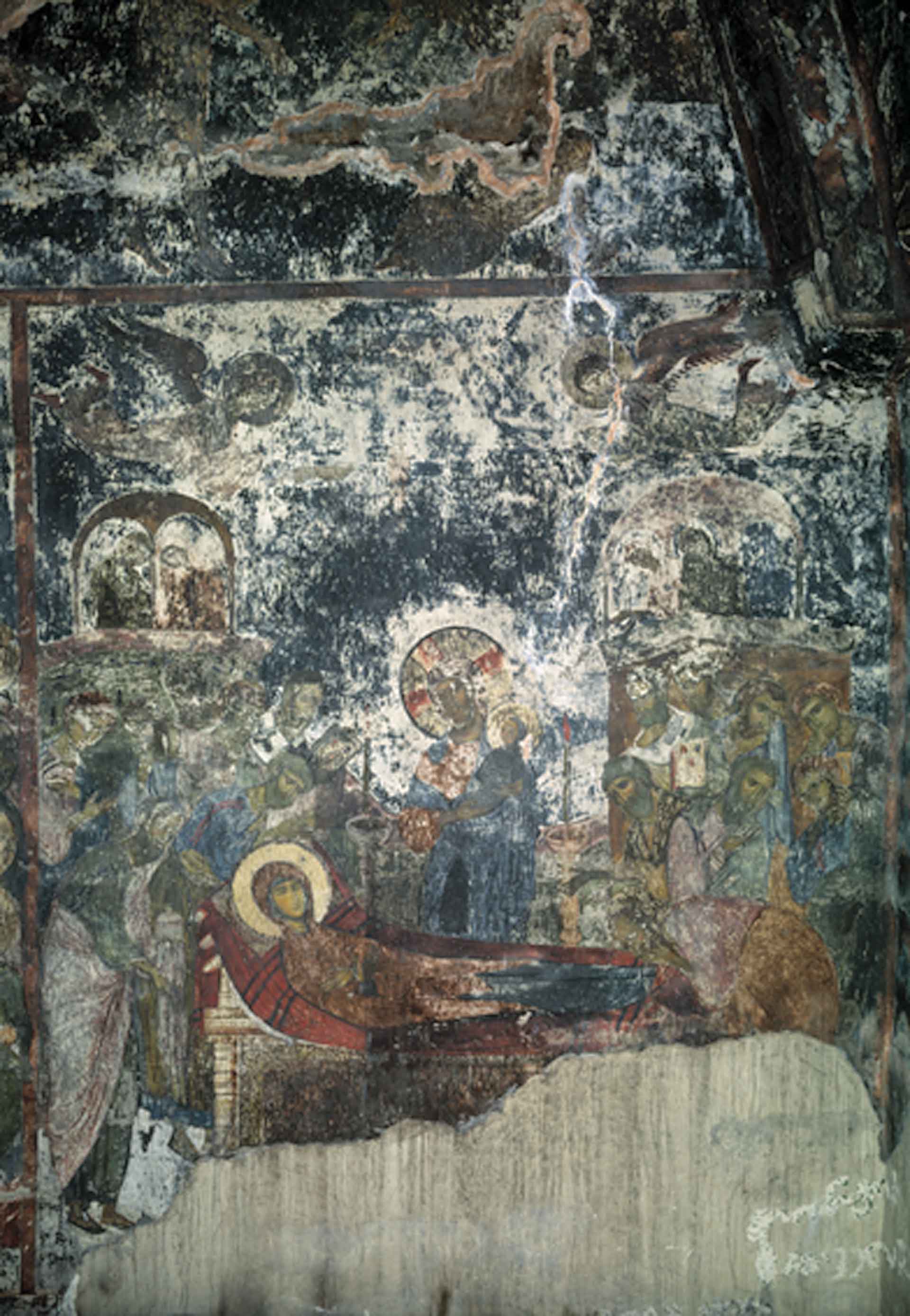 The painting reveals the workmanship of high class artists, and is distinguished for its refined and spiritual images of the saints, brilliant colouring, classical proportions, elegant movements, refined drawing and dramatic emotions, on blue and green backgrounds with shining stars and beautiful bluets.  Numerous figures of saints, including St. Nino, the Illuminiatrix of Georgia 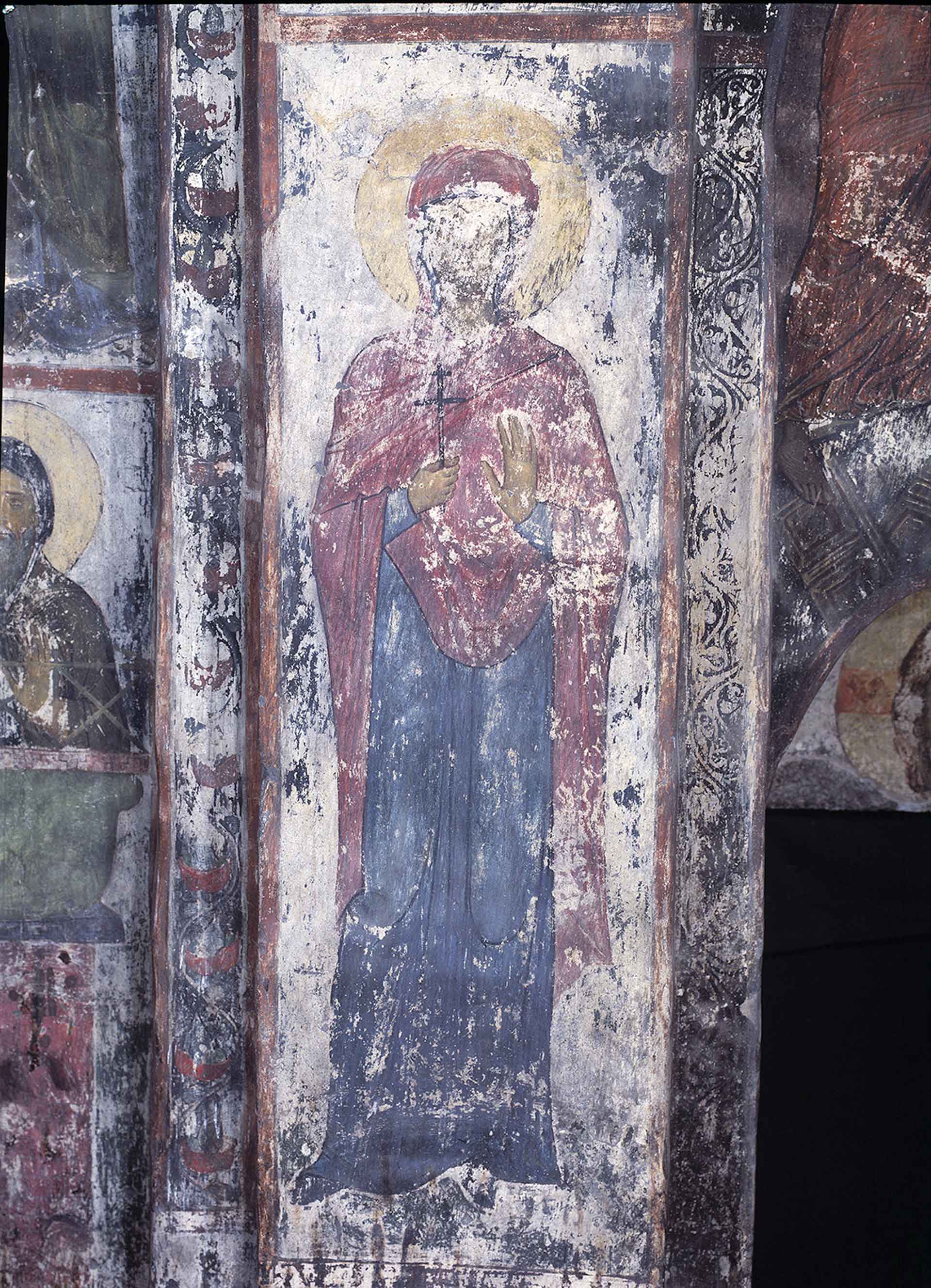 and  the Holy Warriors are portrayed on the walls and pilasters of the church along with a rare image of the Communion of St Mary of Egypt. 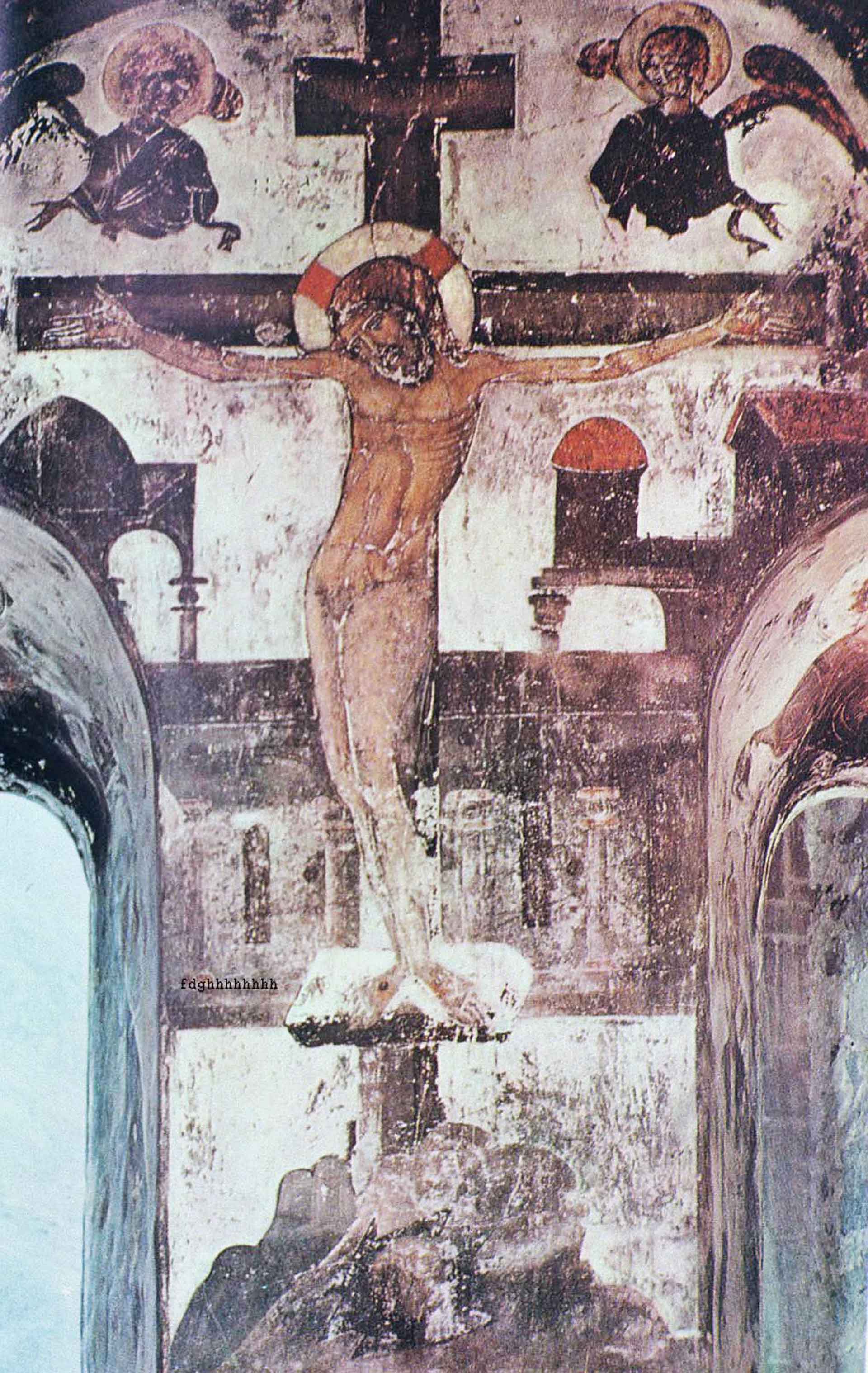 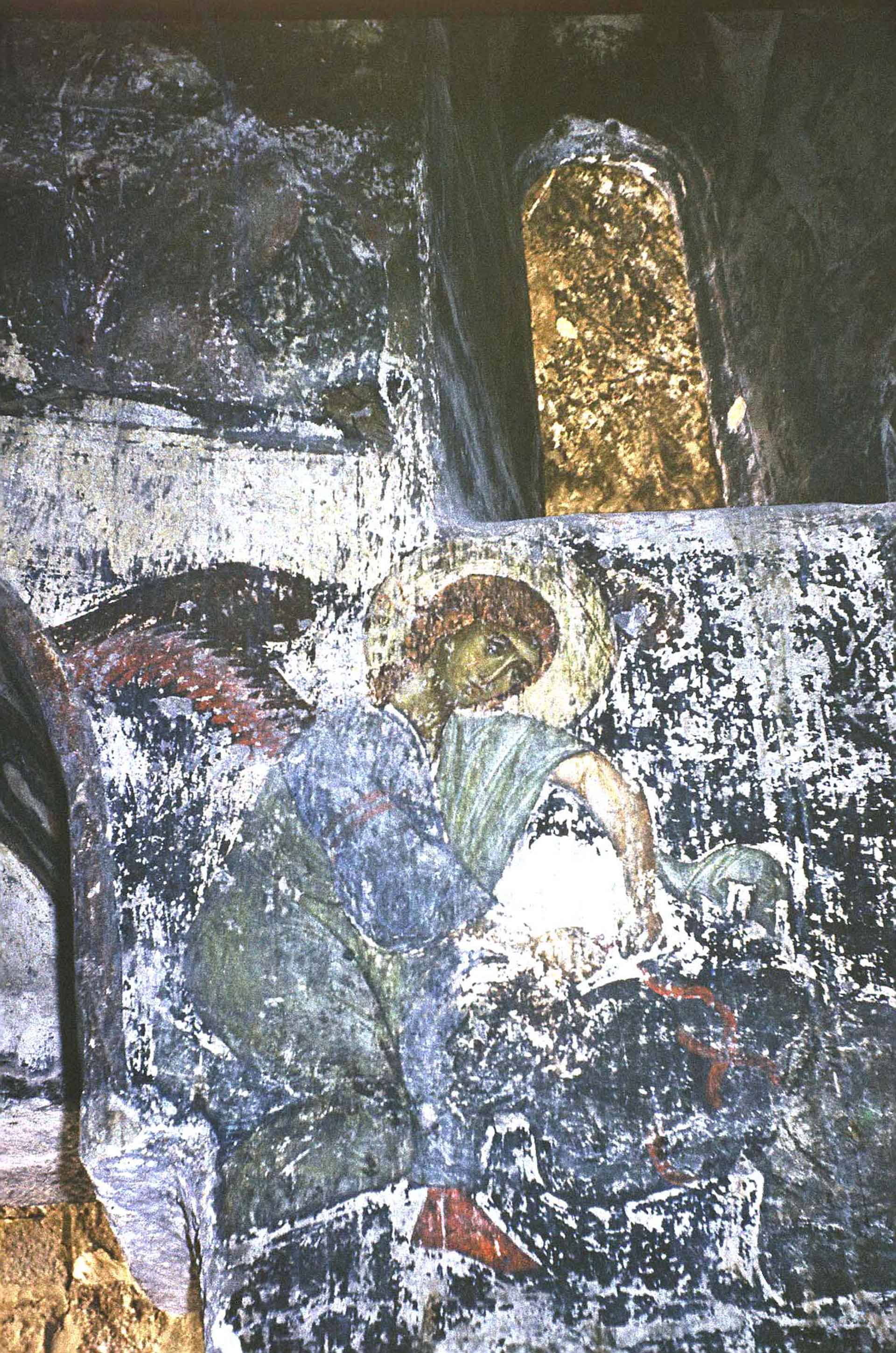 The most exceptional images are those of the Crucifixion, the Anastasis on the south wall, and the Mandylion in the tympanum of the south door. 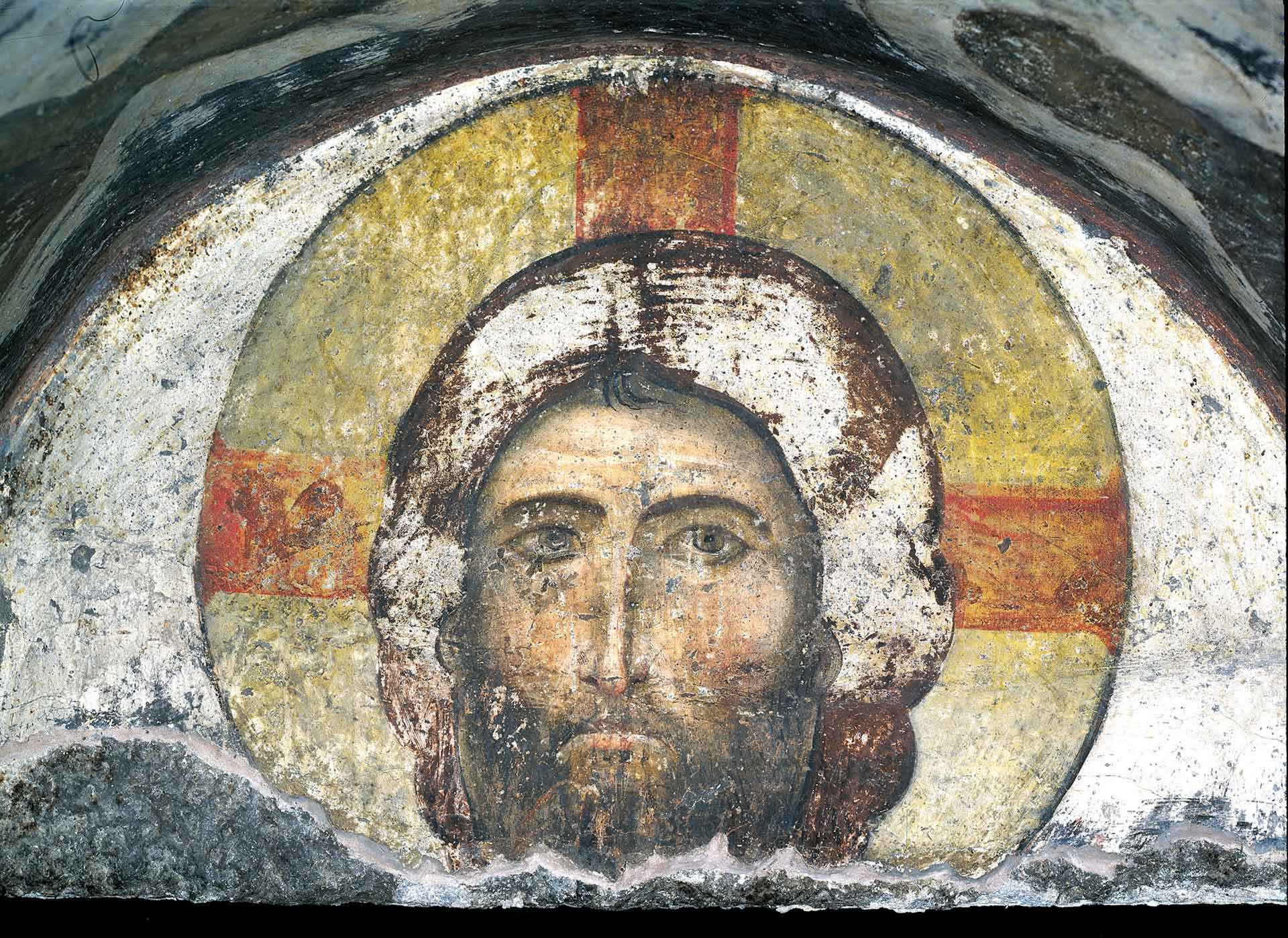 The grand composition of the Last Judgment, dated to the mid 13th c, is depicted on the walls of the south annex, along with the Deesis in the small apse. 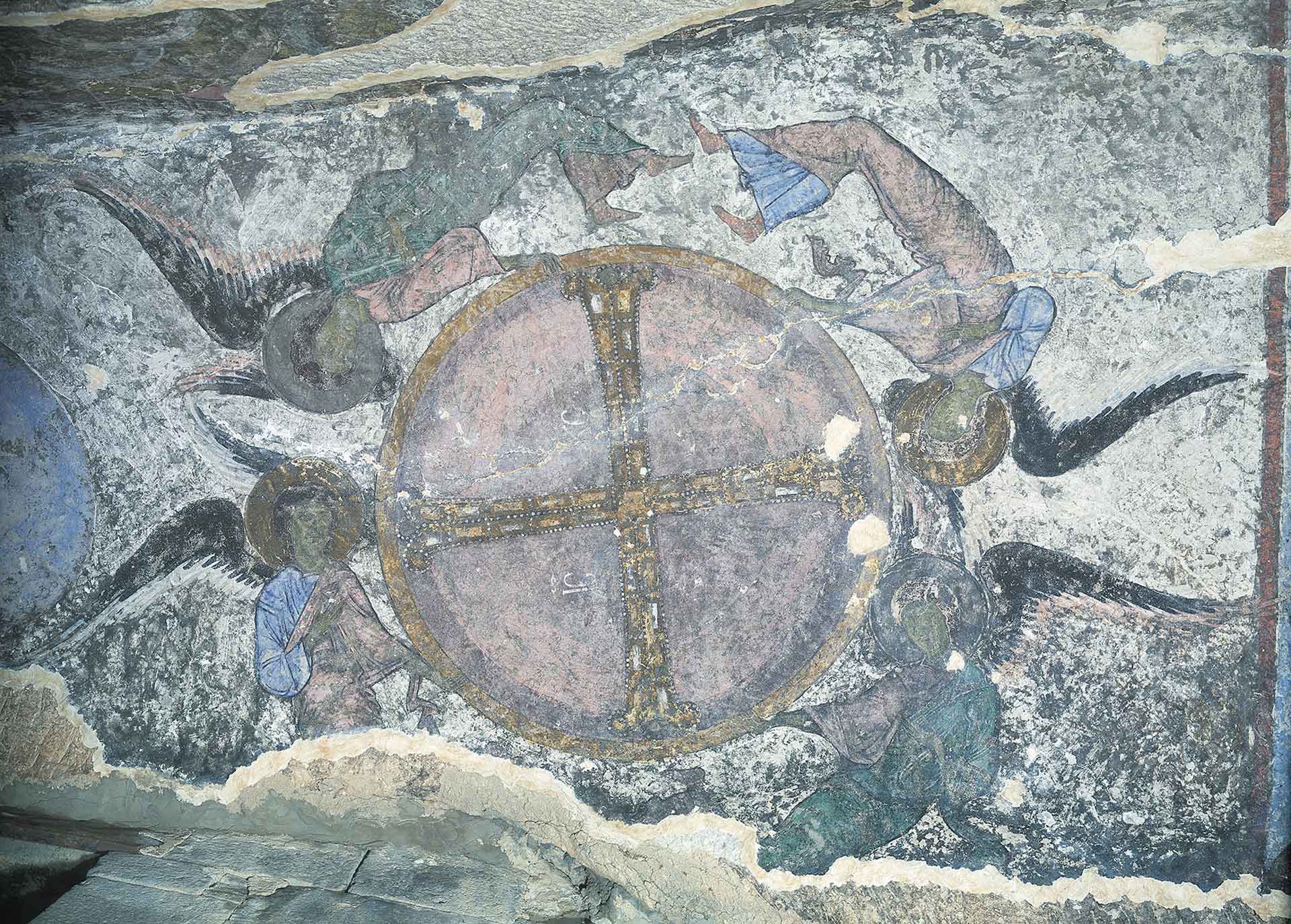 In the grand ensemble of Vardzia – the monastery and fortress – the Ananauri settlement must also be mentioned: one of the oldest parts of this site is dated to the 10th -12th cc. The church of the settlement is decorated with 15th c murals, and the western annex with a wall painting from the first half of the 13th c. that includes a scene of the coronation of King Lasha-Giorgi (1213-1223), son of Queen Tamar. 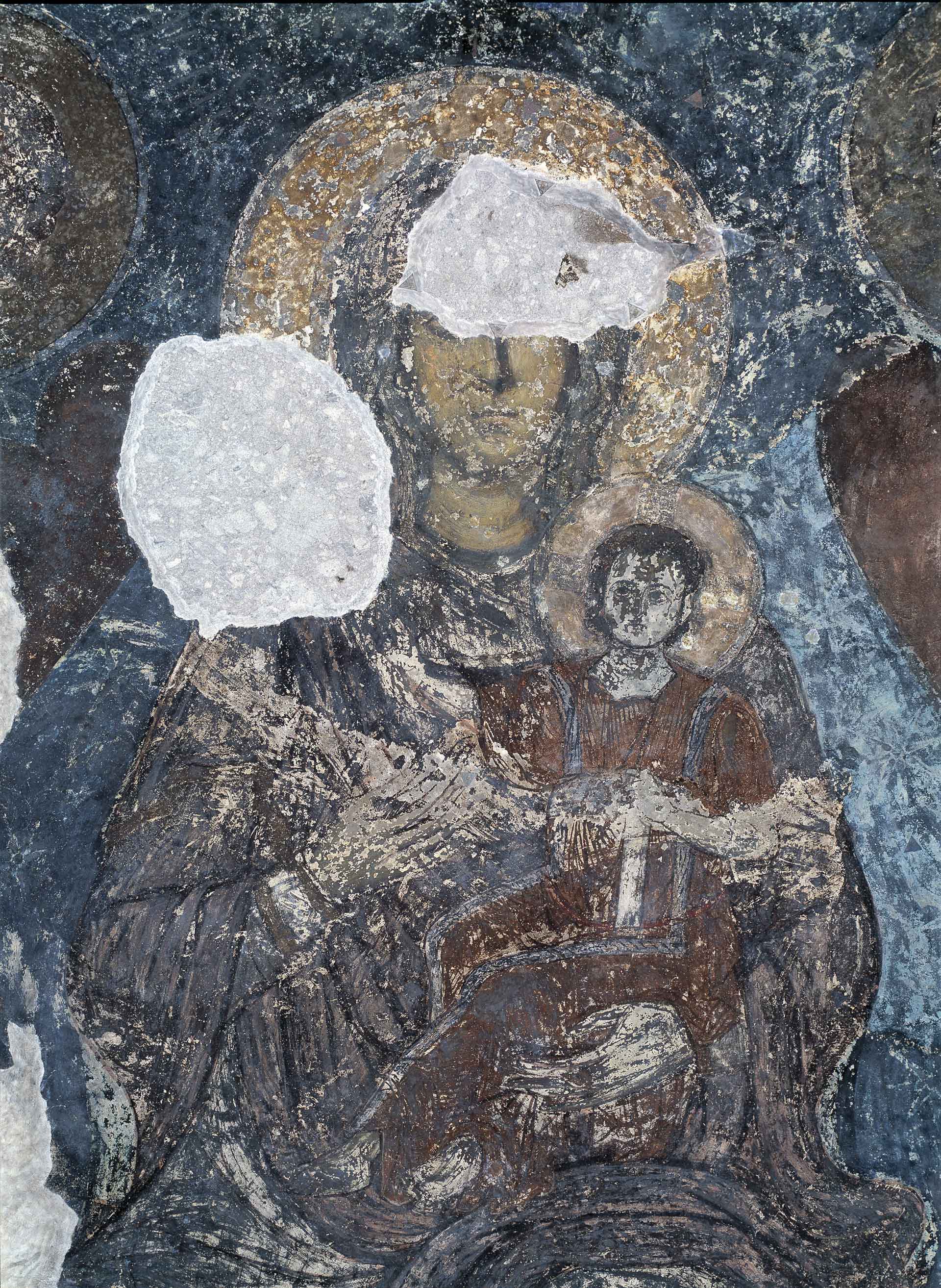 In spite of the ravages caused by time, natural phenomena (earthquakes) and vandalism, Vardzia’s wall paintings still represent the best artistic and spiritual art of Georgia, and remain one of the country’s top tourist attractions.