Vakhtang Chabukiani is buried in Tbilisi’s Mtatsminda Pantheon – the most prominent location in Georgia to express respect for and acknowledgement of an individual. Nevertheless, the artist encountered numerous obstacles during his lifetime. 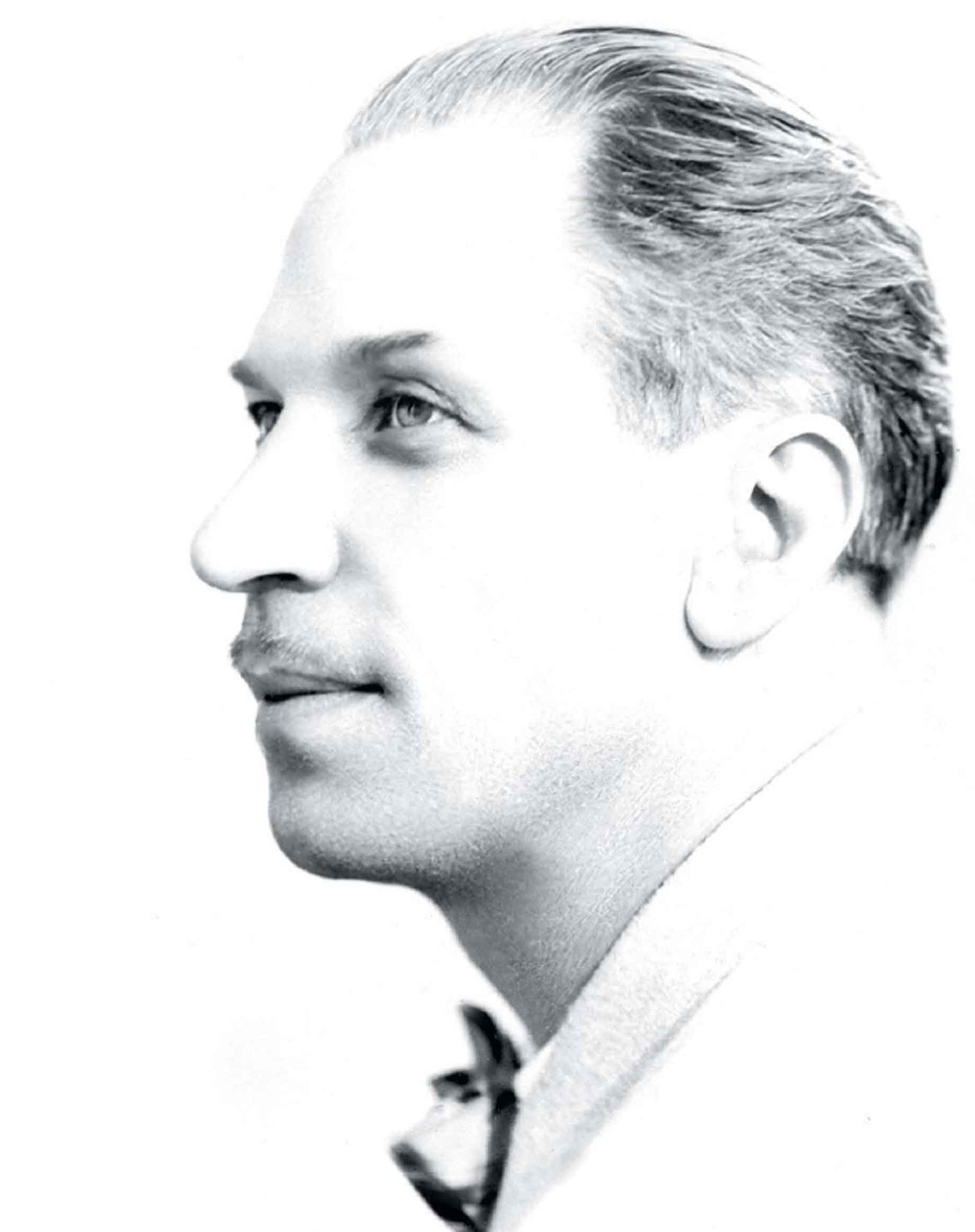 Chabukiani was nine years old when he was asked to bring Christmas tree decorations from the Chevalier art workshop to Maria Perini’s ballet studio. At that time, he did not even have a primary education. At Perini’s studio he witnessed the amazing universe of ballet in action. He later wrote: “Everyone’s childhood enshrines luminous, pleasant fairy tales… This is the world from where Maria Perini descended to us.” 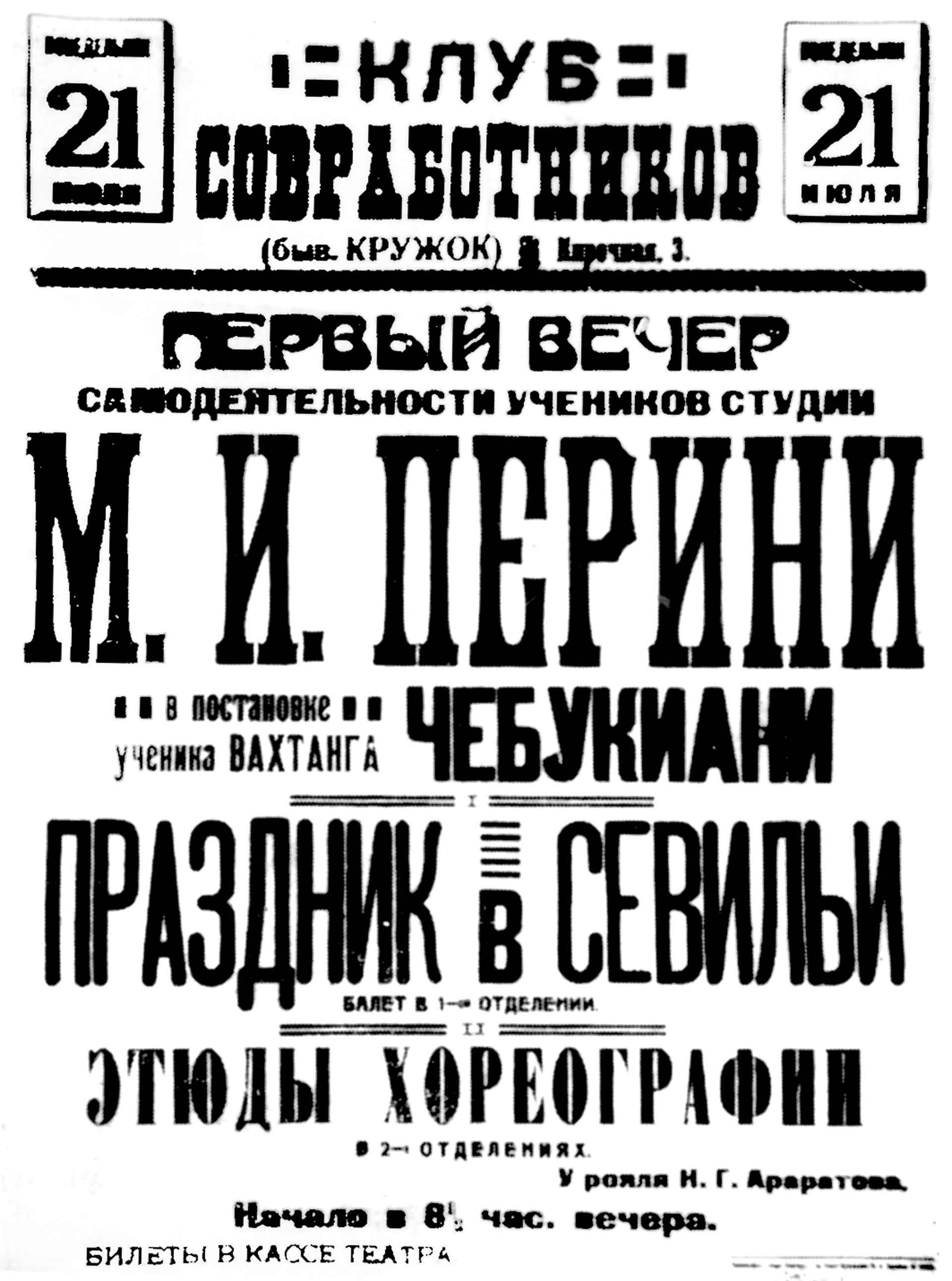 Italian dancer Maria Perini decided to stay in Tbilisi after a concert tour at Tbilisi Opera House, and she soon after opened the city’s first studio of classical dance. Later its graduates, among them Vakhtang Chabukiani, shaped the future of Georgian ballet. Before her return to Italy, Perini attended the premiere of the first Georgian ballet performance choreographed by Chabukiani. It left her with the extraordinary feeling that her work had brought about significant results; Chabukiani became a phenomenal dancer and Georgian ballet embarked upon the path of a hopeful future.

But success was preceded by years fraught with difficulties. After having graduated from Perini’s studio, Chabukiani accepted dance work wherever he could so as to earn some money. Together with Elene Chikvaidze, a fellow student from the dance studio, he performed at movie theatres before the screenings began. At the same time he choreographed several pieces. 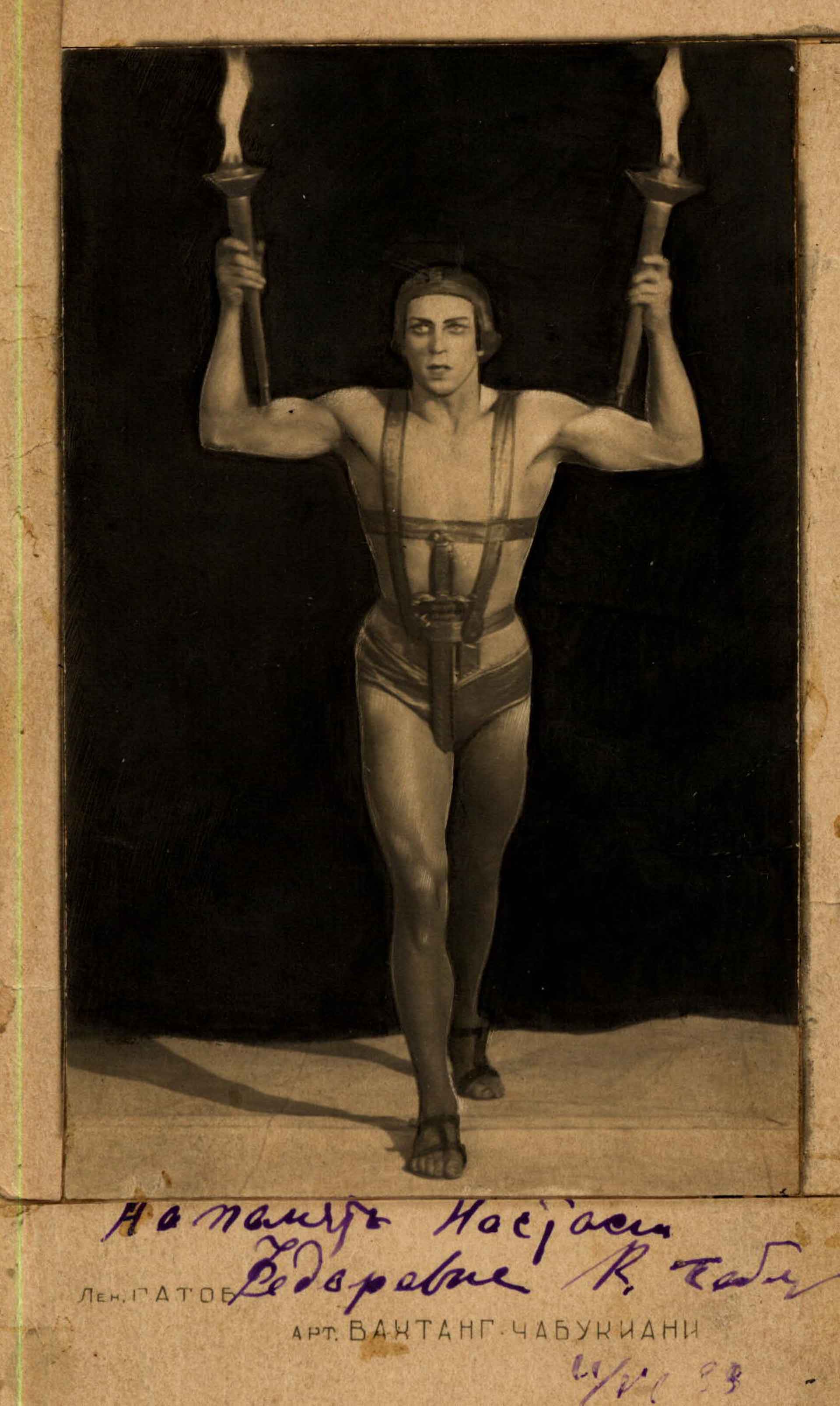 Chabukiani travelled to Leningrad with money that his friends had raised for him. At the school of choreography he was told that aged 16 he could only attend evening classes. However, the way he presented himself in the rehearsal hall captured the interest of the notoriously strict headmaster of the school, Agrippina Vaganova - a renowned figure in the ballet world. Contemporaries recalled Vaganova’s exclamations of amazement when Chabukiani put on pointe shoes to imitate variations of Princess Aurora, and performed eight consecutive pirouettes.

In 1929 virtuoso Chabukiani was taken on at the Imperial Mariinsky Theatre, which by that time had already been renamed the Kirov Theatre. His first appearance there turned out to be a sensation. Tatiana Vecheslova, his partner, and prima ballerina, recalled the whole city talking about his performance in Don Quixote. ”Vakhtang came onto the stage during the break. Even his everyday walk was perceived as a dance. His expressive posture made the entire hall burst into applause… The audience started to applaud a dancer who had not even begun his performance.”

Current analysis of Chabukiani’s works is now based on several preserved videos that were made about 70 years ago. His performances in Minkus’s Baiadera, Solovyov-Sedoi’s Taras Bulba, Asafyev’s Flames of Paris, and Krein’s Laurencia are indeed unique. His remarkable bodily proportions, his beautiful arms and expressive legs, and most importantly his incredible coordination all allowed him to perform magic on stage. 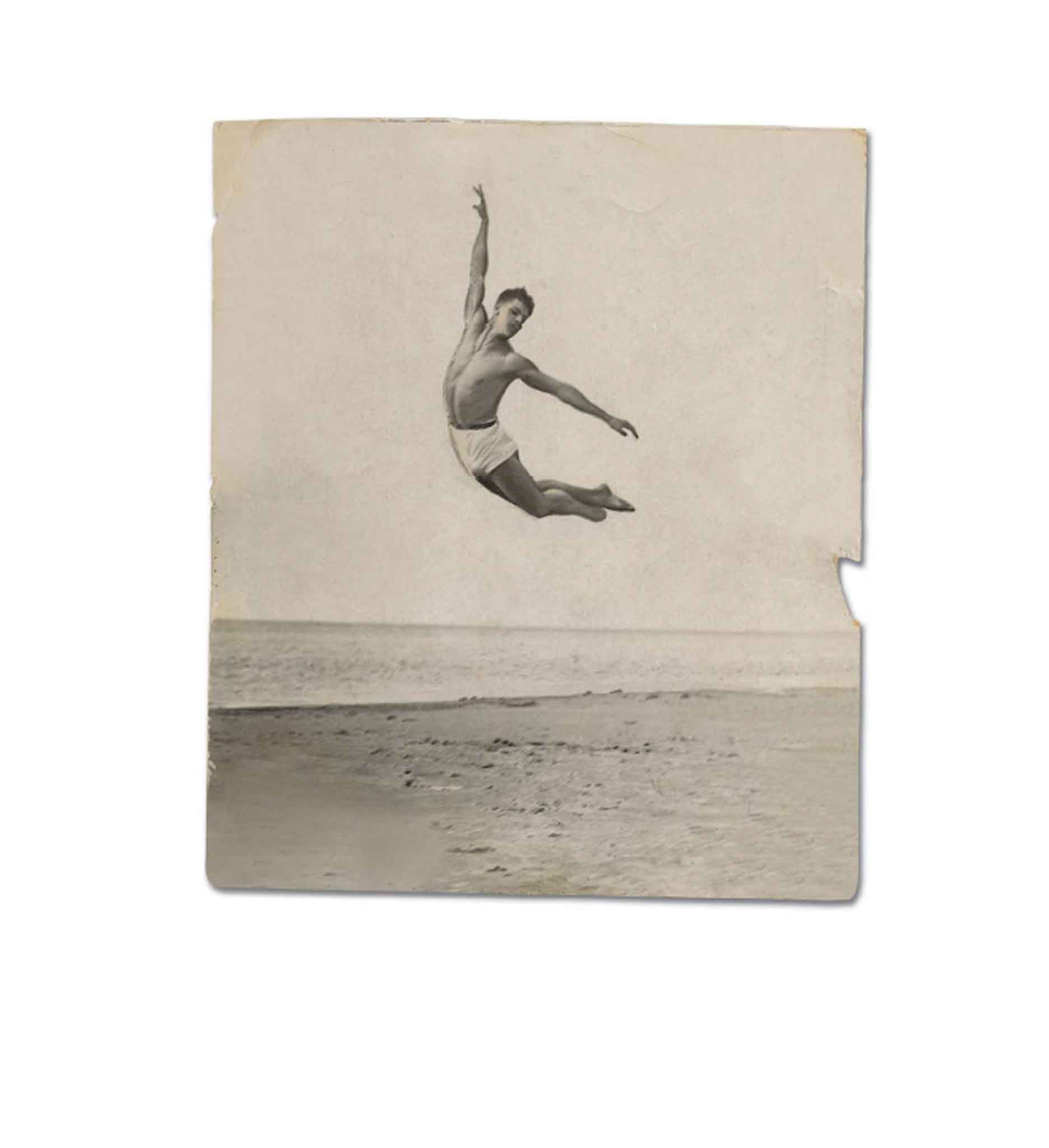 In 1934, Chabukiani and his dance charmed America as well. Together with Tatiana Vecheslova, he was the first Soviet dancer to visit the USA with a concert tour. His performance at New York’s Carnegie Hall should have served as a sign of his promising future. During the tour he met George Balanchine, who was making his first steps in America. At that time many famous émigré dancers of the Imperial Russian ballet were already performing in New York. Chabukiani, too, could have stayed in the US to pursue a career there, but he instead chose to return to his homeland. 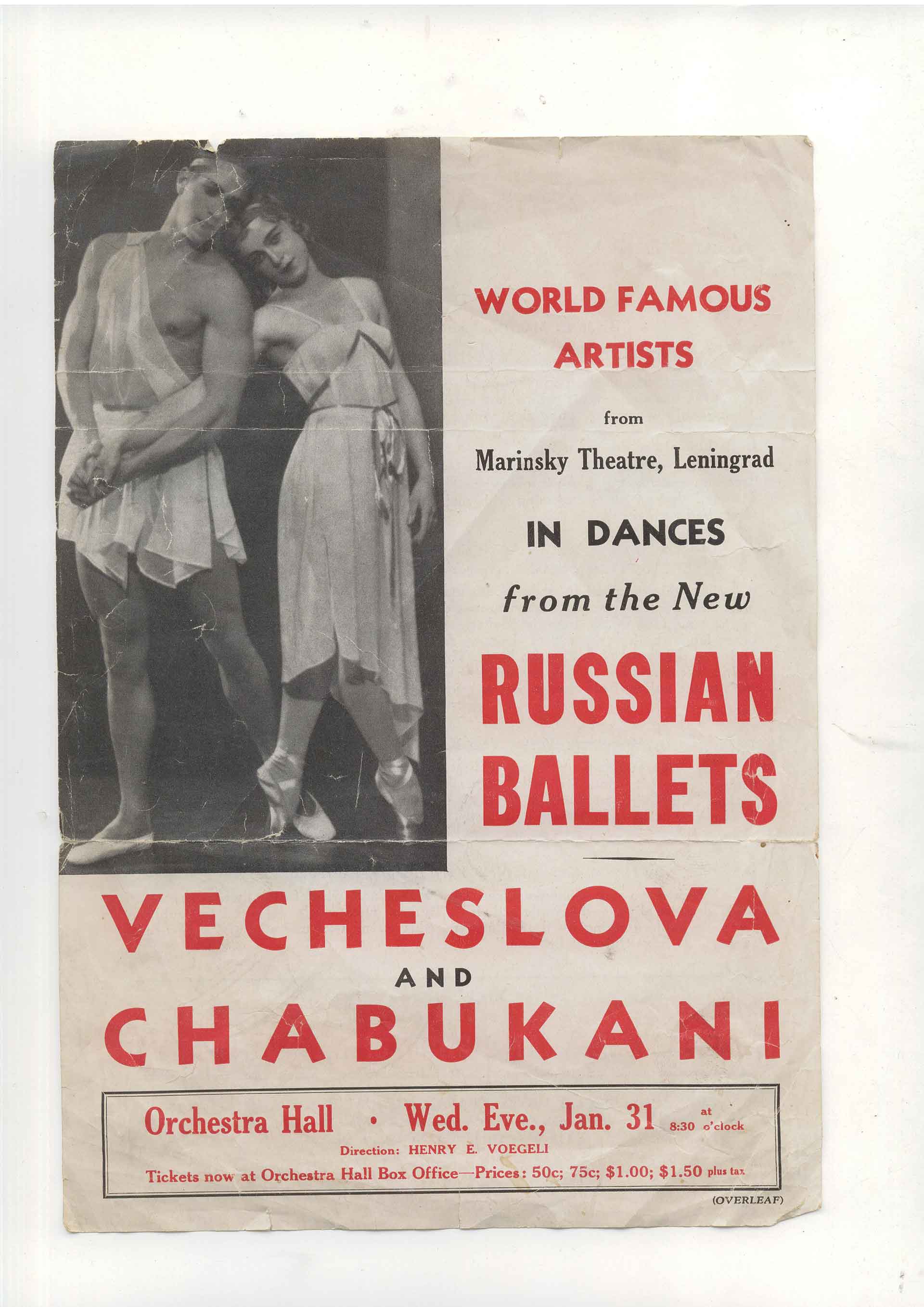 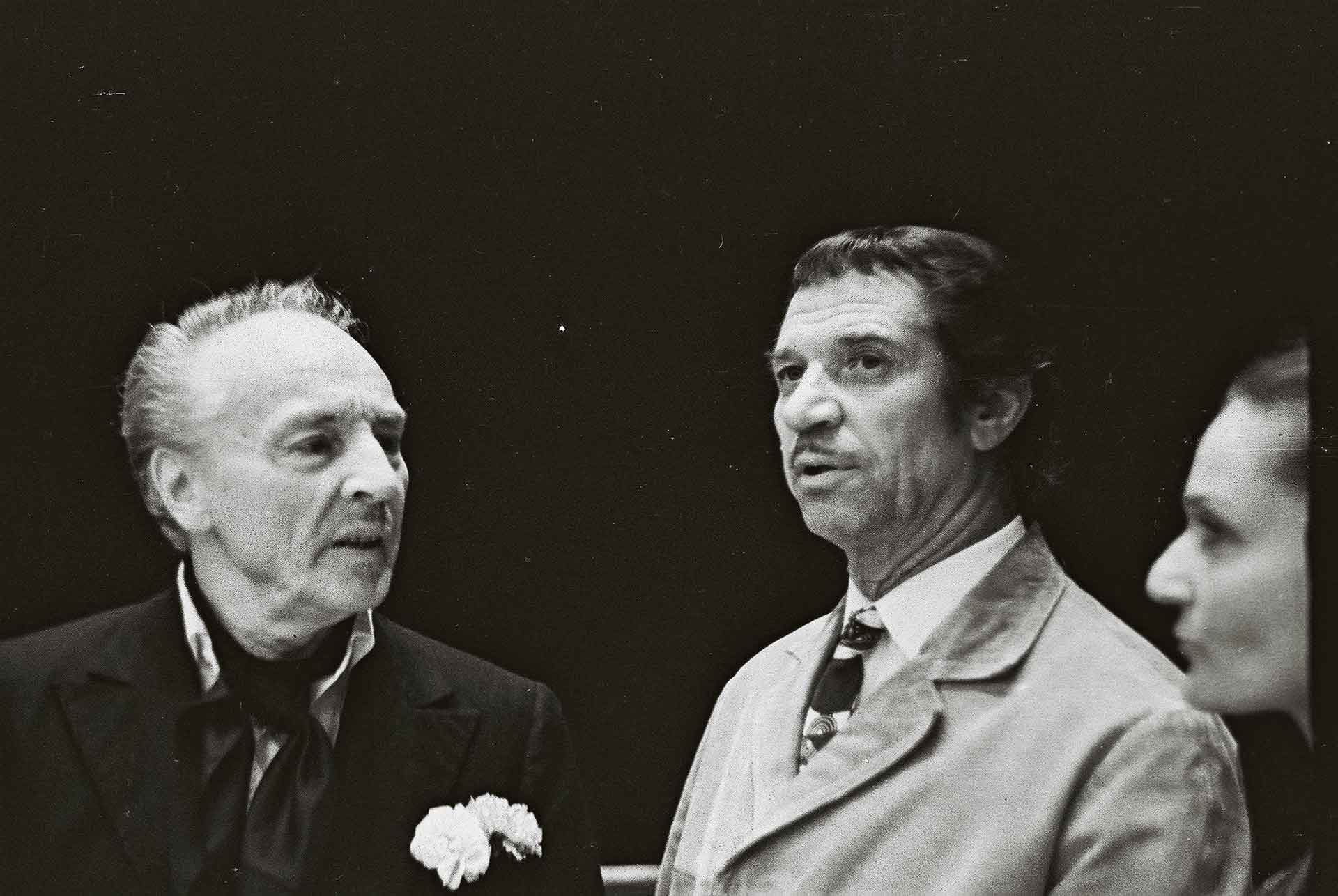 He did not stay in Leningrad either, where he had been enjoying celebrity status, but returned instead to Tbilisi. According to many, this act was prompted by patriotic sentiment. Maybe this was the case, but Chabukiani needed free space as a dancer and even more as a choreographer. At that time Tbilisi Opera House lacked a lead dancer and a lead choreographer. His first encounter with the Opera and Ballet Theatre of Tbilisi took place in 1936, when Chabukiani was personally invited from Leningrad to stage Andria Balanchivadze’s (George Balanchine’s brother) ballet The Prince Charming (Mzechabuki, later renamed The Heart of the Mountains). The consequent choreographic piece was based on Lope de Vega’s Spring of the Sheep. In Laurencia he personally performed virtuoso variations of Frondoso and other characteristic dances. As he had done in Leningrad, he performed the premiere of Laurencia in Tbilisi with his greatest partner and friend, Vera Tsignadze. 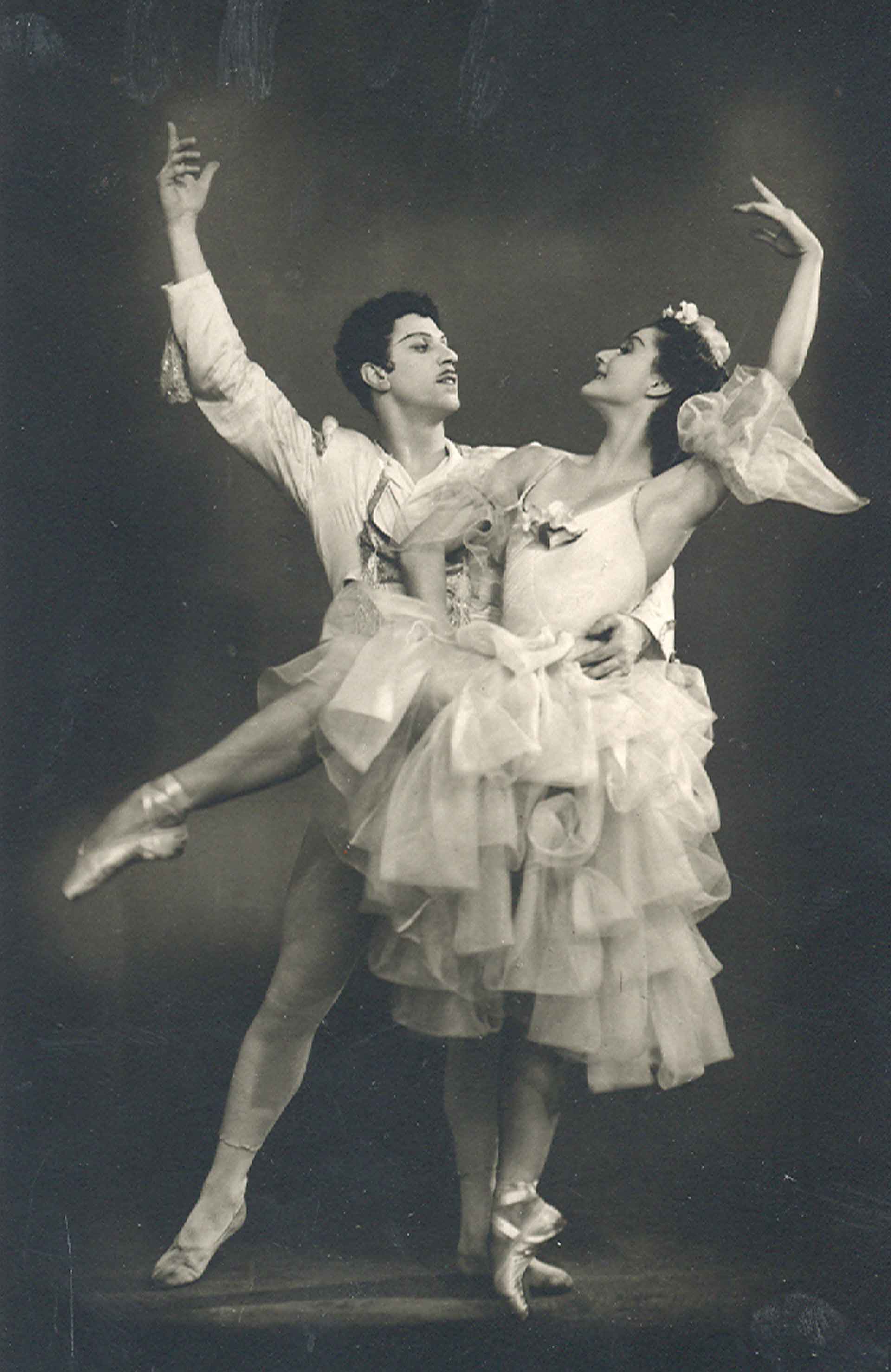 Tsignadze was his Laurencia and later his Desdemona in the famous play Othello, which he staged at the end of his career and which was subsequently made into a film. The throngs of people eager to see the 47-year-old artist’s Mauritanian dance had to be restrained by cavalry militia. 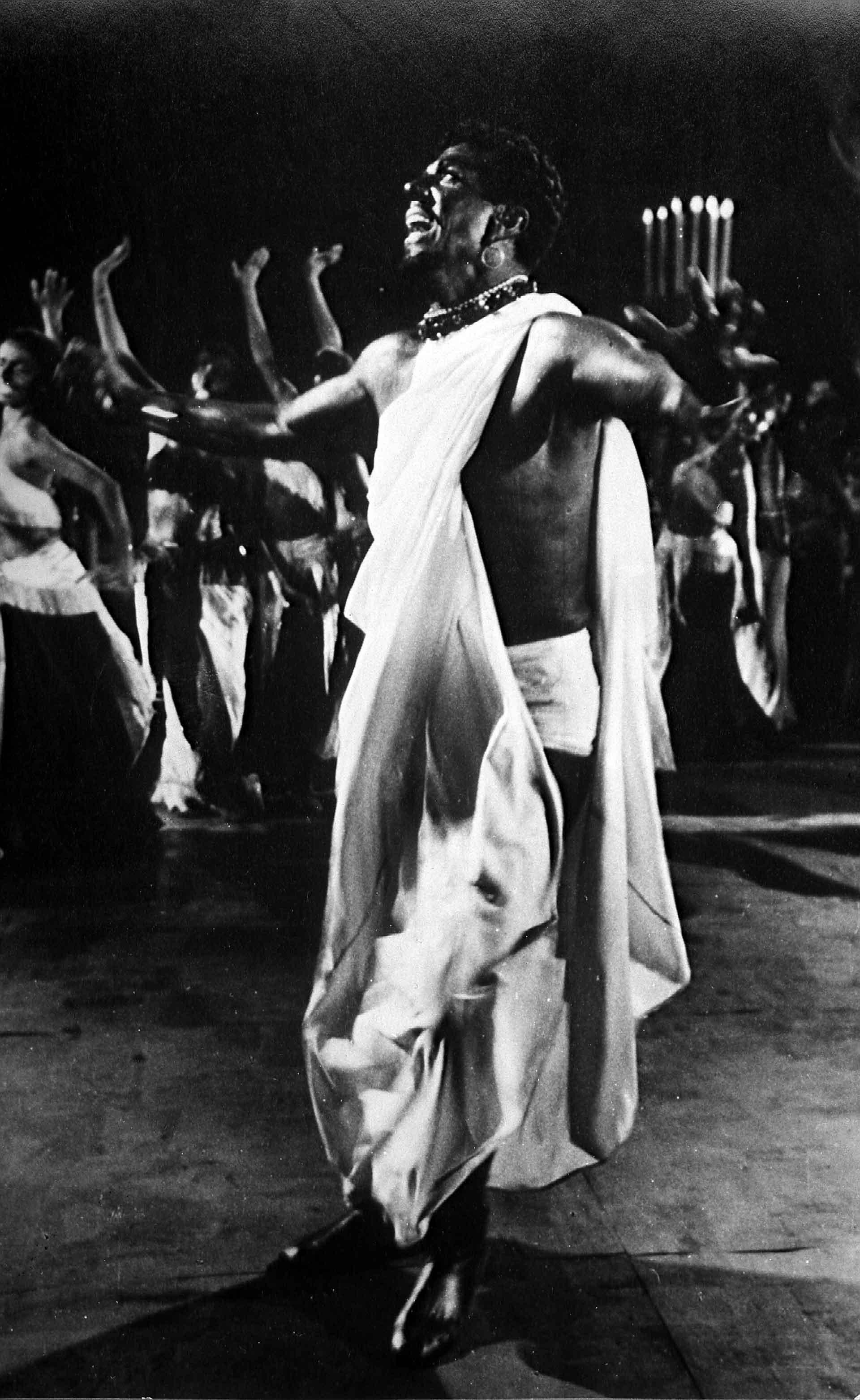 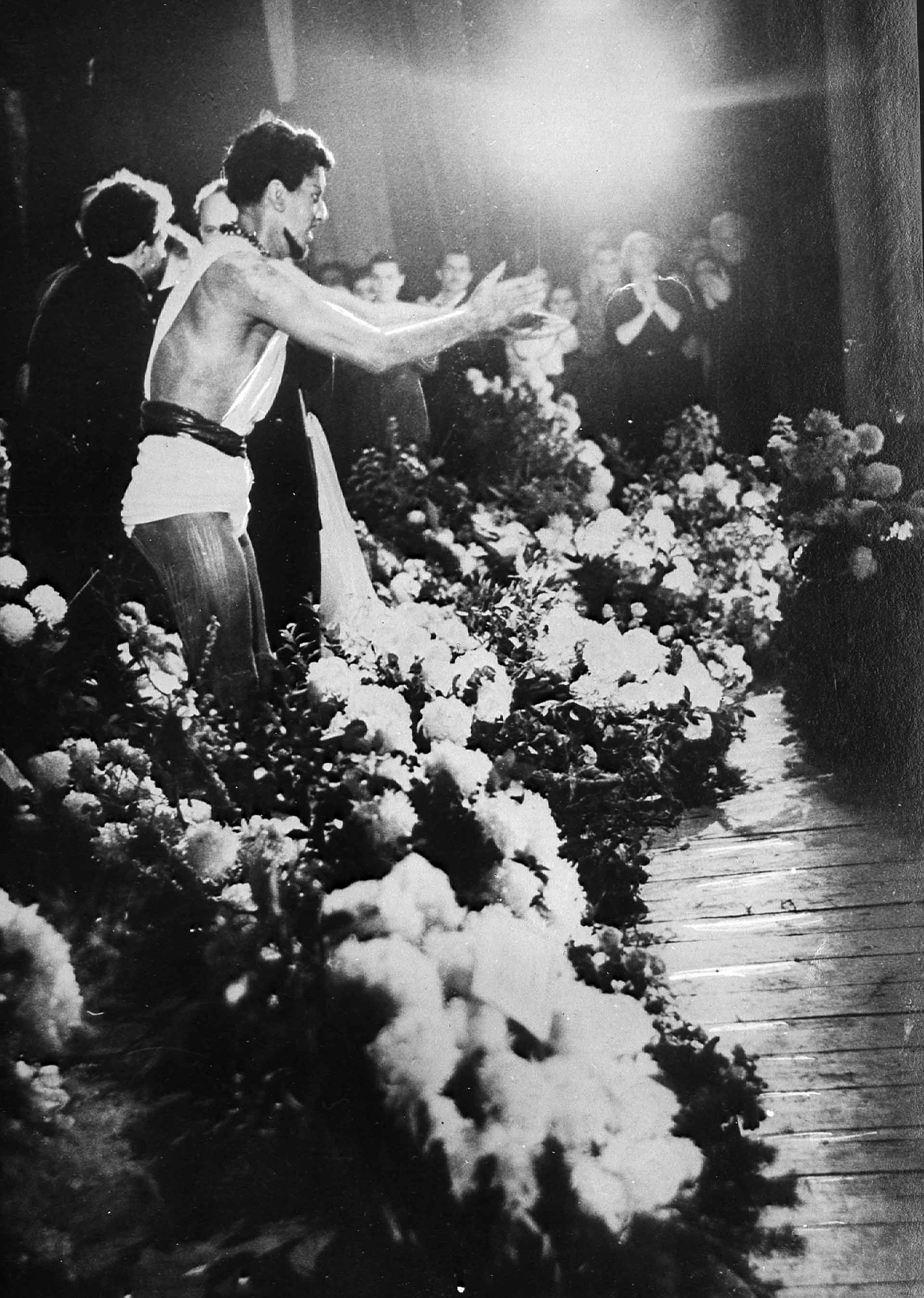 Chabukiani’s departure from the Tbilisi Opera and the School of Choreography ended in scandal. He was blamed for the 1973 fire at the theater, and was placed under observation. Rumors were spread about him. Chabukiani fell victim to the system he had served. Initially, he was seemingly praised for not having defected to the USA. However, he later became a person who was unacceptable to society. Moreover, his popularity and the looseness of his personal life turned into excuses for discontentedness and the basis for intrigues against him. The artist was forced to distance himself from the work he loved most of all. “I am a man of action, but they stripped me of this ability and caused me the greatest pain,” he said in one of his interviews.

Vakhtang Chabukiani at the Tbilisi State School of Ballet Art

In 2010 UNESCO celebrated Vakhtang Chabukiani’s centennial jubilee. The anniversary celebrations were organized in Tbilisi by Nino Ananiashvili, with the participation of world-renowned stars and his pupils. Nonetheless, his name deserves higher recognition in the world of ballet than it currently enjoys. It is a paradox that to this day his variations are staged by numerous classical ballet companies all over the world, but very often the name of the author is not mentioned or remains unknown. Chabukiani’s legacy was neither preserved in a complete collection of materials depicting his creative work nor in a study that would appraise his role. The dancer who became a legend during his lifetime is only remembered by those who were lucky enough to have witnessed live performances of “the wizard of dance.” Those who want to better understand his genius can watch the surviving videos that nowadays form part of Georgia’s unique cultural heritage. 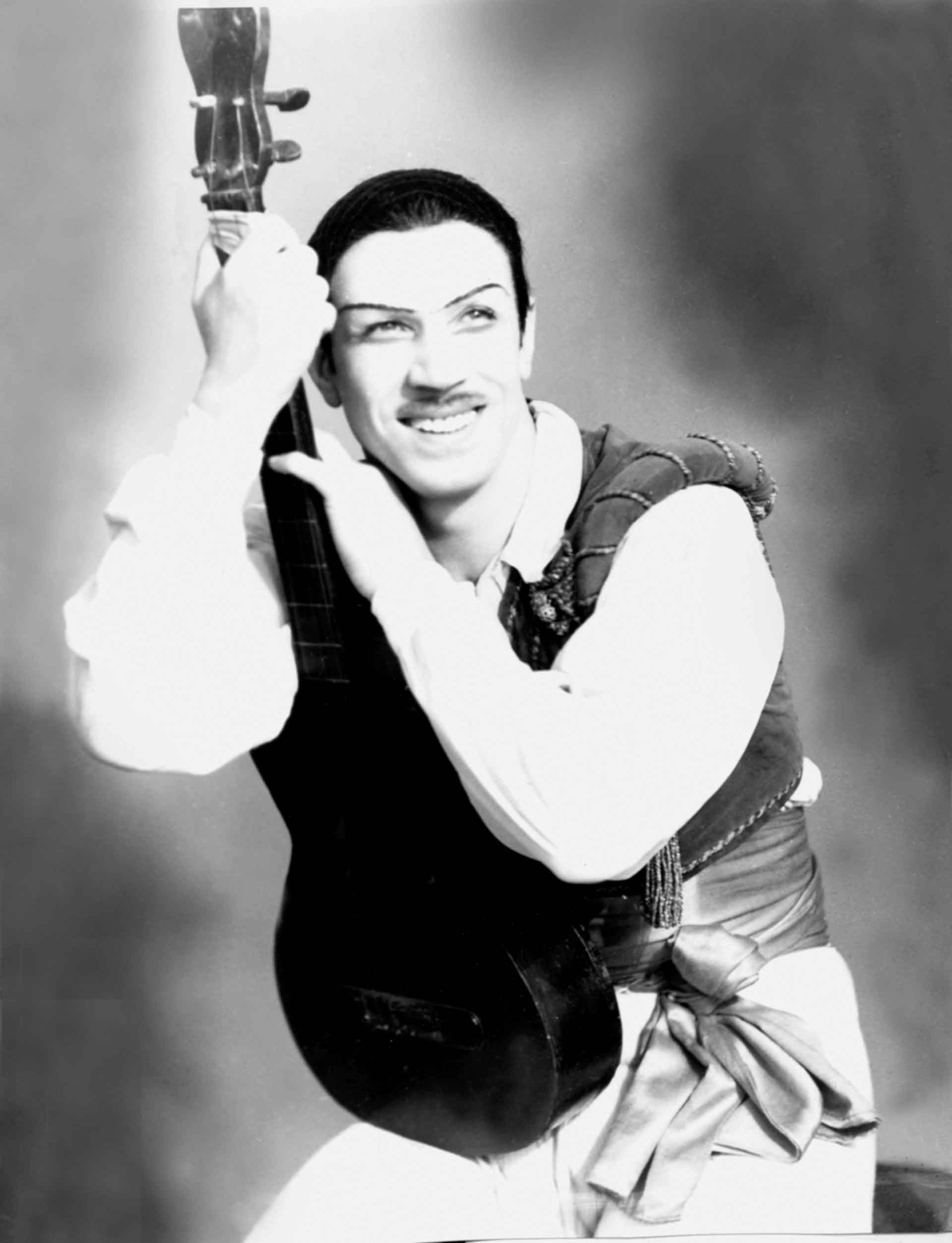