There are several theories concerning the origins of the Georgian alphabet; the most widely accepted among them attributes its provenance to the Greek alphabet. Georgian historic documents contain information about the time it was created and the person who created it.  “The Life of Kings” provides the following evidence: „This Parnavaz was the first king of Kartli, one of the relatives of Kartlos. He gave popularity to the Georgian language and no other language was spoken in Kartli but Georgian. He also created Georgian writing.” The statement presents a logical sequence of events: Parnavaz established the first Georgian principality, legitimized its state language and, consequently, created its writing system, the means for conducting state business. However, no written records of the third and following several centuries have survived, and therefore, this claim is not supported as indisputable fact.

From this perspective the bilingual stone with Greek and Aramaic texts discovered by Giorgi Tsereteli in East Georgia, near the city of Mtskheta, is of particular interest. The Aramaic letters differ to some extent from the ancient Semitic alphabet; some of its features resembled the Pahlavi (one of the Middle Iranian languages) writings, and some seem closer to the Parthian language (also known as Arsacid Pahlavi.) In order to establish the origin of this alphabet the scholar looked at ancient Aramaic and even Phoenician, but finding it different from both, named it the Armazi writing system. According to Giorgi Tsereteli, the shape of some Armazi signs resembles Georgian letters. He therefore assumed that the Armazi and Georgian writing systems had a common origin in Phoenician and ancient Aramaic, as had been suggested by Ivane Javakhishvili. 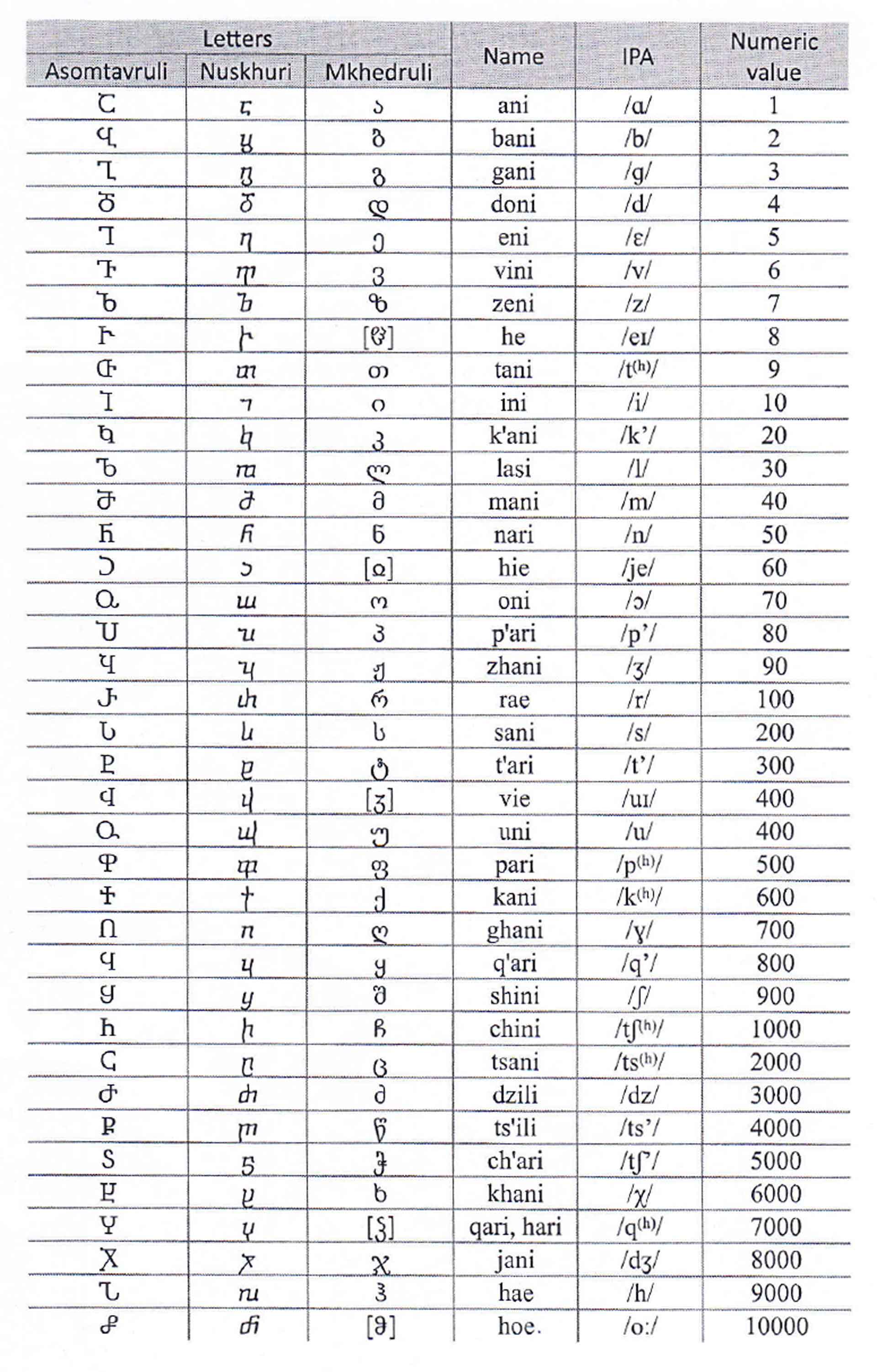 The Georgian alphabet and pronunciation of sounds

Ramaz Pataridze considered the information provided by Leonti Mroveli reliable. Parnavaz gave the impetus to the development of a Georgian writing system, but that did not necessarily mean that the alphabet was created during his rule. In Pataridze’s opinion, it was possible that Parnavaz popularized some writing system that was in existence before his time. The scholar does not believe that the Georgian alphabet belongs to the western group of writing systems based on the Greek alphabet, since the ideographic and calendar symbolism which is the property of Georgian letters is absent in Greek. According to Parnavaz, the Georgian alphabet, like Aramaic and Greek, derives directly from Phoenician. The ideographic and calendar denotation of letter signs typical for Semitic writing system support this theory. 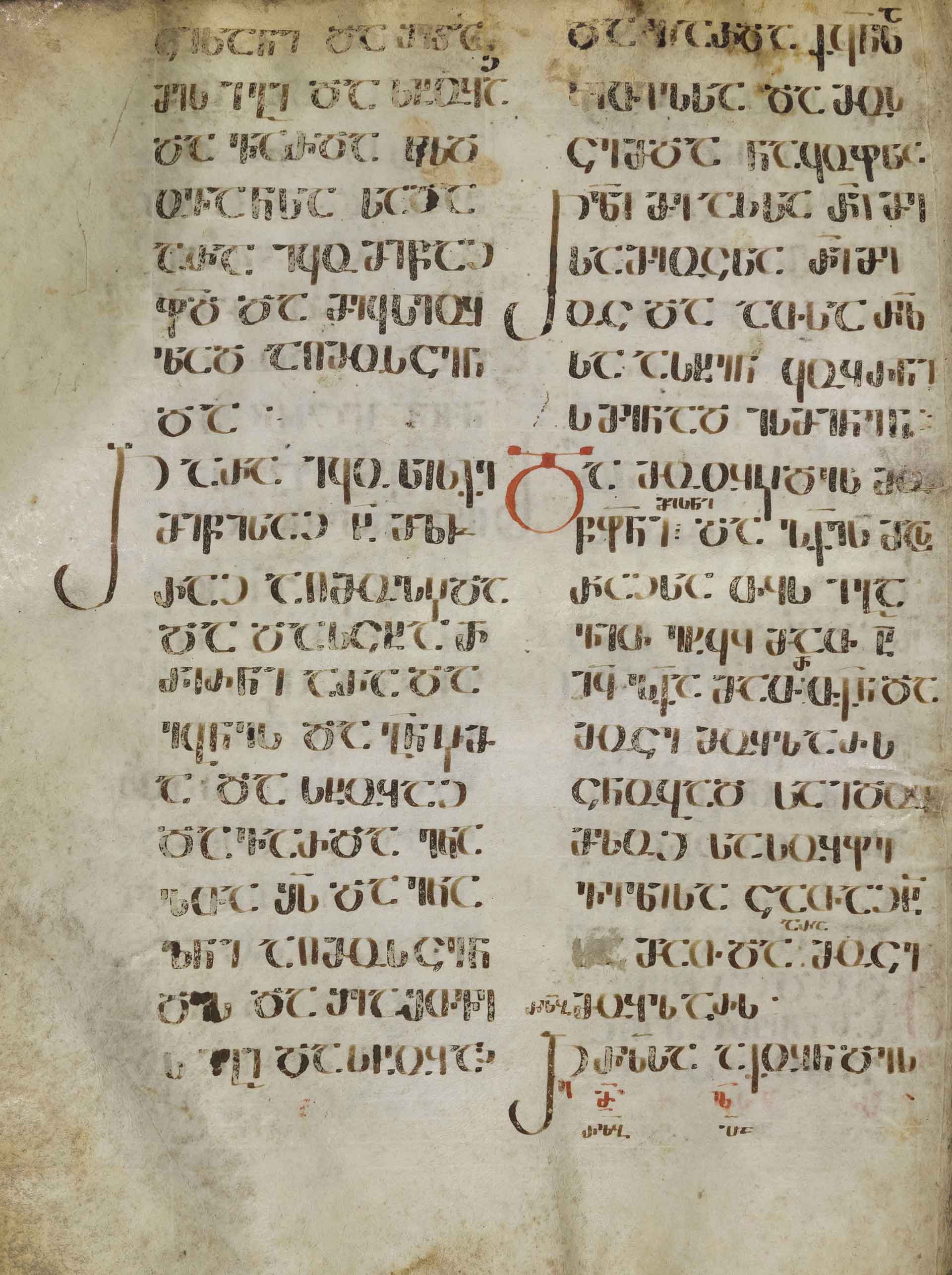 The best developed and generally accepted theory, however, is the one that posits the Greek origin of the Georgian alphabet. It is convincingly elucidated in the work of Tomas Gamkrelidze. The author analyzes the typology of linear alphabets, comparing each of them to the ancient Greek writing system. In addition to Georgian, a whole range of alphabets, such as Coptic, Gothic, Armenian and old Slavic have features similar to the Greek. In the Georgian alphabet, as in the Coptic and Gothic, the sequence of letters followed that of the Greek alphabet with certain phonetic “adjustments” until the point when the sounds, specific to the “recipient” language were introduced. As Ivane Javakhishvili pointed out, the Greek alphabet itself was created in the same manner; the letters designating specifically Greek sounds were added at the end of the Semitic alphabet, on its part adapted from the Phoenician.

The Georgian alphabet went through three stages of transformation: asomtavruli (mrgvlovani), nuskhuri and mkhedruli. These three types of letters represent a single, unified cycle of graphic development of the letter-signs during which the transitions from one type to another happened gradually. The alphabet used in contemporary Georgian is called mkhedruli. Each letter is written between two parallel lines and is round. Hence the name -  Mrgvlovani. The letters are written between four lines and are angular. Mkhedruli inherited a round configuration from Mrgvlovani and distribution of letters between four lines – from Nuskhuri. 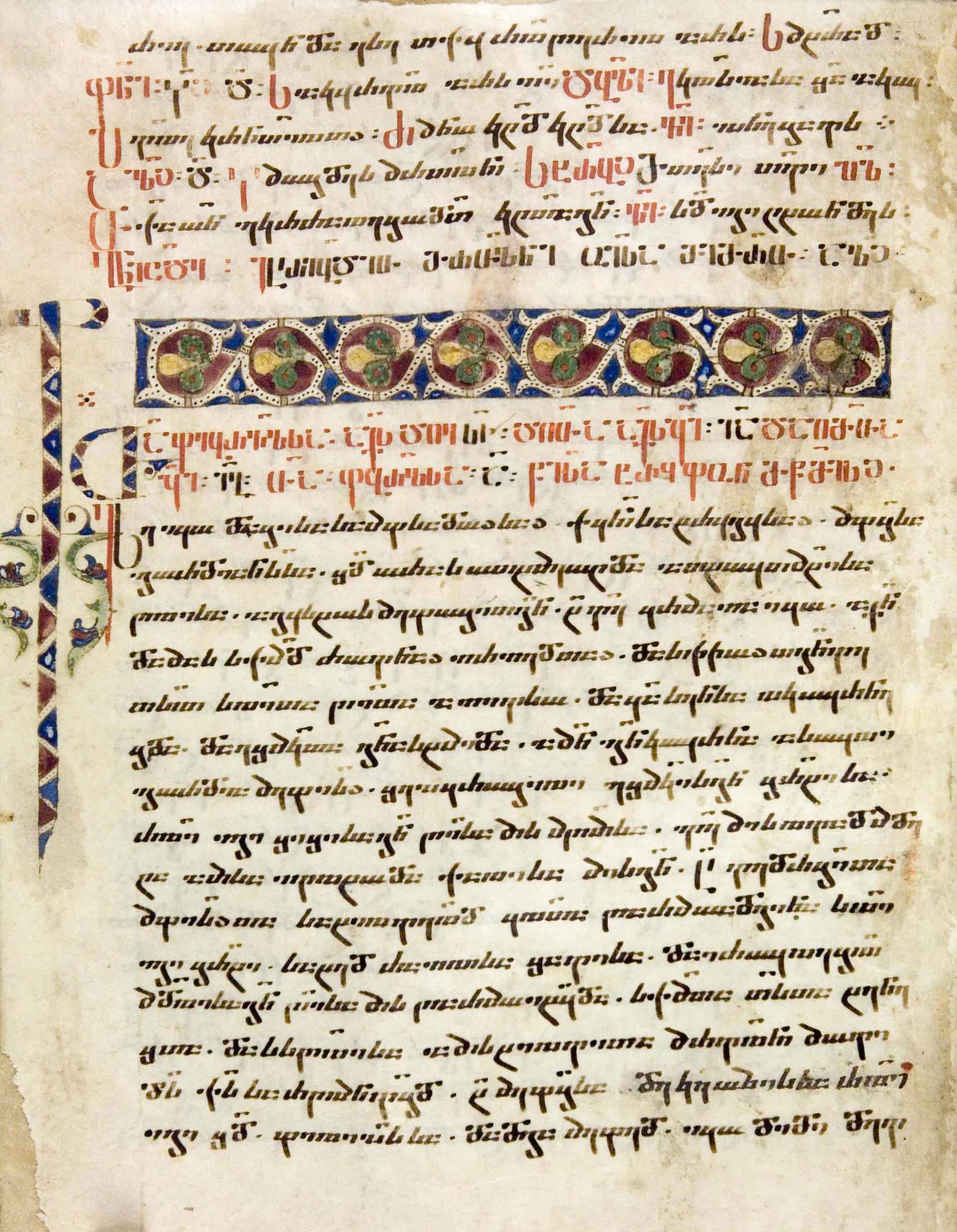 The German philologist Winfried Boeder and Georgian scholar Elene Machavariani analyzed the shape of letters of Asomtavruli in comparison with corresponding Greek graphemes. The letters of Georgian Asomtavruli consist of lines and circles that are joined in such a manner that the shape of any individual grapheme can fit a square.  No Georgian grapheme was designed as a certain ideogram except the letter ჯ. It was designed as two slanting crisscrossing lines and represented a monogram graphically uniting the initials of Jesus Christ, იესო ქრისტე in Georgian. It was a symbol of Crucifixion and the first letter of the word ჯუარი (cross) the shape and meaning of which it duplicated. About the same time as the letter ჯ came into existence the graphemes ჰაე  and ჰოე must have been created. These three additions must have happened simultaneously at the time when the Georgian alphabet was reformed in connection with the Christianization of the population living on the territory of Kartli. 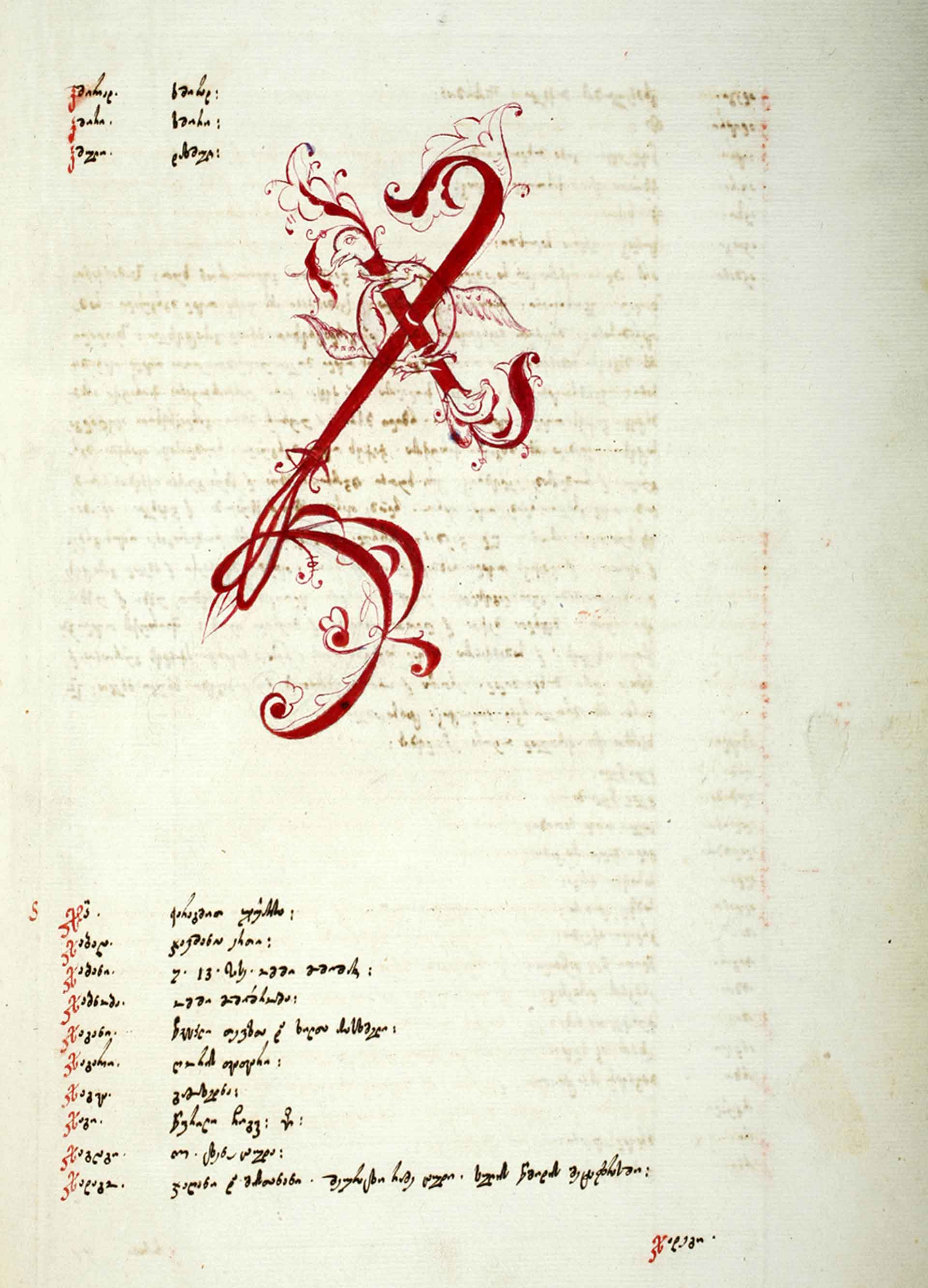 There is another theory that posits the Armenian origin of the Georgian alphabet, but it has been long rejected for a number of reasons. The creator of the Armenian alphabet used an entirely different principle for arranging the letter-signs. This discrepancy was noted by Friedrich Muller in spite of the fact that he himself considered Mesrop-Mashtots to be the creator of both alphabets. Muller pointed out that in the Georgian alphabet the specific sounds of Georgian were grouped at the end while in the Armenian alphabet they were distributed throughout. Because of such an arrangement it is impossible to differentiate the graphemes designating specifically Armenian sounds from the order of the letters corresponding to the Greek original. In addition, all the graphemes designating numeric values of the prototype alphabet (i.e. Old Greek) are left out. All the letter signs of specifically Greek sounds that are absent in Armenian are also ignored.

"Praise and Glorification of the Georgian Language", Sinai Multi-Chapter, 864, authorized or copied by Ioane Zosime

Thus, instead of the phonetic adjustments to the specifically Greek graphemes, the prototype alphabet was initially cut down so that the remaining letters could correspond to the sound symbols of the Armenian. It was this skeletal base upon which the ancient Armenian writing system was built. It should be mentioned as well that although Armenian historic documents name Mesrop-Mashtots as the creator of the Georgian (in addition to Armenian and Alban) alphabet, the same documents reveal that he did not know Georgian, thus repudiating the theory that he could have created its writing system. Creating a new alphabet does not amount to inventing graphic symbols; it requires thorough linguistic analysis of the target language and the ability to divide speech into separate sound elements that would be identified by corresponding graphic symbols. It is hardly feasible that a person not fluent in a given language could have come up with an alphabet adequately reflecting its sound system. Ivane Javakhishvili conducted a critical analysis of Coriun’s theory that Mesrop-Mashtots had created three alphabets, Armenian, Georgian and Alban languages and concluded that it must have been a later addition to his text. Javakhishvili referred to the Armenian historian Lazar Parpets’s rebuttal of Coriun’s work, identifying Mashtots as the author of only the Armenian alphabet. Thus, one of the main flaws of the Armenian theory is rooted in the very historic documents upon which it is based.