Betania: Wall Paintings of the Church of the Nativity of the Virgin

Betania monastery is located in the valley of the River Vera, not far from Tbilisi. The monastery was founded in the 11th century by the powerful Orbeliani family, and became a shrine for its members. Initially it was a large basilica, built of brick, but in the 12th century the building was reconstructed as a domed church of  the cross-inscribed type that  incorporated  parts of the old building, which is attested by the horse-shoe shape of the apse and of the west arches. The exterior walls were covered with new facings of well-cut ashlar. 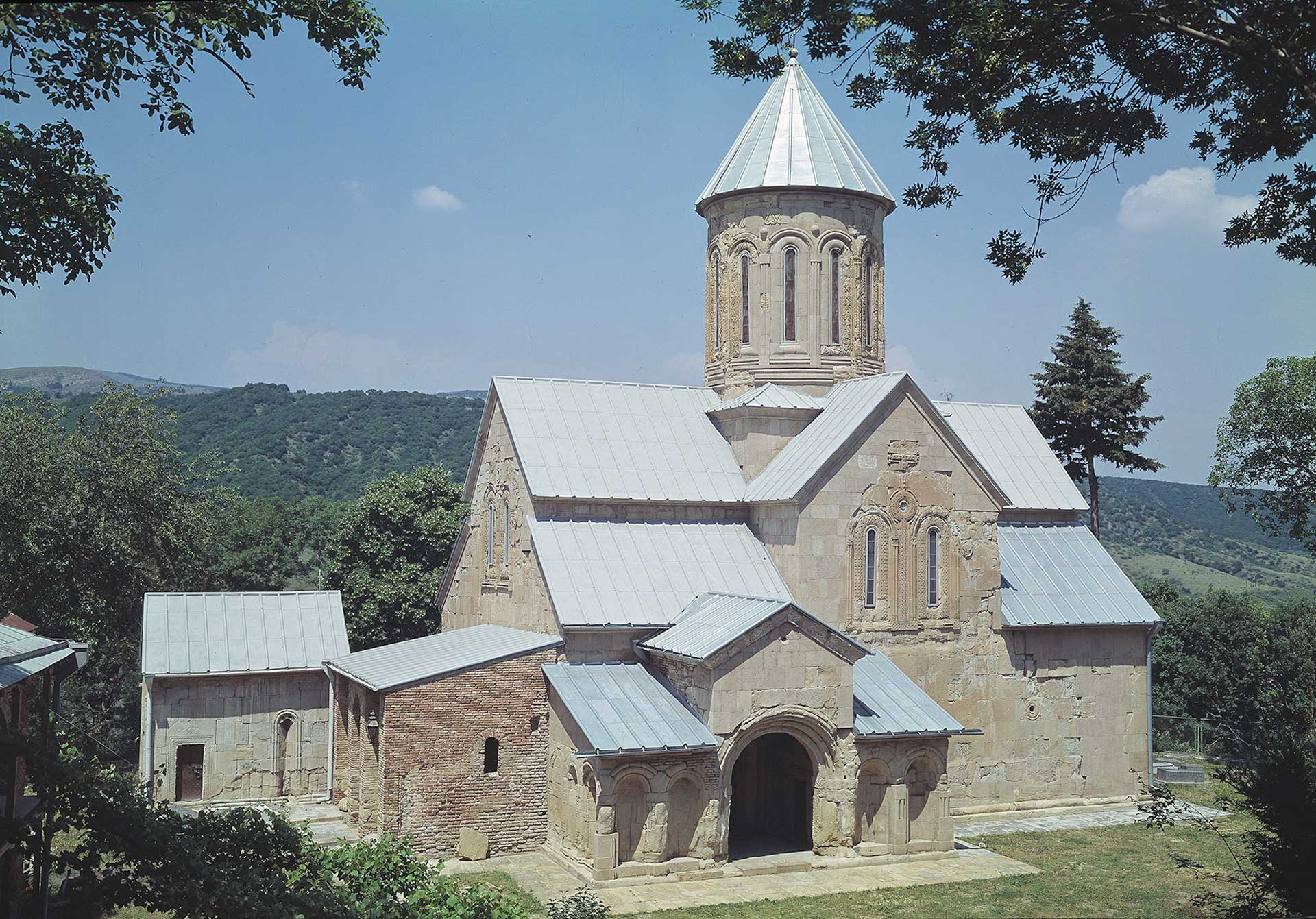 At present Betania monastery comprises the main Church of the Nativity of the Virgin, a small one-naved church to its west, remnants of the circuit-walls and the gate, with what is presumably a belfry on the second floor.

Similar to the architecture of the church, the wall paintings also display several chronological layers. The murals in the dome, on the vaults and in the sanctuary conch have totally vanished. the majority of the  images are preserved in the apse and on the walls of the church.

Along with their high artistic value and comprehensive theological content, the murals of Betania church reflect the political realities in the Georgian state of the time, namely the confrontation between the powerful Orbeliani feudal family and the rulers King Giorgi III (1156-1184) and Queen Tamar (1184-1213), as such they possess great historic significance, since they represent these events through changes made to the murals. 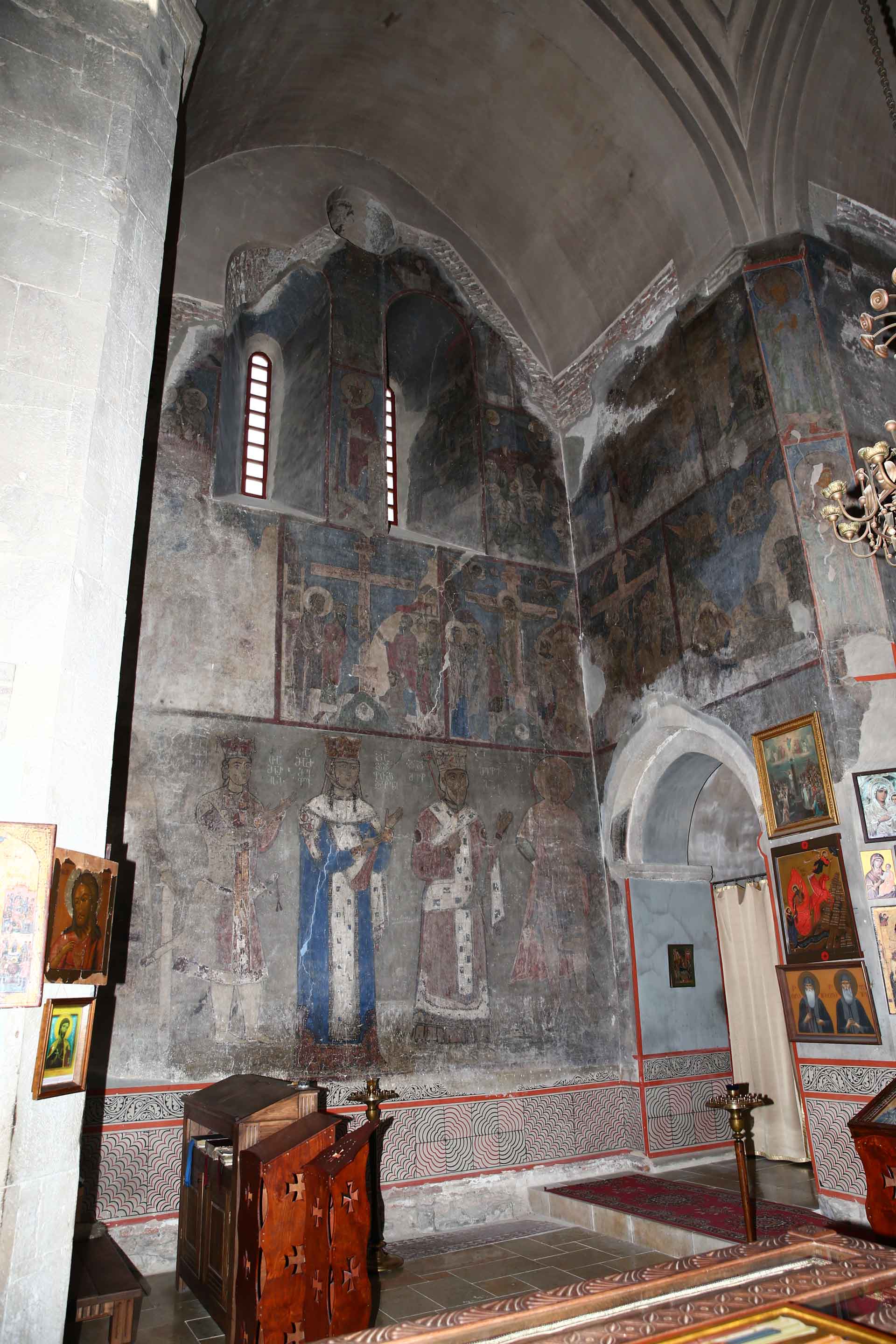 Interior of the church, view to the north-east. Photo by Z. Tsertsvadze

The program of the apse seems to follow the 11th c scheme: with the Deesis in the conch, and successive rows of the Prophets, the Apostles, the Holy Bishops, and the deacons.  These rows continue on the presbytery walls and the sanctuary pilasters. Some of the figures, (e.g. the Prophet Jonah, the Prophet Solomon) are clearly works of the 11th c. The rest of the sanctuary murals were repainted in the 12th c. 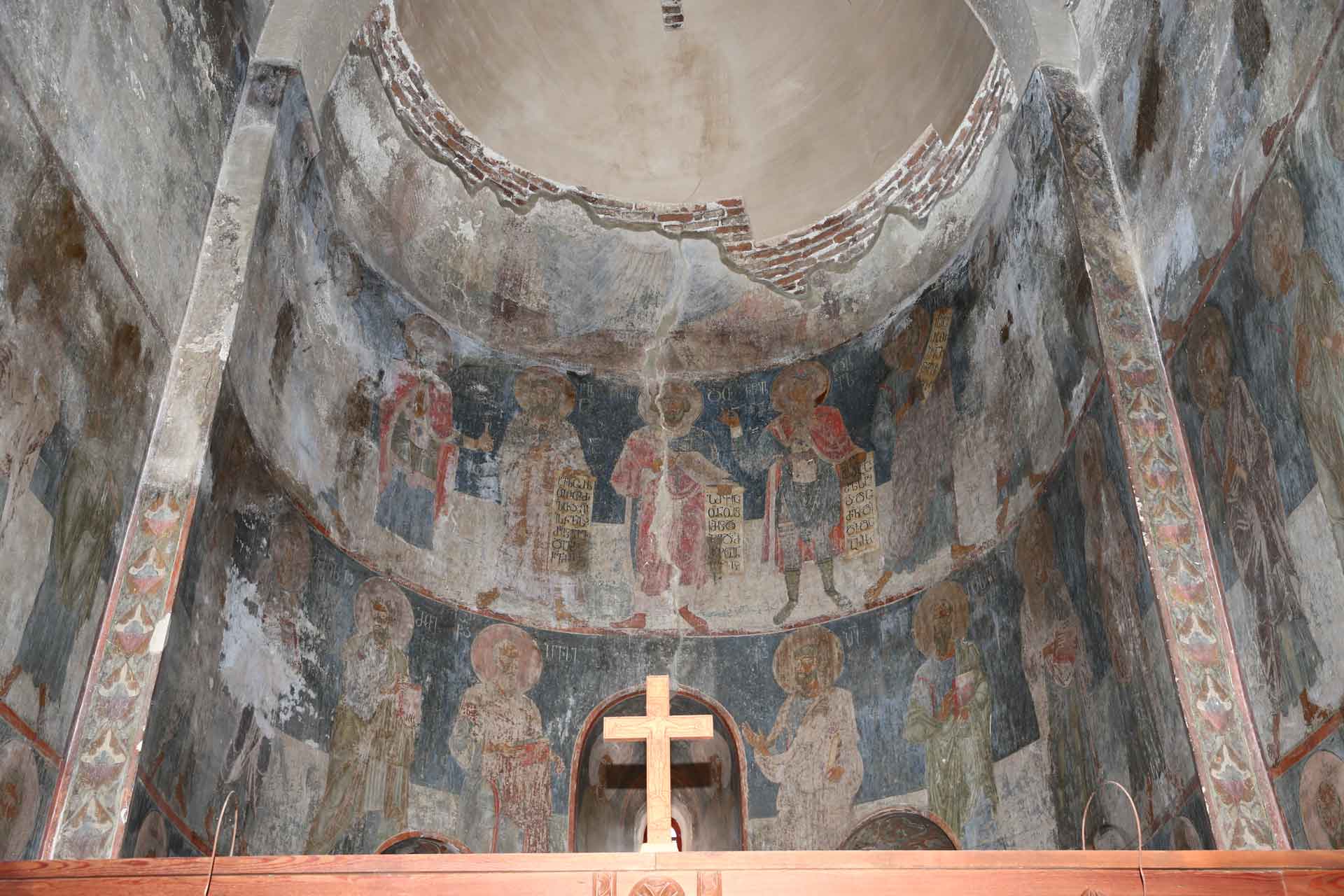 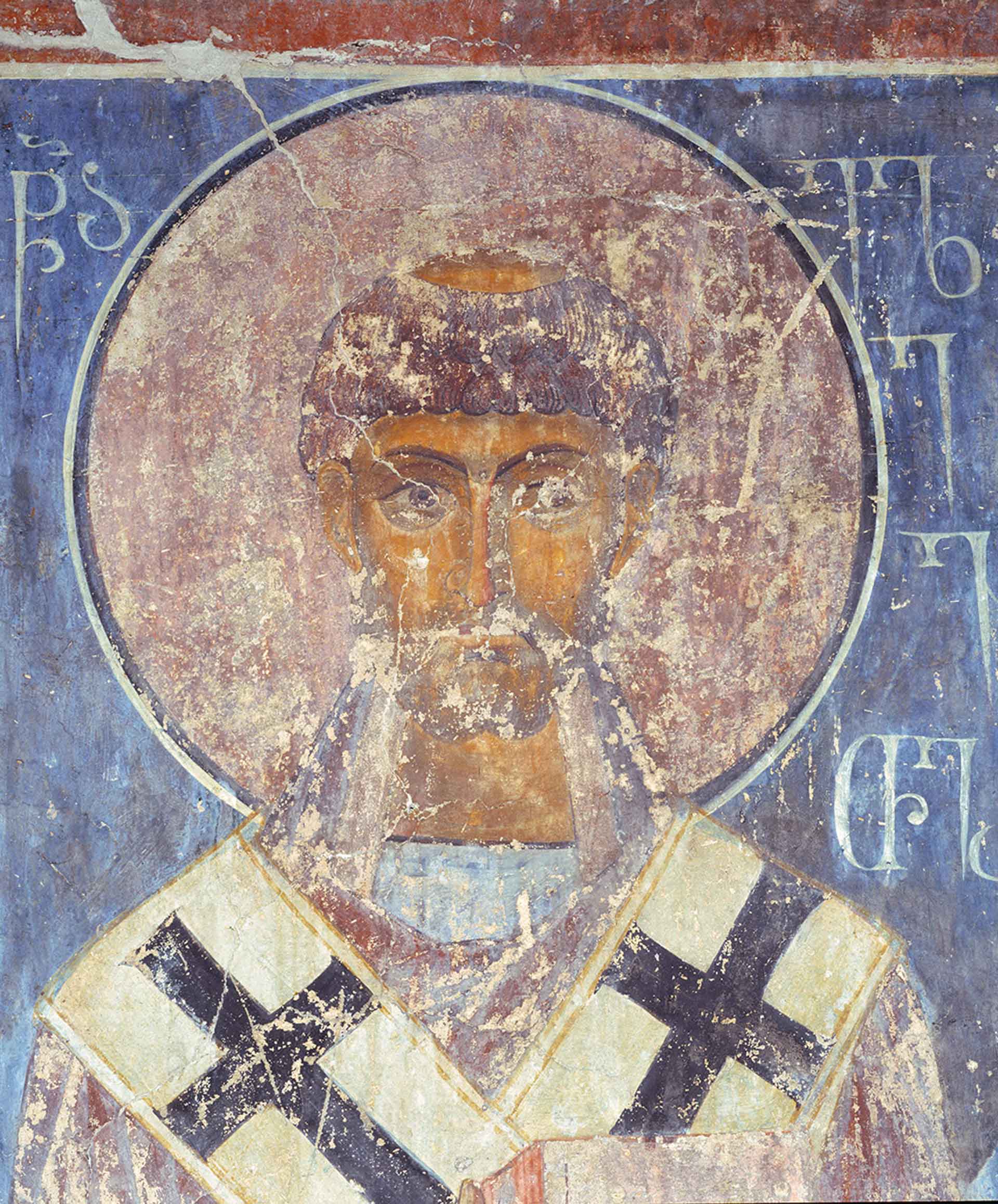 The murals of the north and south cross arms date from the mid 12th c.  In the upper tiers of these walls, the Cycle of the Great Feasts is presented (only certain scenes are preserved: the Annunciation,   the Myrophores at the Tomb, the Ascension, the Descent of the Holy Spirit etc)  as well as a rather elaborated Passion cycle on the north wall.

The south wall features one of the earliest and most unique cycles of the biblical prefigurations of the Mother of God.  Large figures of the Prophets with attributes related to the Virgin are depicted on the walls and in the jambs of the windows (David dancing in front of the Arc of the Covenant, Ezekiel and the Closed Gates, Moses in front of the Burning Bush, Aaron with the Flowering Staff, Jacob with the Ladder, Daniel in front of the Rock, Gideon with the Fleece etc.). 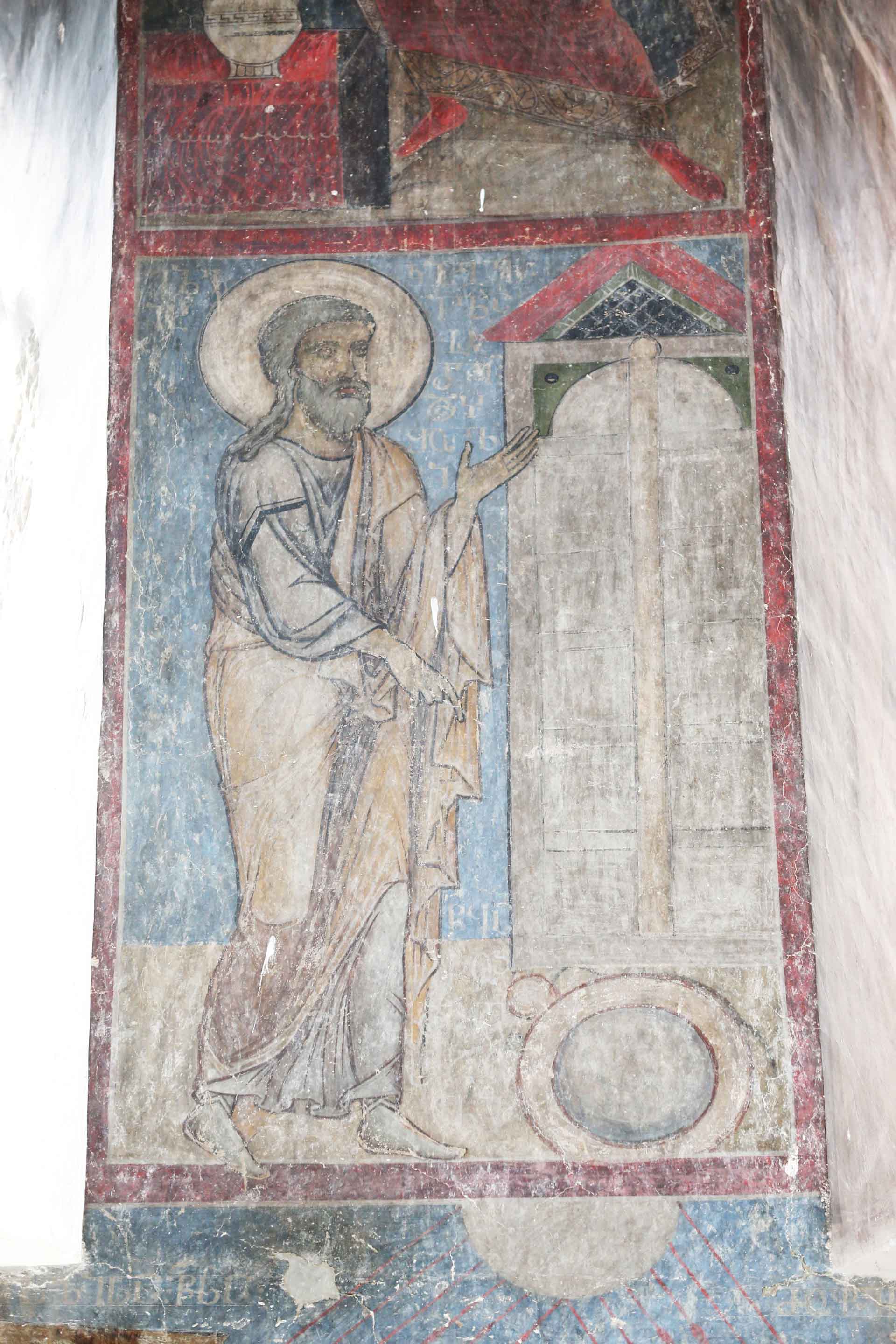 One more image of Mary's prefiguration, namely the Three Babylon Youths in the Furnace – is depicted on the opposite south wall. This part of the church is dedicated to an elaborated Passion Cycle: (Judas receiving the 30 silver coins from the priests; the Last Supper, the Washing of the Feet,   the Agony in the Garden, the Betrayal of Judas,  the Denial of Peter, Christ judged by Pilate, the Repentance of Judas,  the Carrying of the Cross, the Crucifixion, the Deposition, the Lamentation, the Resurrection etc.) 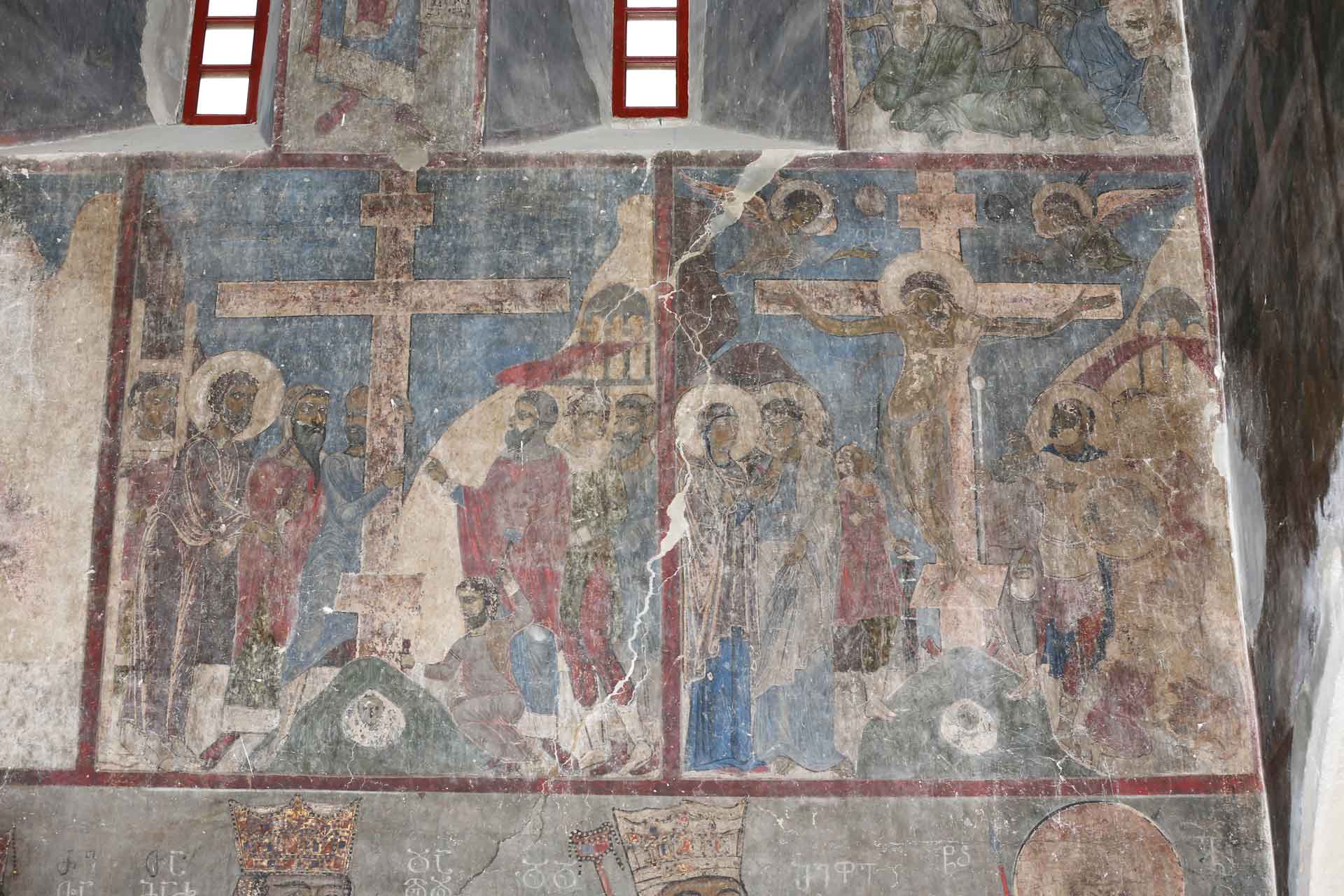 In the western bays there are rather rare images of the Communion of St. Mary of Egypt and the Dance of Salome.  On the lower parts of the pilasters and columns there are figures of Saints, Holy Monks, Holy Warriors, etc. 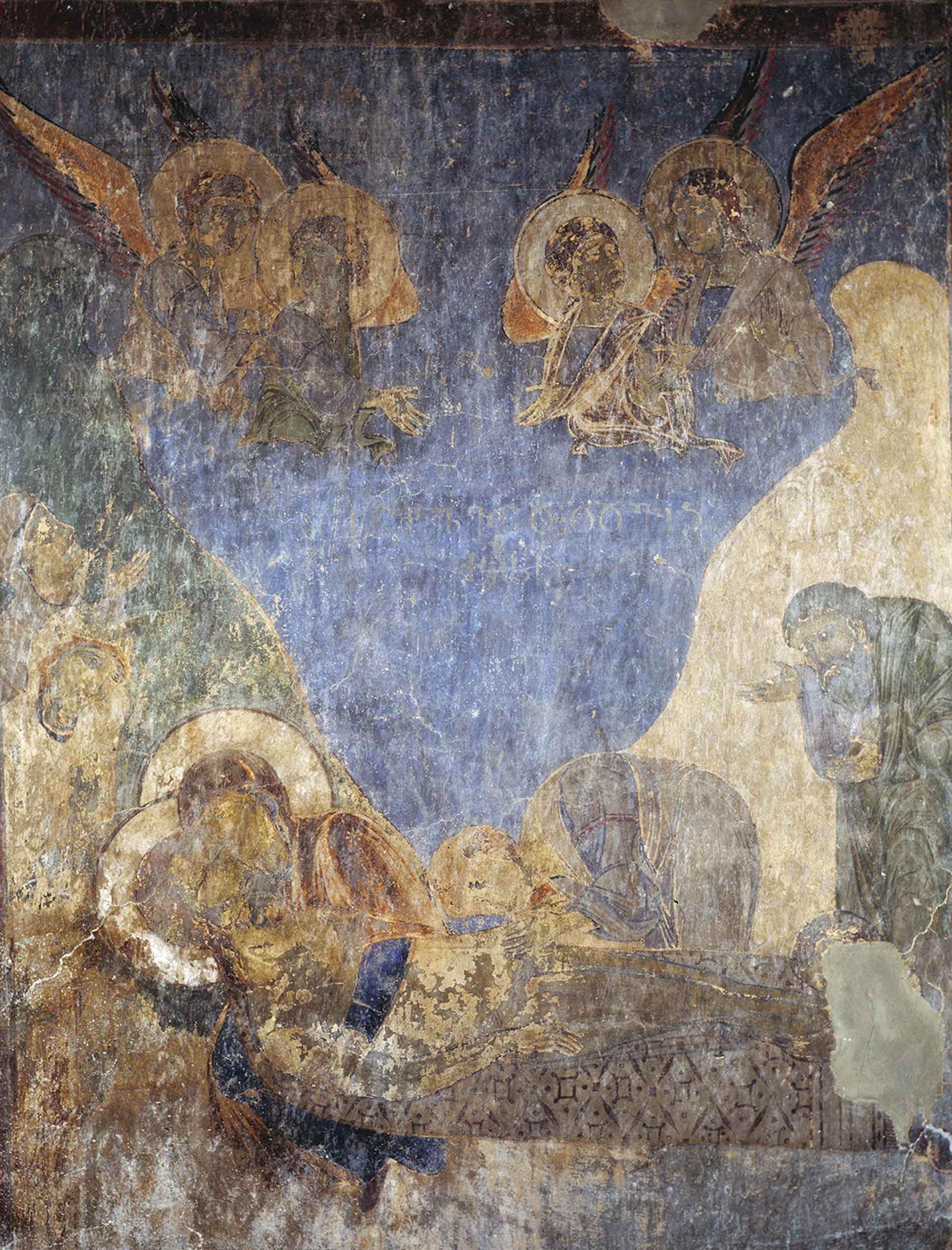 In the lower tier of the south wall, next to the sanctuary there is a donor's portrait, which according to inscriptions represents Sumbat the Great of the Orbeliani family, prime minister and minister of war (1128-1156) under King Demetre I (1125-1156). He is portrayed offering a model of the church to the icon of the Virgin and Child. The second figure is presumably his son.  All the inscriptions are executed in the ancient Georgian script, Asomtavruli. 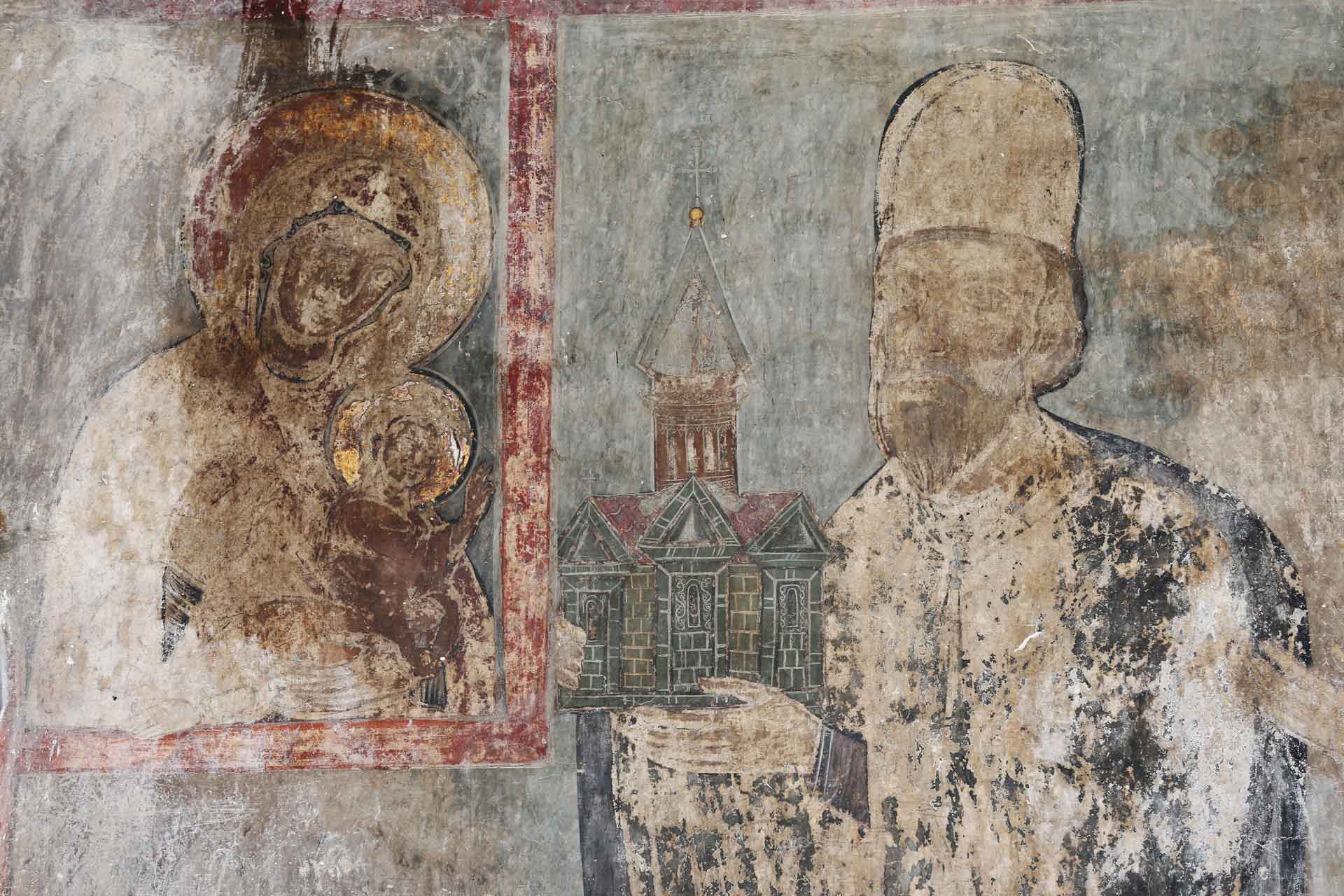 Donator portrait: Sumbat the Great,  interceding with the icon of the Virgin,  south wall, 12th c. Photo by Z. Tsertsvadze

Of particular historical importance is the large  dynastic portrait of the Bagrationi royal family, namely King Giorgi III  (1156-1184), Queen Tamar (1184-1213), named in the Georgian inscription as "the King of Kings", and her son Prince Giorgi Lasha (1213-1223). They are presented turning to the East, in poses of supplication, flanked by two frontal figures of the Holy Warriors. This portrait was executed at the beginning of the 13th c, after the revolt of the Orbeliani family against Queen Tamar failed and the former were deprived of their estates and positions. The royal portrait is much larger than that of Sumbat Orbeliani and located  on the north wall, right opposite the main entrance, thus attracting the attention of people entering the church it seems that in so doing,  the Bagrationi family wanted to highlight their victory over their rivals. This panel bears signs of many repaintings and retouchings, even in the 19th c. (which is attested by the types of pigment used). 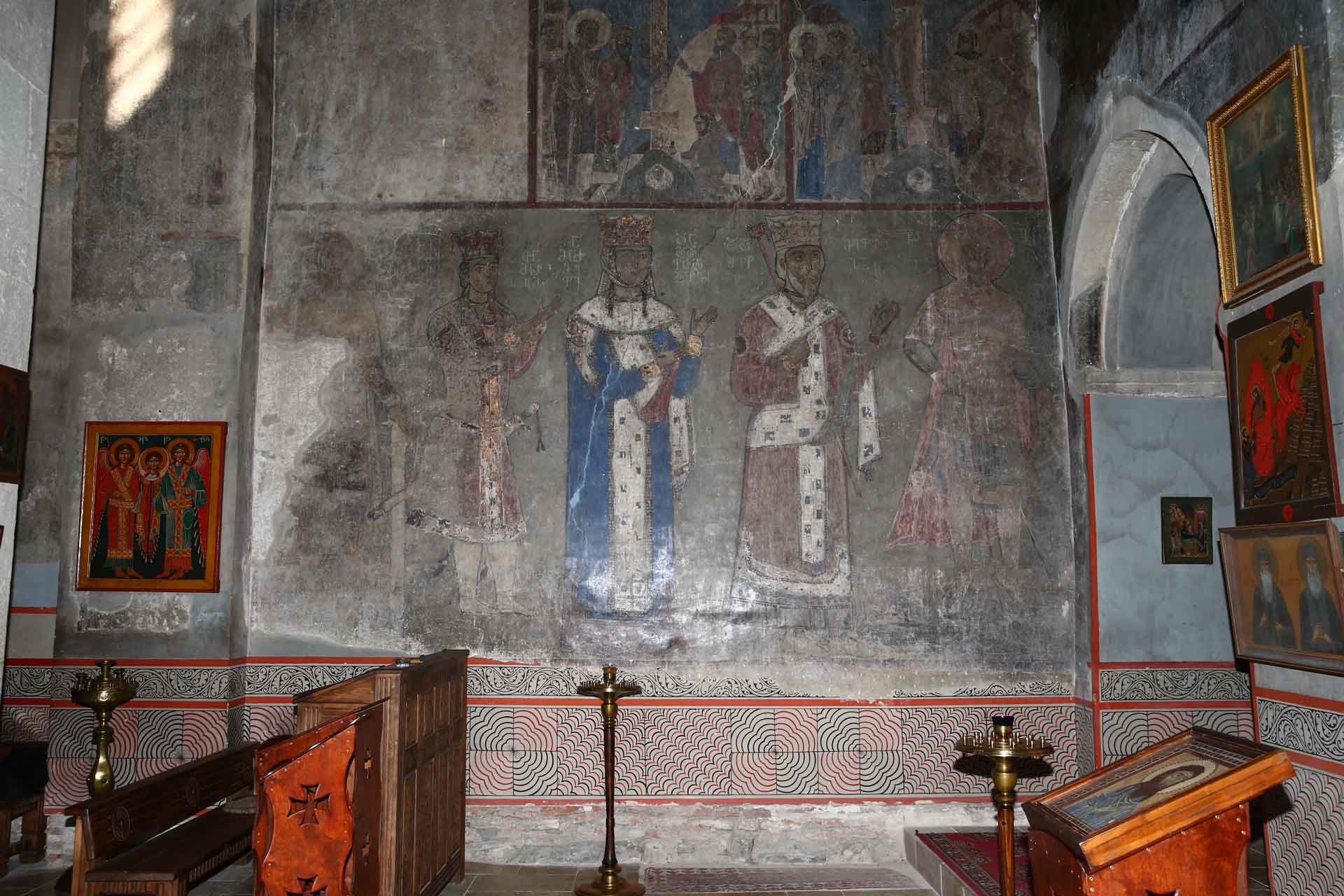 The royal panel was executed almost certainly around 1207 when Lasha Giorgi was crowned as co-ruler with Queen Tamar, as attested by the royal insignia – crown and sword.  In the same period, namely in the early 13th c, the painting of the west wall was executed, which features a  large composition of the Last Judgment, with a rare and original layout. 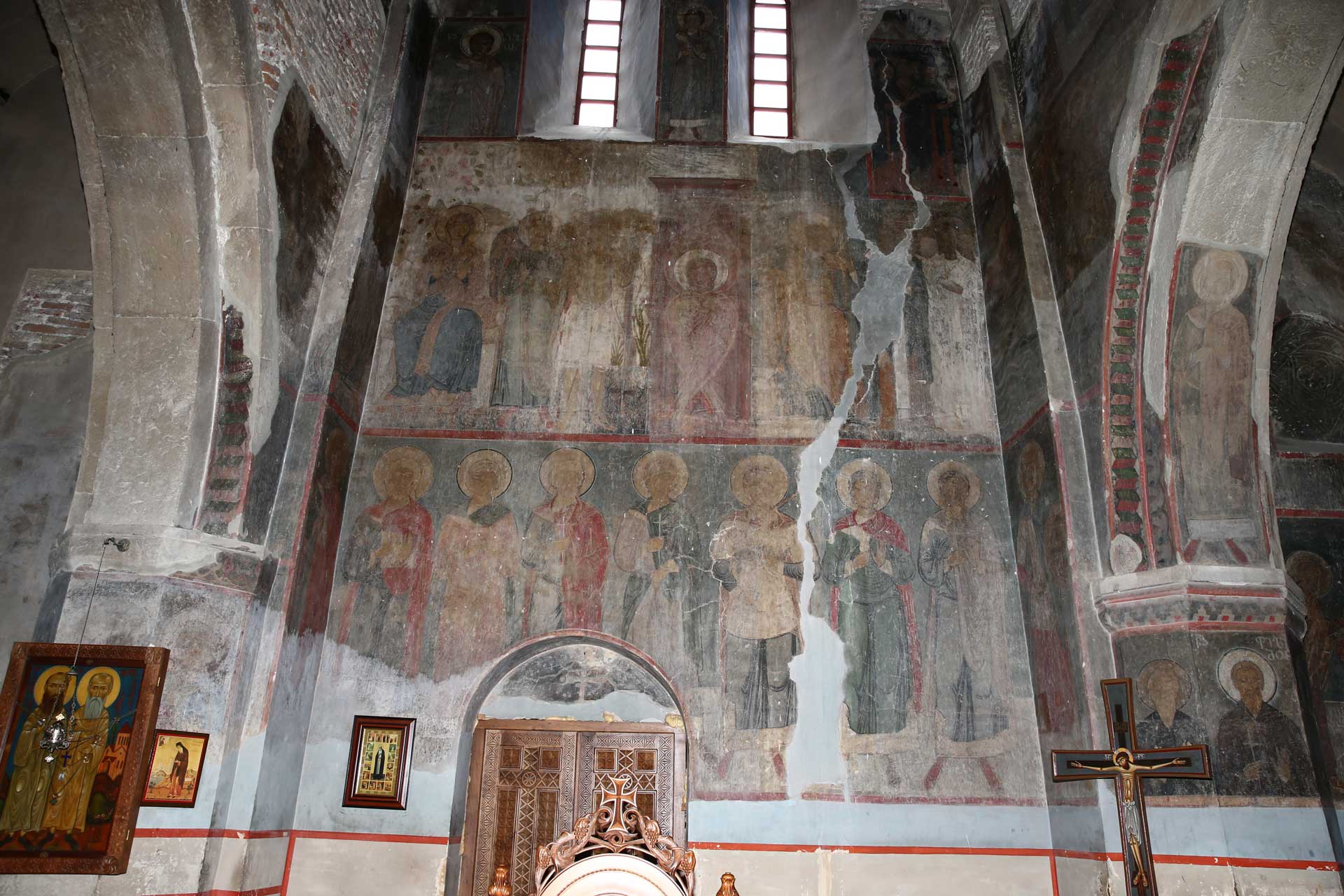 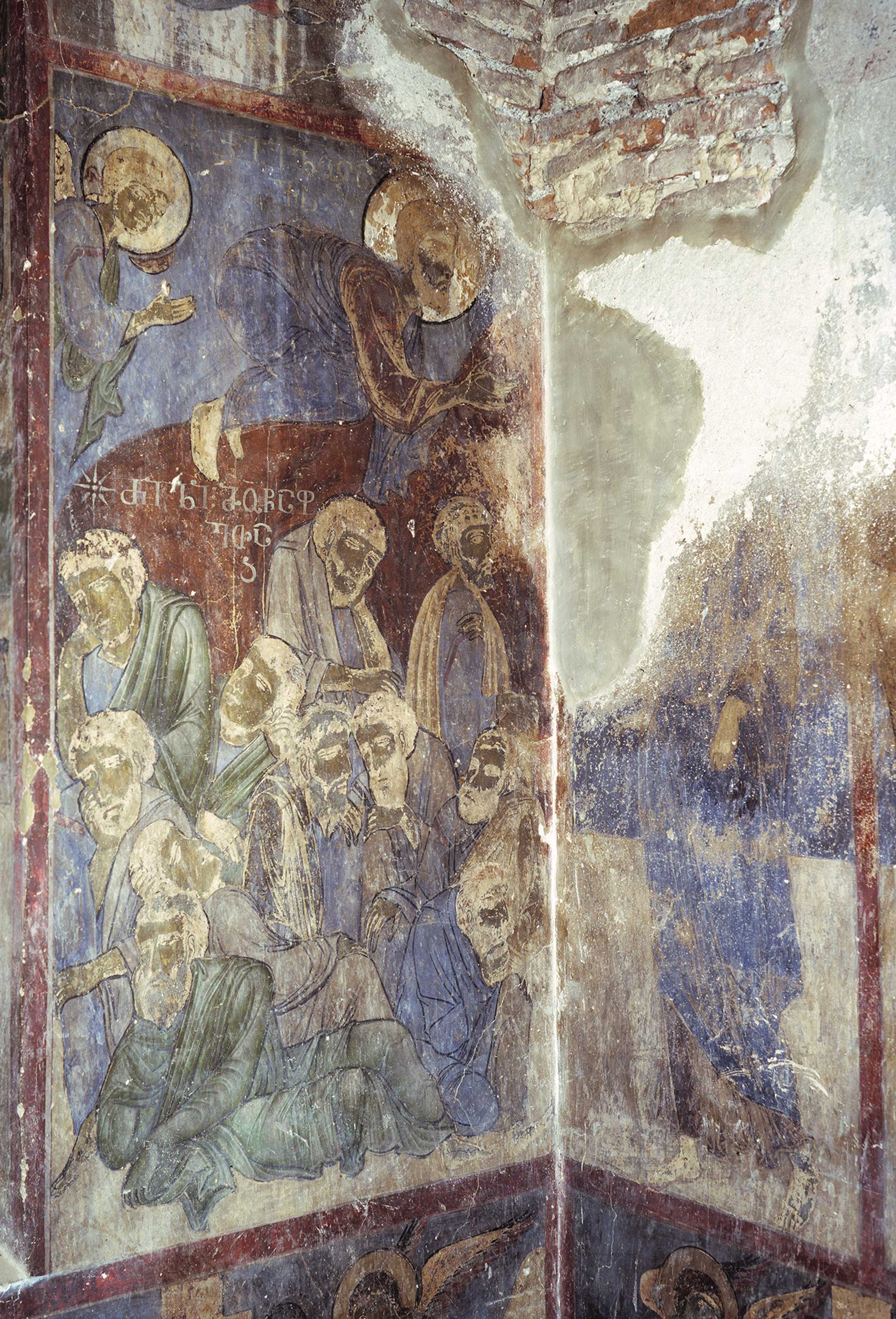 In the niche in the lower part of the apse there is an inscription that can hardly be made out in the floral ornaments, bearing the name Demetre – presumably the painter of the sanctuary. In the jamb of the large window on the south wall, at the feet of the Prophet Aaron, there is a tiny kneeling figure that bears a strange inscription: "Lord, do not have mercy on Sophrom," which is also presumably a painter’s inscription, with a strong sense of self-humiliation. 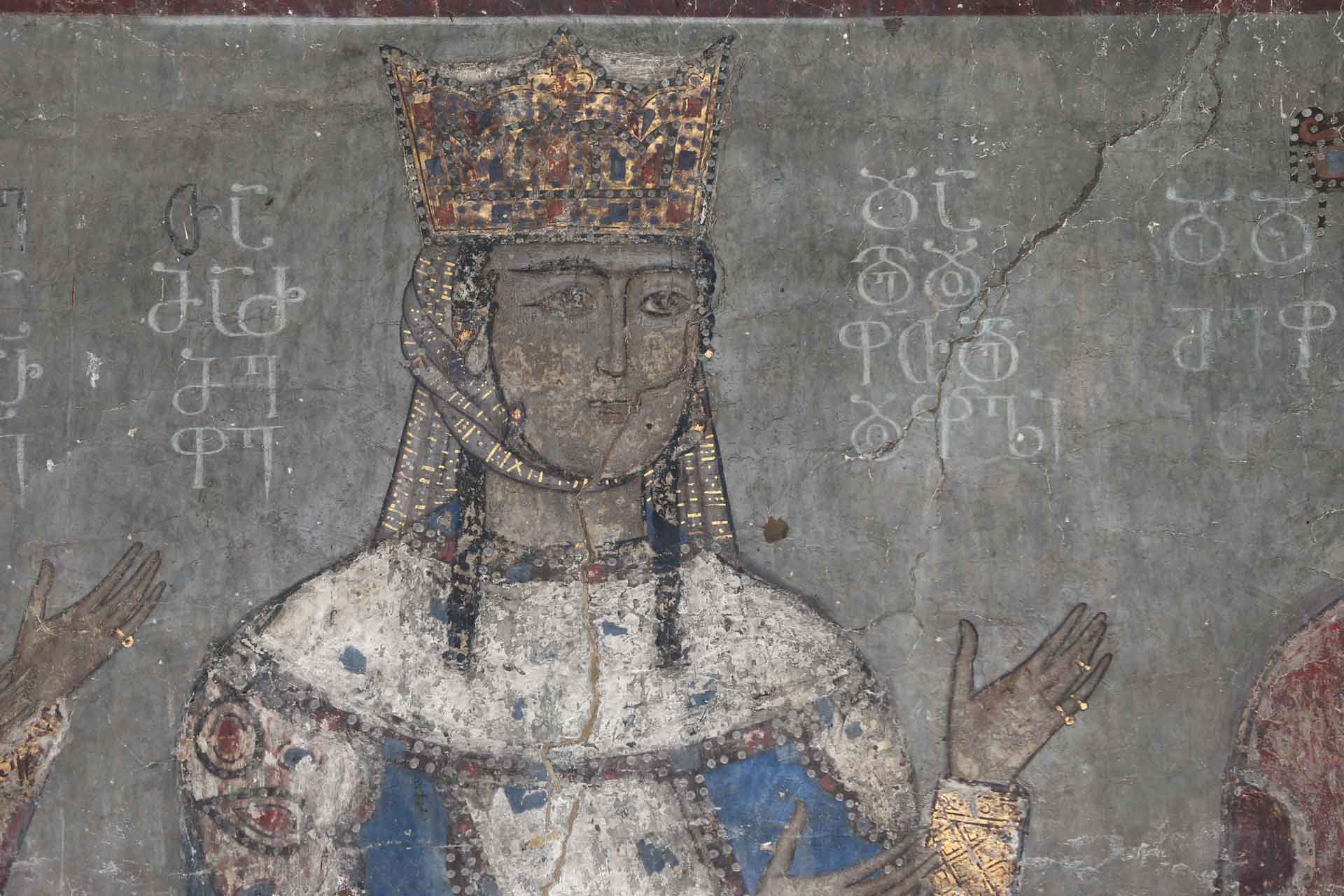 Every layer of the murals of Betania church reflect the prevailing tendencies of the period in question, while at the same time they are distinguished by their high artistic standard and  uniquely  original interpretation  of Christian themes. The wall paintings of Betania church are a masterpiece of the "Golden Age" of Queen Tamar.

Wall Paintings of the Holy Cross Monastery in Jerusalem