The Church of St. Nicholas stands on a small elevation in the village of Nikortsminda (Racha region). According to the inscription on the west façade, it was built in the latter years (1010-1014) of the reign of King Bagrat III (975–1014). The Church is preserved in almost original condition, though traces of the restoration that was carried out in the 16th century are evident on its façades. St. Nicholas Church is a central-domed structure (cross-shaped from the exterior) with five apses radially disposed around the dome, and a rectangular west cross-arm with lateral compartments. The south and west porches were added a little later, yet they are integral to the external appearance of the church. 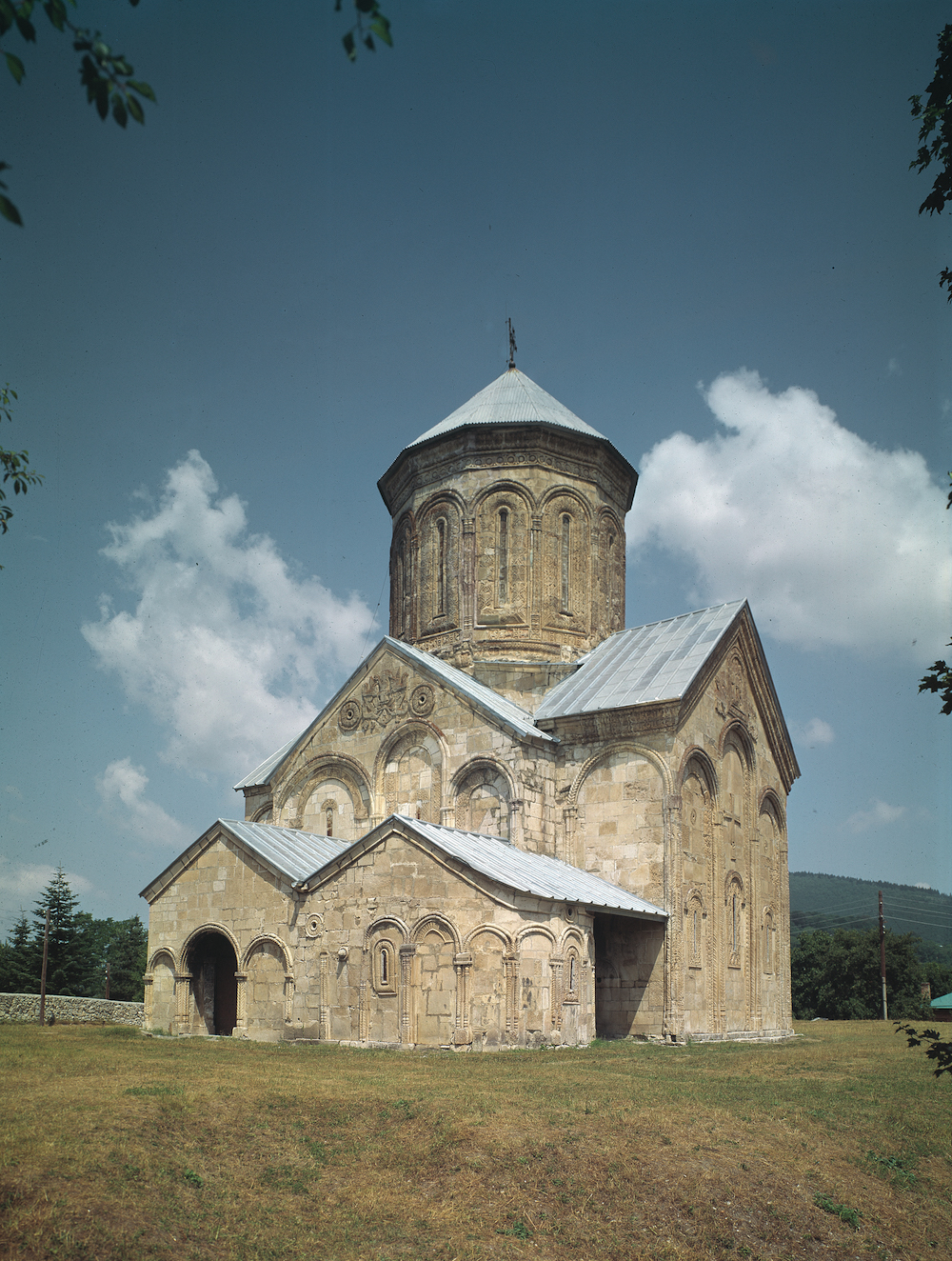 The church is faced with hewn stone, and is remarkably richly adorned. Decoration of the facades comprises blind arcading, carved ornamentations and figural reliefs. Sculptural compositions are concentrated in the upper zones, at the gables of the walls and in the tympanums of the entrances. The gables of the east and south façades feature the Transfiguration flanked by the mounted Holy Warriors and the Second Coming. A relief depicting Christ enthroned is placed at the top of the west wall. 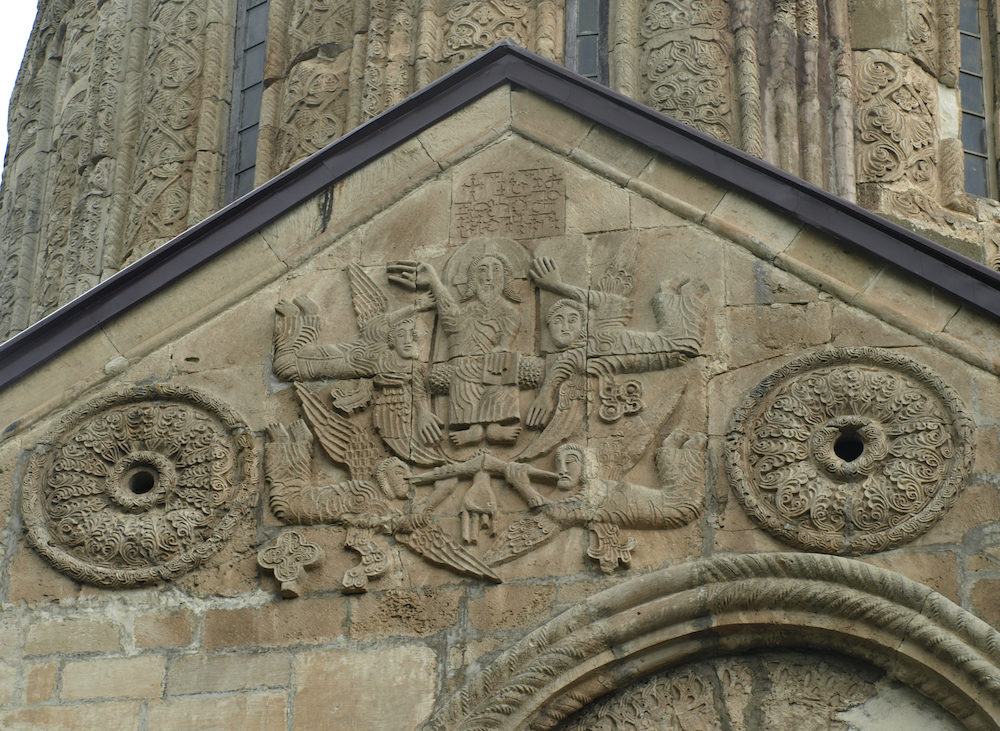 The tympanums of the entrances bear: the Ascension of the Cross, half-length figures of the Archangels, and Christ standing between mounted Holy Warriors. The latter, as well as the Holy Warriors on the eastern façade, are identified as St. George killing the emperor Diocletian and St. Theodore killing the dragon. 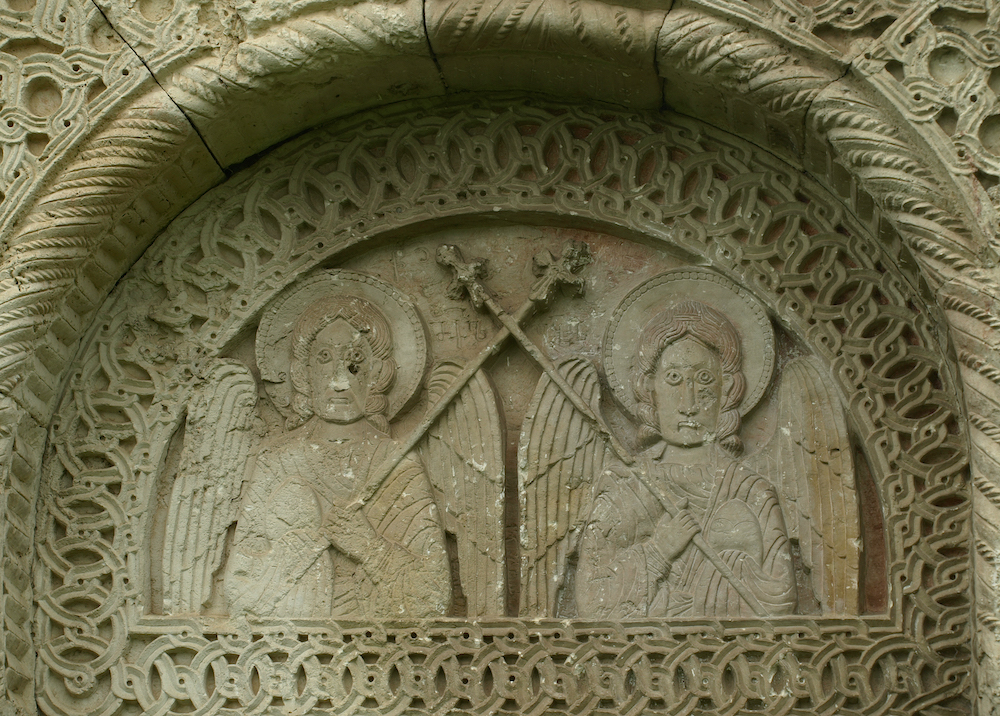 Nikortsminda. St. Nicholas Church. The Archangels in the tympanum of the northern entrance. Photo: N. Natsvlishvili

In addition to these compositions, the church is adorned with a wide range of interlaced ornamental reliefs as well as real and fantastic animal figures. Sculptural decoration also appears in the interior of the south porch. 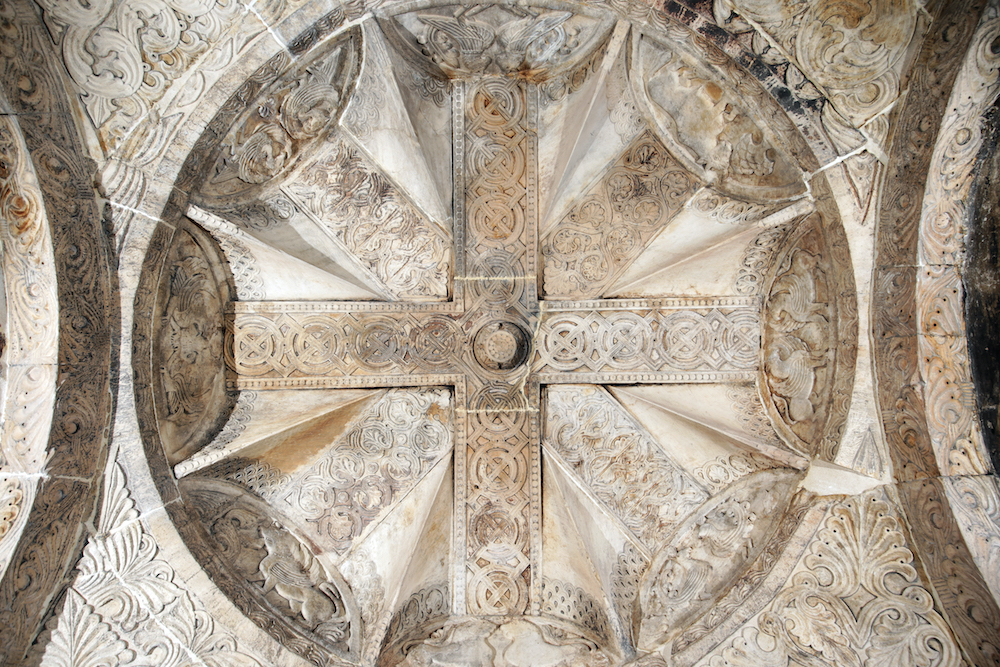 Nikortsminda Church is primarily remarkable for its architectural structure and sculptural decoration, which mark the peak in the evolution of medieval Georgian plastic art (the eleventh century), but the Church also preserves very important wall paintings. The murals that completely cover the interior of the Church are chronologically very distant from the original structure of the Church, and date from the 17th century. Certain sections were renovated more recently, in the 18th and 19th centuries. The overall program of the murals in the main space of the Church is quite extended and elaborate. It consists of scenes from the Old and New Testaments and images of numerous individual saints, and clearly reflects the traditions of post-Byzantine art, yet there are also themes typical of medieval Georgian wall paintings, such as the Ascension of the Cross depicted in the dome, and the Deisis in the conch of the main apse. 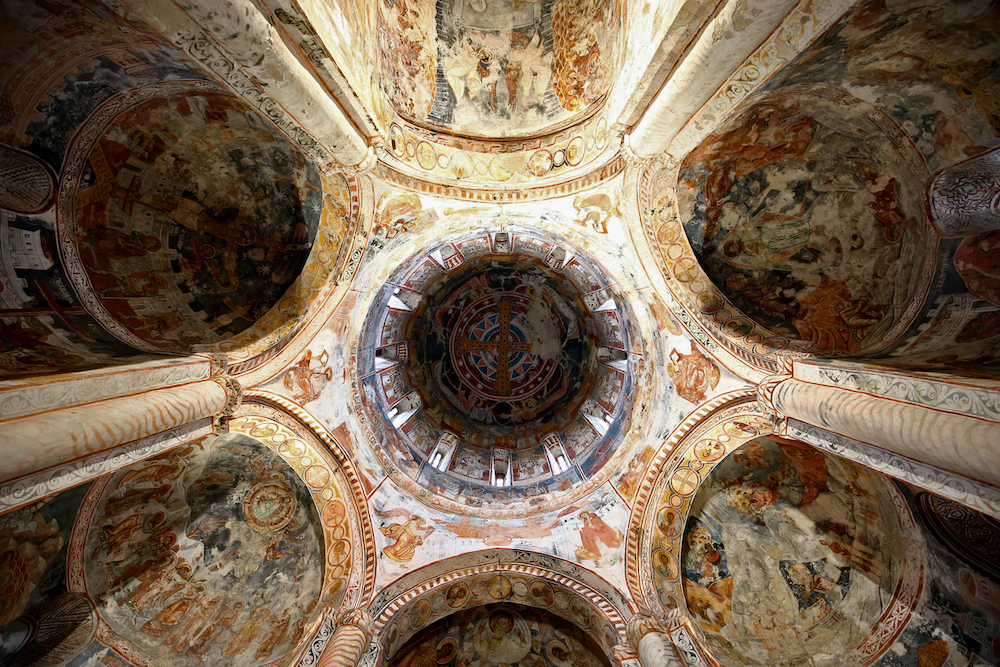 The drum of the dome features a representation of the Prophets and the Holy Bishops, Abraham’s Sacrifice, the Hospitality of Abraham, the Ascension of Elijah, Elijah fed by the Raven, the Nativity of the Virgin, the Dormition, and the Miracle at Cana. 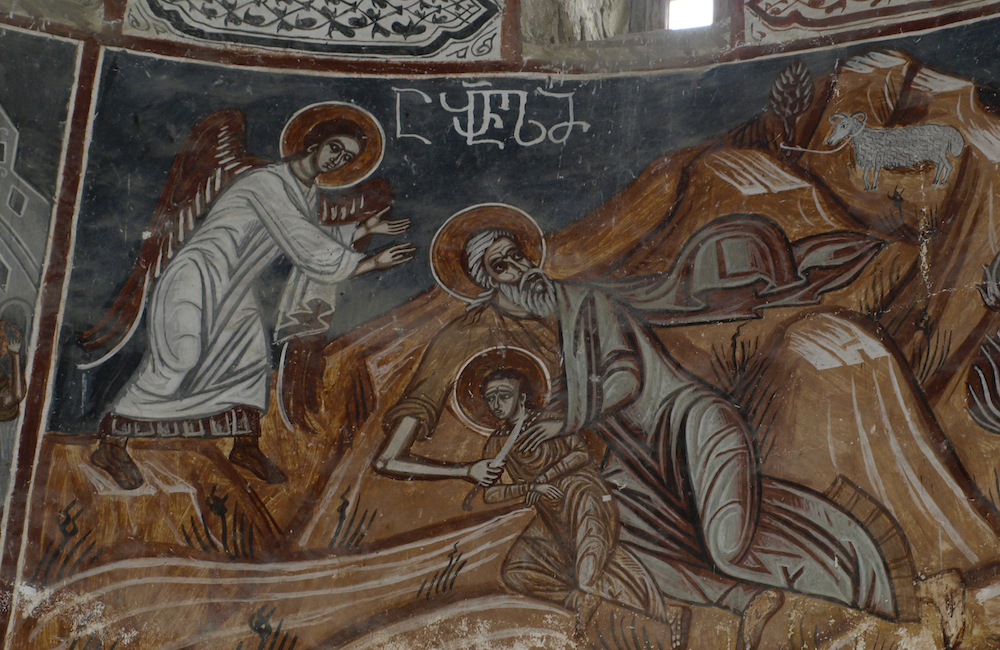 The four other apses of the Church are decorated with Christological scenes displayed in the upper zones, and isolated figures of saints and the donors’ portraits in the lower registers. A large composition of the Last Judgment takes up the western cross-arm. 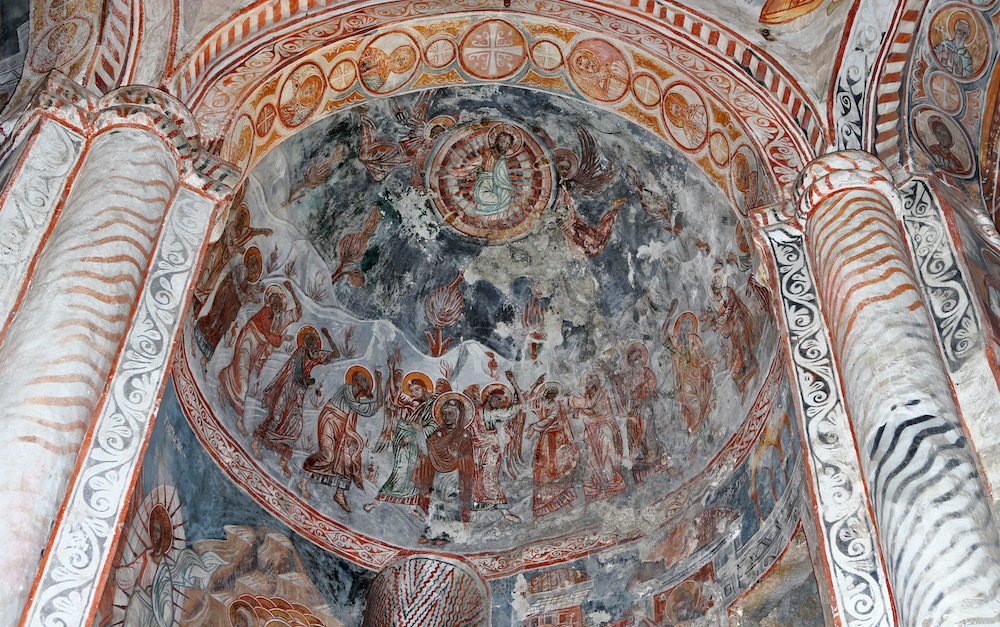 Stylistically, the murals at Nikortsminda Church are typical examples of post-Byzantine painting. Despite their homogenous character, the differences in figure rendering, facial types, and coloring indicate that a group of painters were responsible for these wall paintings. What distinguishes the murals is the great number of donor portraits occupying almost all the lower zones of the Church. They represent members of the local nobility – the Tsulukidze family, who are well known from historical documents. The principal donors holding a model of the church are depicted in the north-west apse. 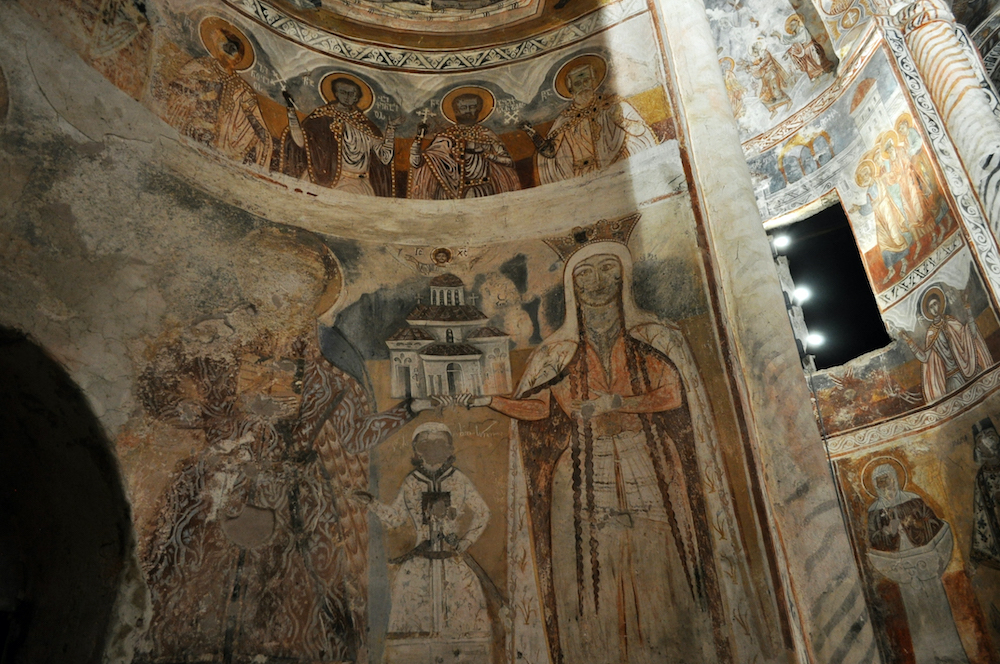 The west and south porches are also adorned with wall paintings executed in the 16th and 17th centuries. Inscriptions on the church façades are written in old Georgian script (Asomtavruli). The wall paintings are also accompanied with Georgian inscriptions, but there are several Greek inscriptions as well. The three-story bell-tower next to the Church was built in 1863.