The Tao-Klarjeti region, which is located in what is now north-eastern Turkey, used to be one of the most prominent political and cultural centers of medieval Georgia, especially in the 9th –13th cc. The activities of  St. Grigol Khandzteli (759-861) and his disciples in founding monasteries all over this area brought about flourishing and advancement in all fields of culture,  including in wall painting. The history of these monuments is closely linked to one of the most important moments in the history of Georgia – namely the upsurge of a strong movement aimed at unifying the Georgian kingdoms and principalities was initiated in this very region in the 9-10th cc. under the leadership of the Bagrationi royal family, who ruled in Georgia until the Russian Empire’s annexation of the Georgian states in the 19th c. Further dramatic events in the history of this region saw the destruction of numerous monuments of medieval Georgian architecture, as well as the murals adorning them. 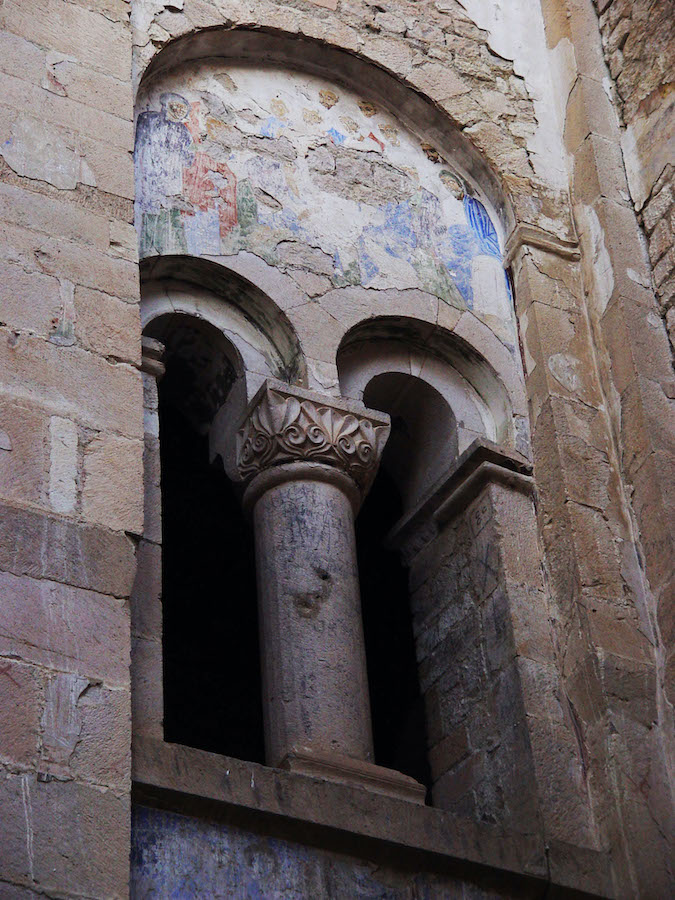 The Myrophores and the Apostles, Ishkhani Cathedral, South transept, 1032. 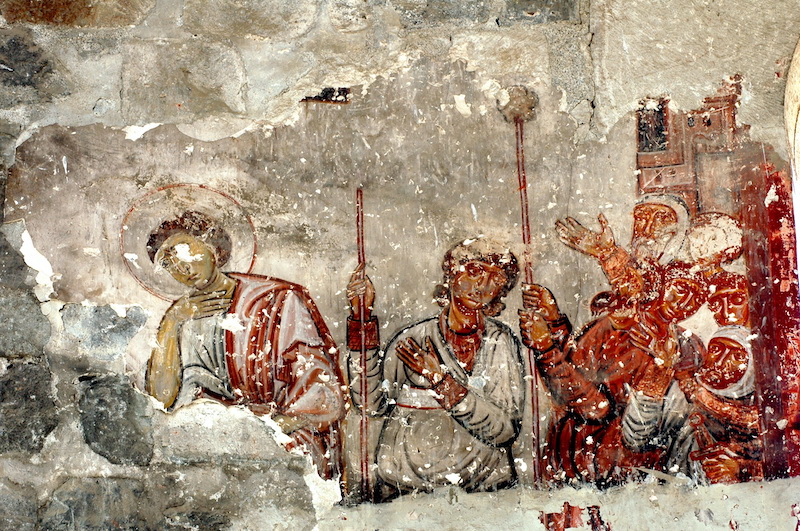 The murals are particularly important as they provide rich evidence for gaining an overall picture of the history of Eastern Christian painting in the period lacking Byzantine monuments proper. Besides which, they display the integrity and interrelation of the rich cultures that flourished in the Near East. 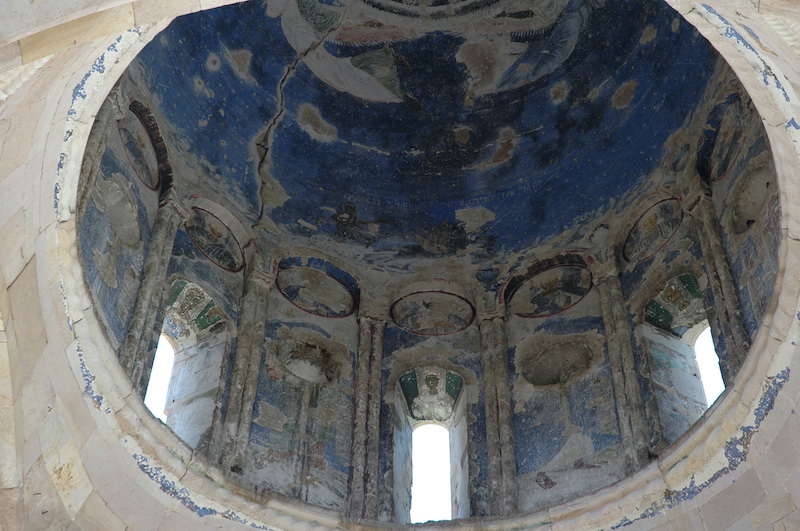 Ascension of the Cross. Ishkhani cathedral, painting in the dome, 1032

Notwithstanding their specific individual artistic character, the Tao-Klarjeti wall painting monuments  reveal many common traits that permit us to speak of  Tao-Klarjeti’s original painterly "school": the programmes of the sanctuaries are mostly dedicated to the “Majestas Domini’,

Unlike Byzantine art, there is an established programme of dome paintings, namely representation of the Triumphant Cross (e.g. in Khakhuli) or the Ascension of the Cross (Ishkhani). 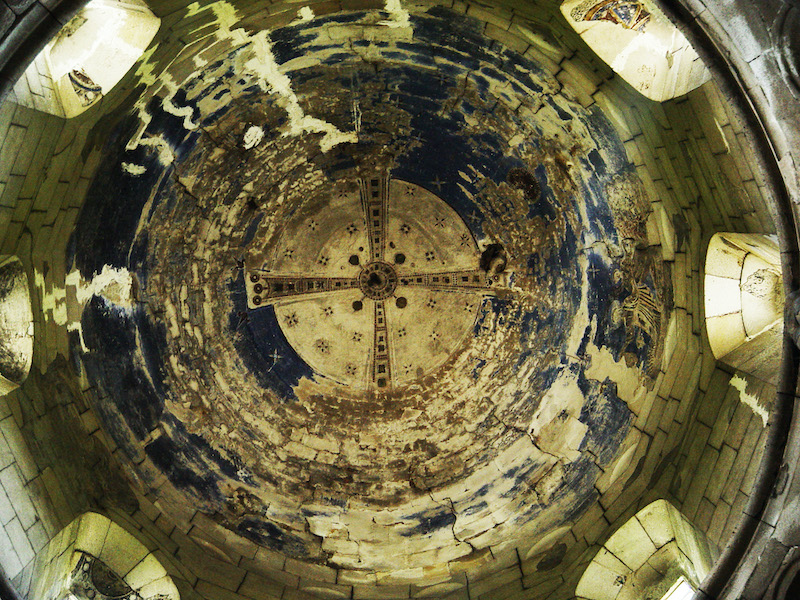 Representation of the Cross in the domes of Georgian churches, either painted or laid out in stone, dates back to the early Christian period, and is closely related to an event that took place in the 4th c. – namely the miraculous apparition of the Cross in the sky over Mtskheta, the ancient capital of Georgia. A characteristic and quite rare feature of the Tao iconography is the representation of Biblical themes in the dome (e.g. Zacharia’s Vision in Ishkhani; the Ascension of St. Elias in Khakhuli), as well as displaying an abundance of astral personifications; the dome compositions in the Khakhuli and Ishkhani churches are quite exceptional throughout the whole of eastern Christendom, from both iconographic and artistic points of view. 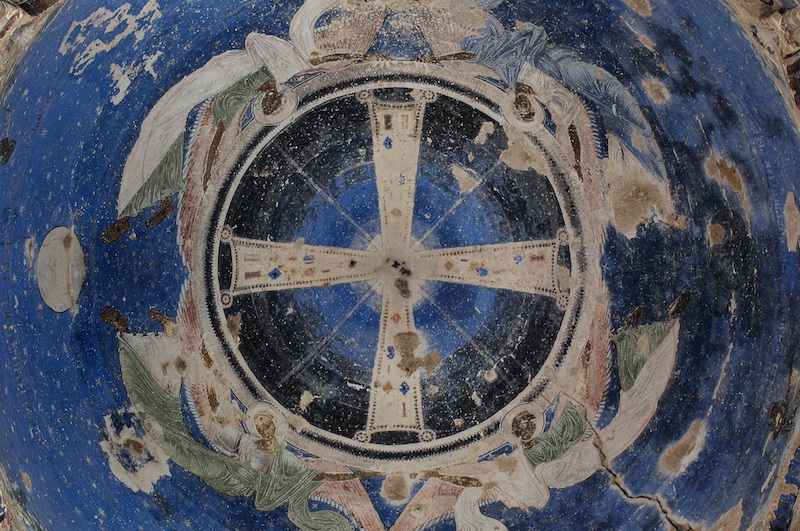 Ascension of the Cross. Ishkhani catherdral, painting in the dome, 1032.

A rare image is presented in the sanctuary window of the Othta Eklesia (Dört Kilise) church; namely the representation of Zion, depicted as the half-figure of a woman holding a model of the church (replicating the real church to its smallest detail) and wearing a crown in the shape of the architectural building (again an allusion to the Church – Mater Ecclesia - Zion). 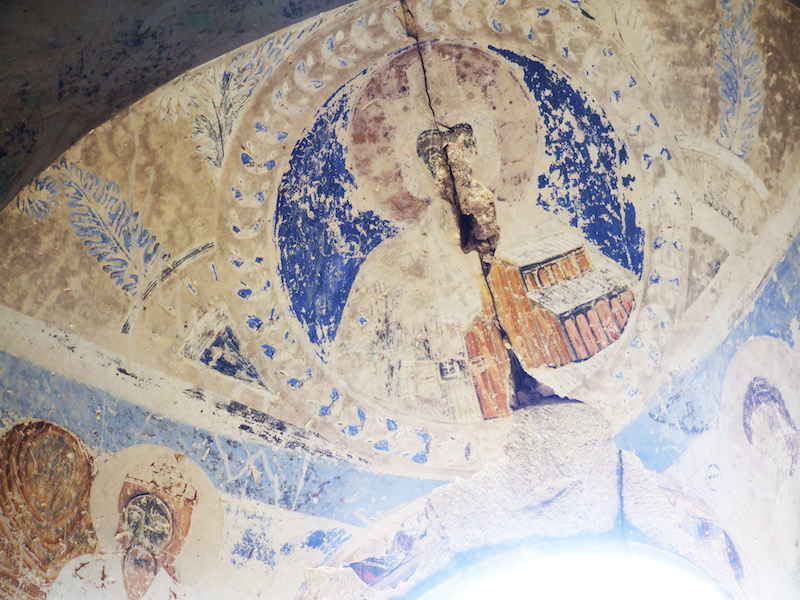 A relatively rare composition is preserved in the south apse of the Oshki cathedral, depicted with a relevant Georgian inscription, it represents a historic event that took place in the cathedral of Bana – presumably the marriage of King Bagrat IV to the Byzantine princess. 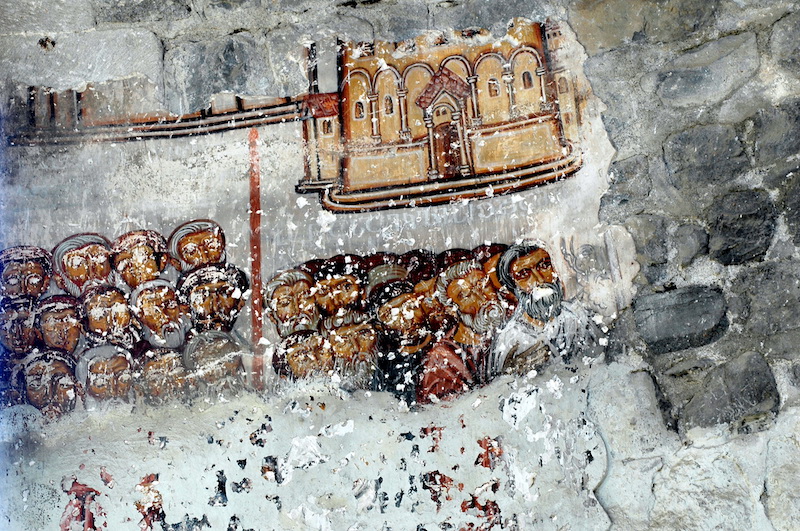 The painterly school of Tao-Klarjeti is distinguished not only by its sophisticated and unique iconographic programmes, but also due to the very high artistic level, executed with the same air of grandeur and magnificence that characterizes the architecture of this region. 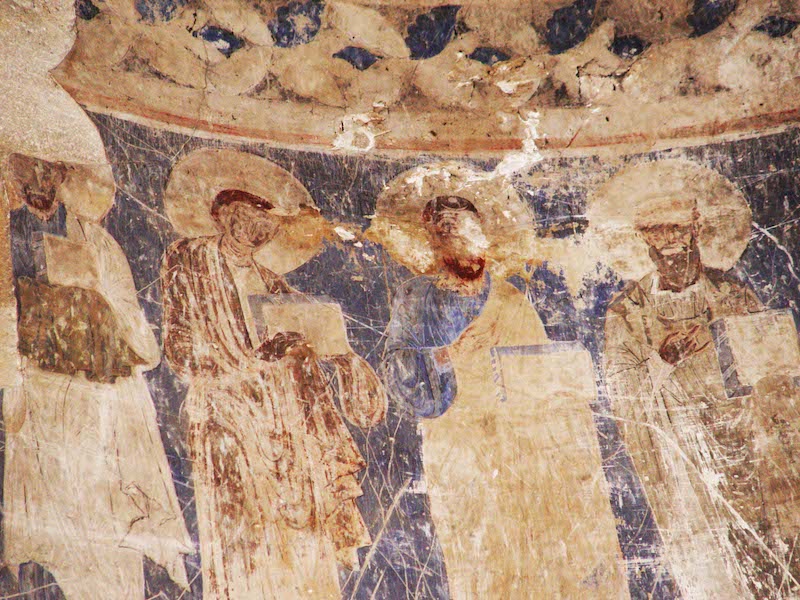 Apostles, Khakhuli church, painting in the sanctuary, turn of the 10th-11th cc.

Even in their present semi-obliterated and demolished states, the wall paintings of the churches and cathedrals of Tao-Klarjeti impress the beholder with their refined linearity, rich colouring based on deep lapis lazuli, glistening green and vermilion, pure white and numerous shades of ochre, the elongated and elegant proportions of the figures, their representative postures and gestures, the plastic rendering of the forms and multilinear treatment of the  draperies, the deep spirituality of the images, the dynamic compositions and monumentality of the overall layouts, etc. 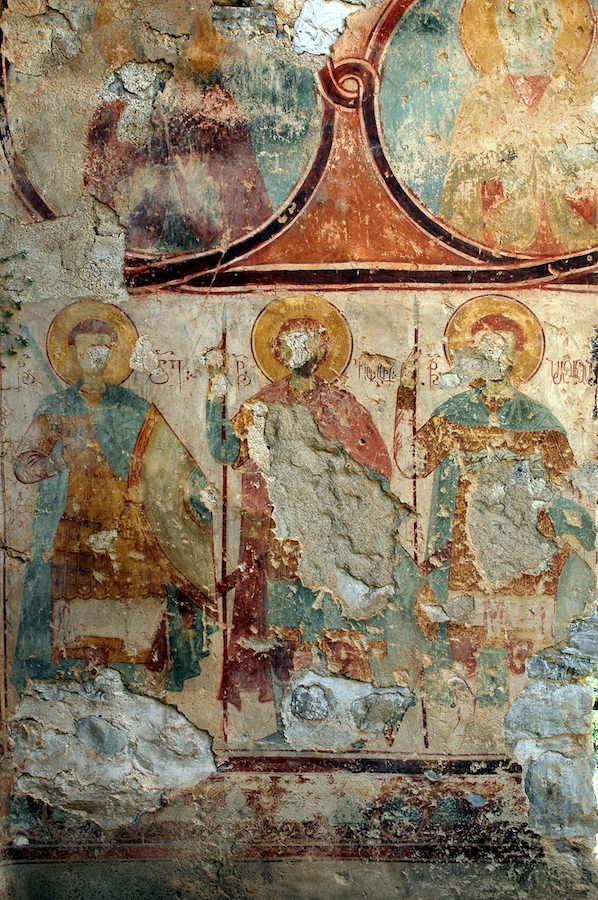 The cultural “prominence” of these paintings has been widely discussed, and many assumptions have been made as to which national culture they may belong, although the history of these monuments and their donors together with the predominantly Georgian inscriptions attest to the fact that they belong to Georgian artistic milieu. Above all, the specific sense of balanced compositional arrangement and coloring, a certain original artistic taste and approach to the treatment of forms and other pure stylistic traits also indicate Georgian cultural traditions. 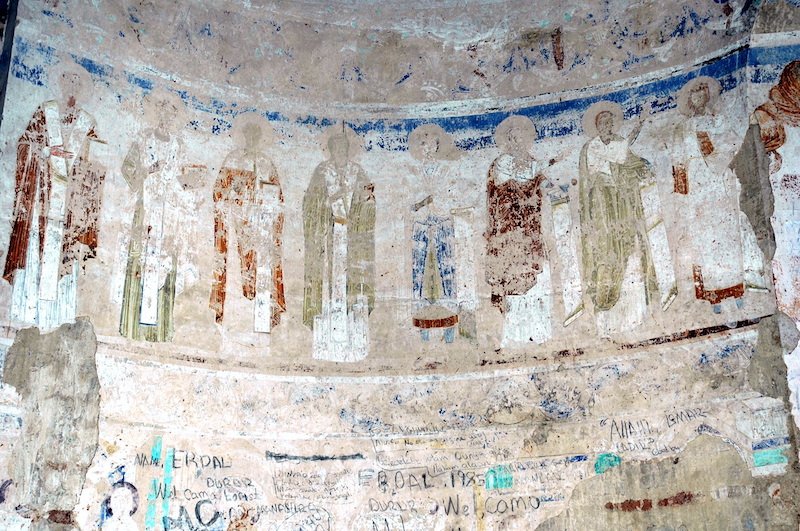 The Holy  Bishops and the Prophets, Othta Eklesia, murals in the sanctuary, late 10th.

Certainly, the geographical position of these regions, being much closer to Byzantium proper than other parts of Georgia, brought about closer cultural ties and interrelations. Unfortunately, there are not so many genuine Byzantine (meaning Constantinopolitan) monuments of wall paintings in existence any longer to make further generalizations.

The outstanding mural paintings of the Tao-Klarjeti  cathedrals and churches represent  the pinnacle of medieval Georgian art. 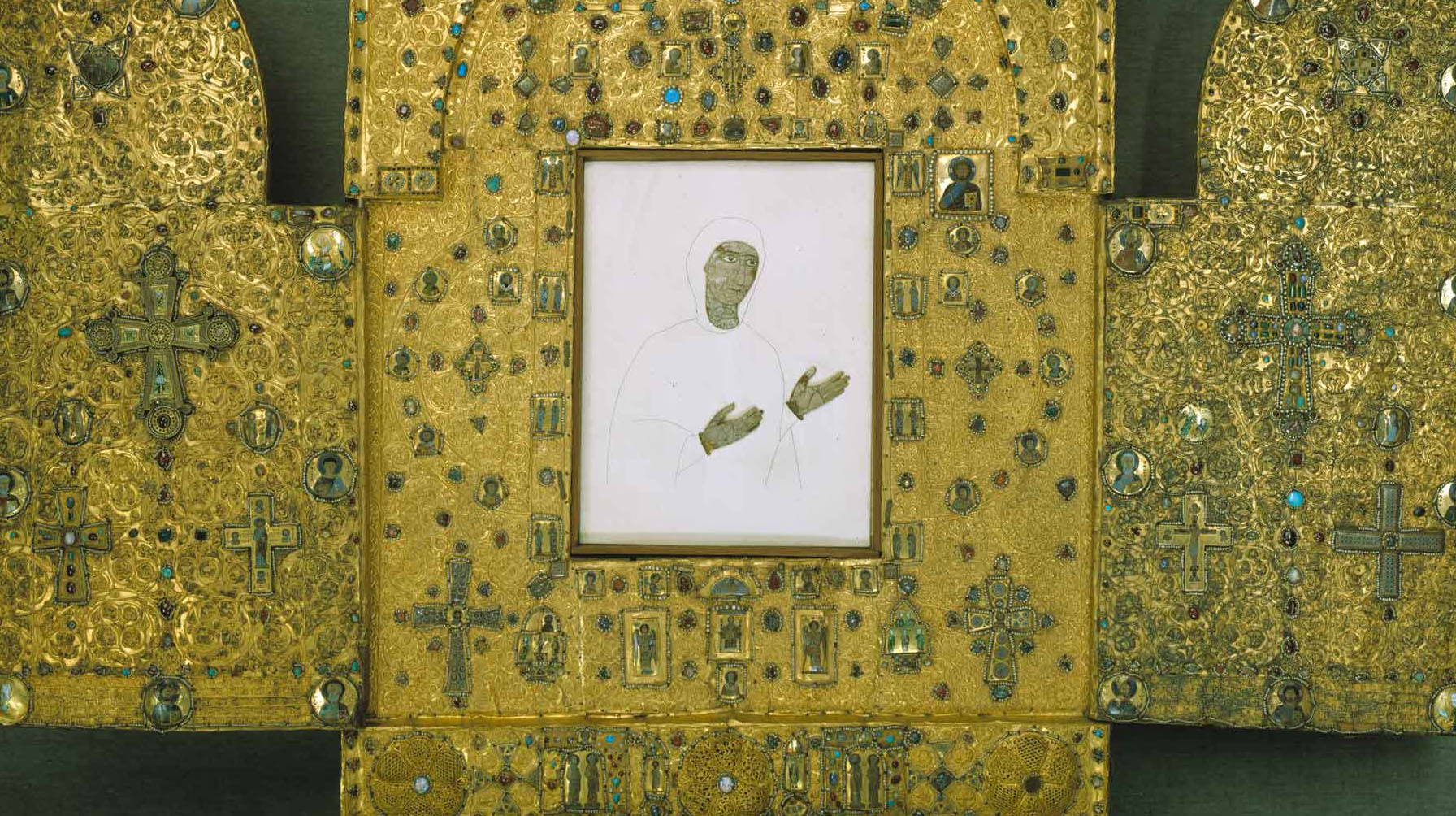 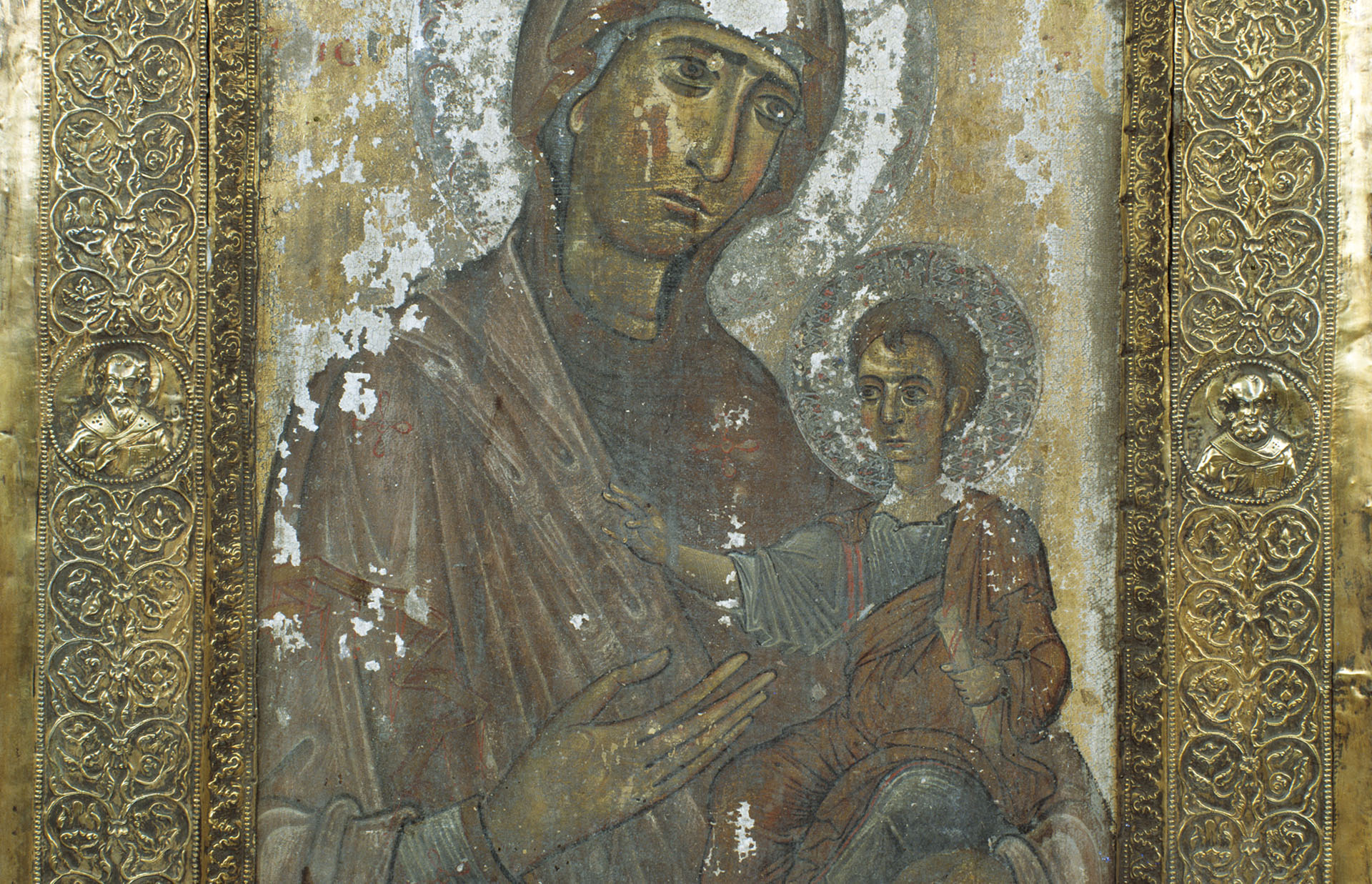