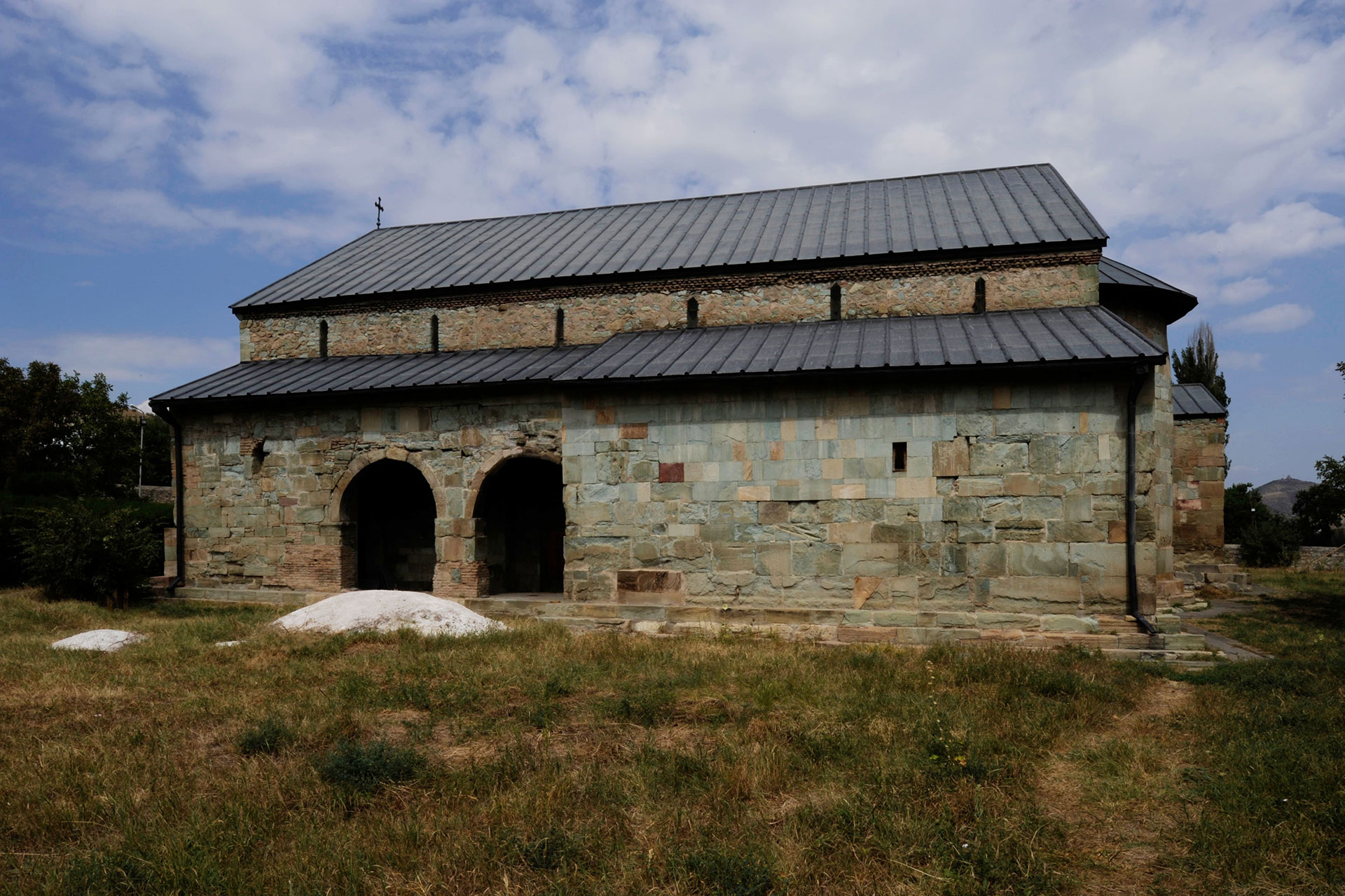 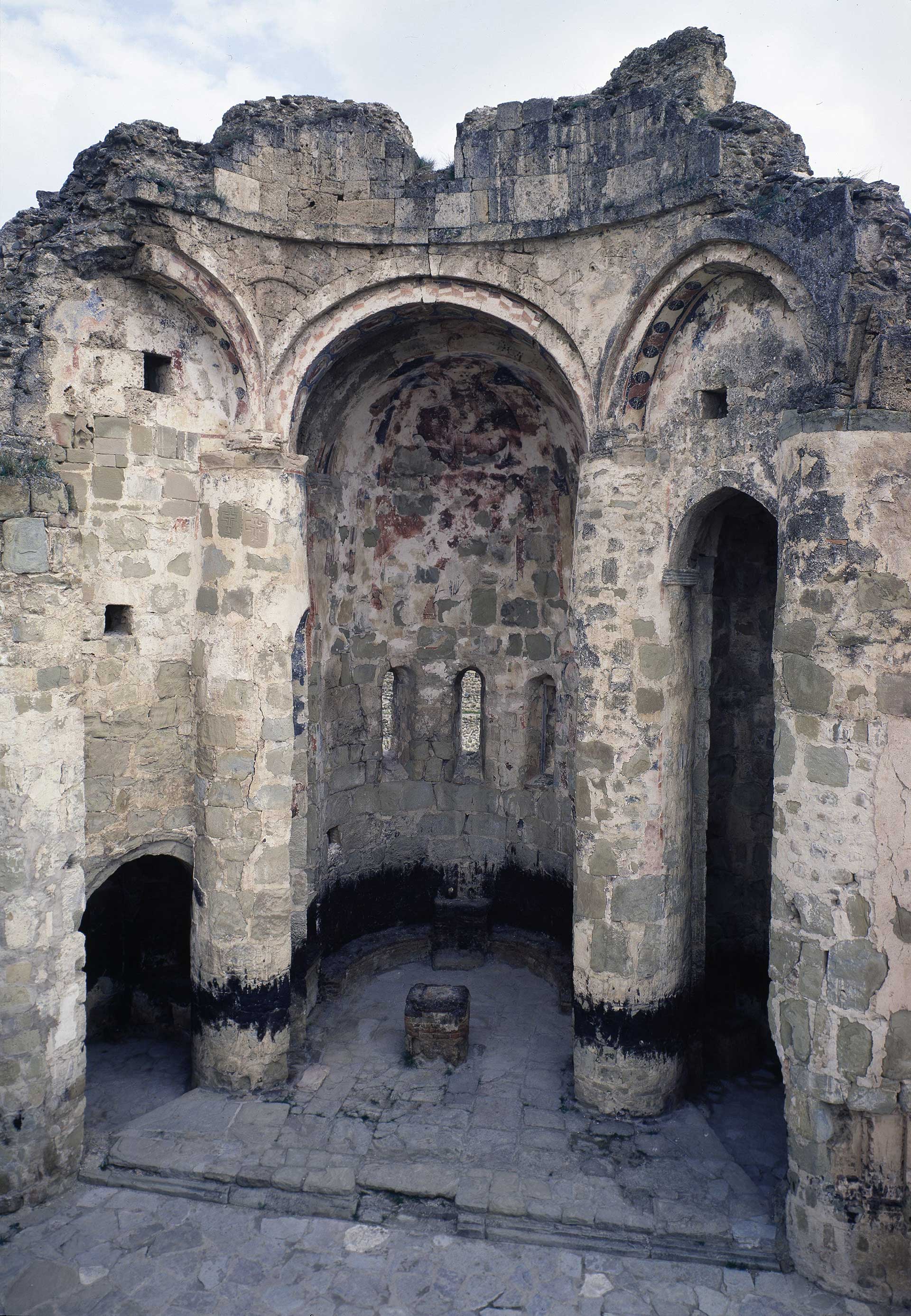 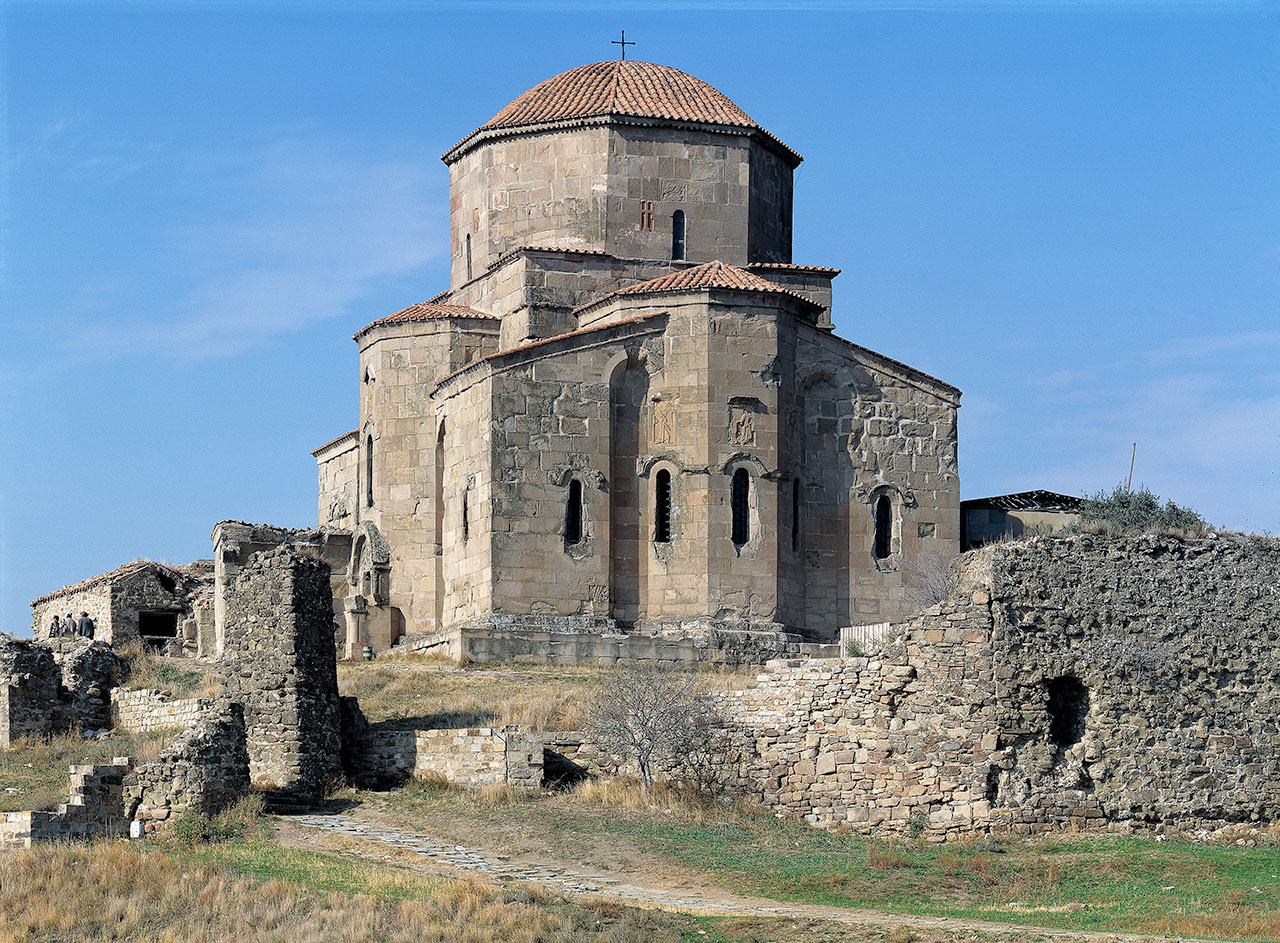 Church of the Holy Cross near Mtskheta (Jvari Church)

Standard early Christian domed church in Georgia is a small central-plan cruciform building with an octagonal drum rested on squinches thrown astride the corners of a central square bay – such as the croix libre type church of St John the Baptist in Shiomgvime monastery built in 560s. From the late sixth century, domed structure becomes the leading type of church building. The Cathedral of Ninotsminda is built on quatrefoil plan with additional two-apsed chapels disposed in the diagonals. This planning concept was developed by the architect of the Church of the Holy Cross at Mtskheta (586-605), a four-apsed structure with additional rooms in all four corners and facades amply adorned with sculptures. The church stands on the rocky mountaintop and is Georgia's one of the famous landmarks. Soon after it was completed, its architecture became an example for imitation being repeated in several churches built in various parts of Georgia (Ateni in Shida Kartli, Martvili in Egrisi, Dzveli Shuamta in Kakheti). Similar plan was known in Armenia as well. 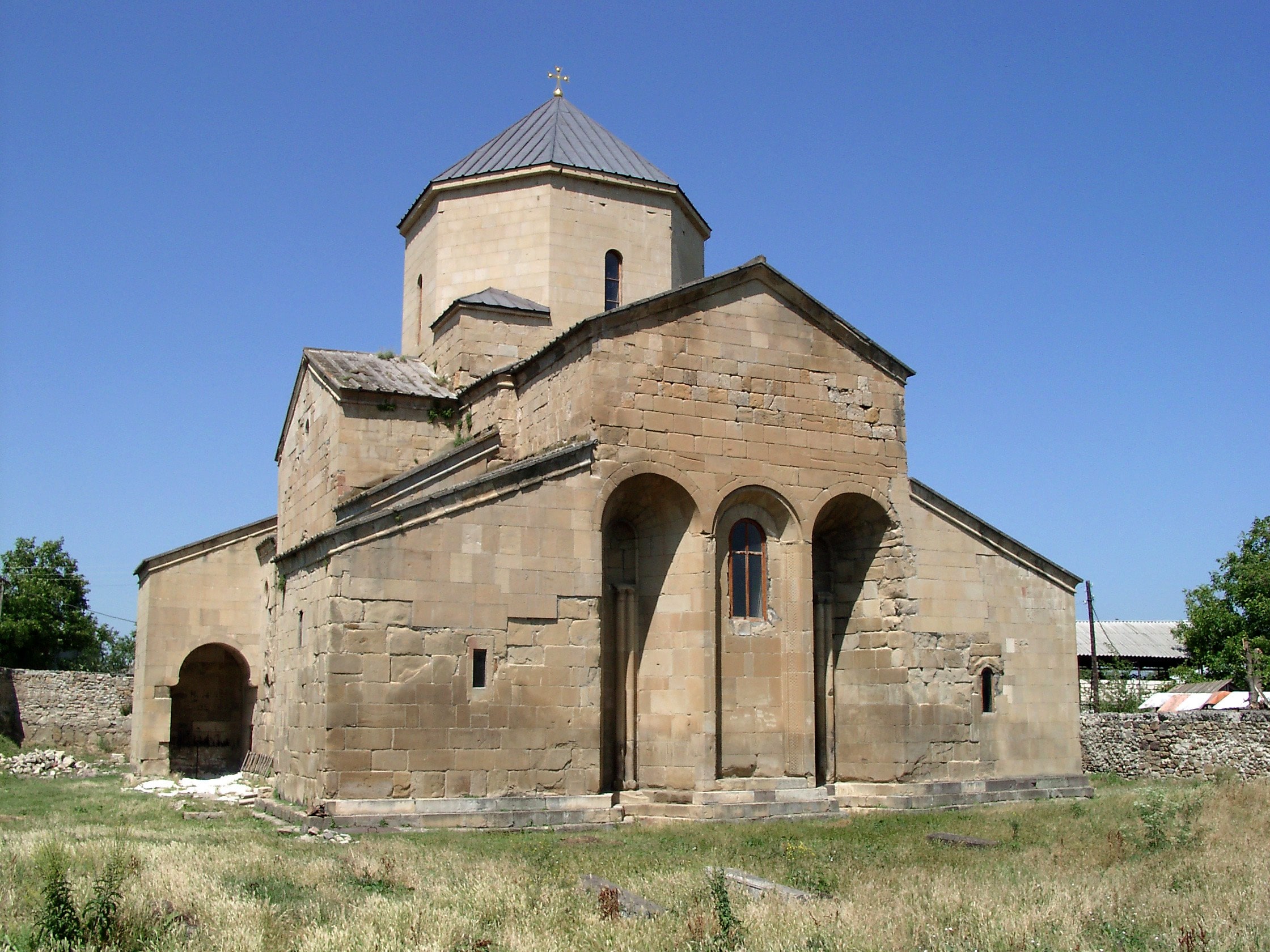 The church in Tsromi built around 630 heralds new developments in the Early Medieval architecture. Together with the Armenian churches of the same plan, Tsromi is one of the earliest structures having a dome supported by four free-standing piers and a transept with short arms (croix inscite type).

The masonry of large ashlar blocks is an integral part of the architectural design of early Medieval Georgian churches. Their building technique and structural elements find analogues in the architecture of Armenia, Central Anatolia, and Northern Mesopotamia. 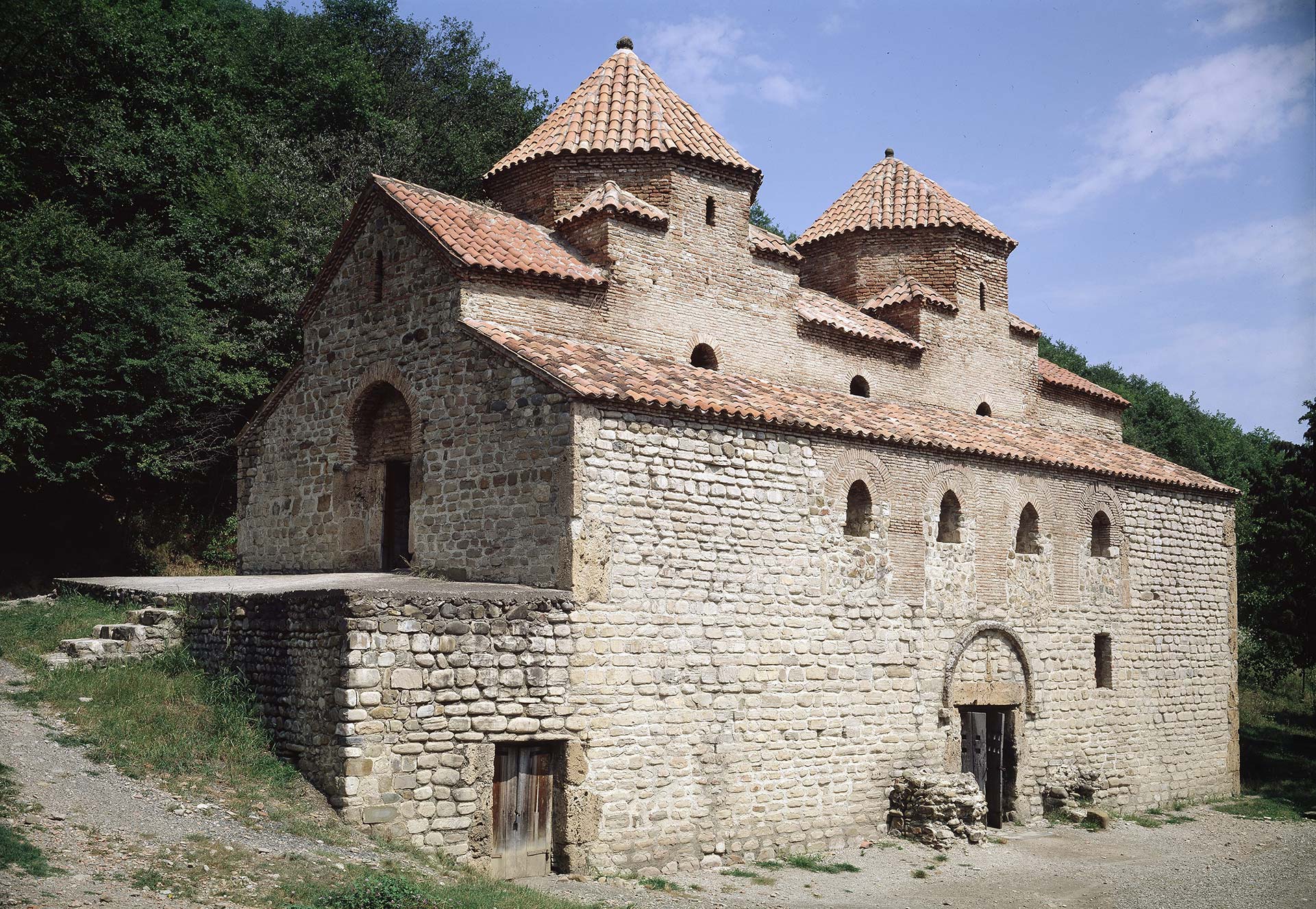 Church of the Mother of God near Gurjaani

Arab invasion in the mid-seventh century put an end to the flourishing of architecture in Georgia. However, some important churches were built in the following period too. The Church of the Mother of God in Gurjaani is the only medieval church in the Caucasus with two equal domes. It also provides one of the earliest samples of using brick together with stone in Georgian church architecture. 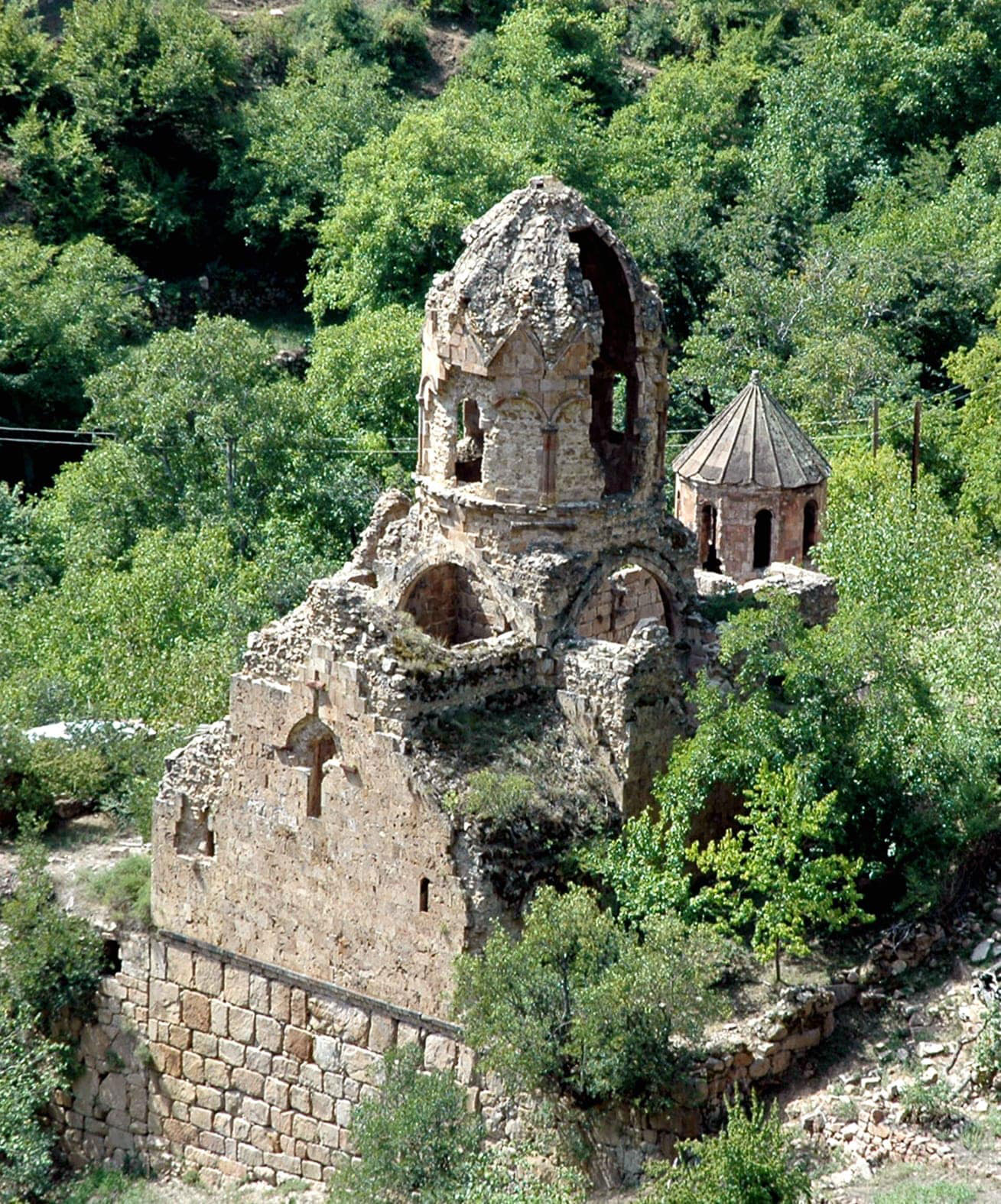 Since 820s, many monasteries were constructed in Klarjeti (present north-east Turkey) due to the activity of St Gregory of Khandzta, the leader of the great monastic movement. This wave of construction was supported by the Bagrations, the local ruling family that later became the royal house of the united Georgian kingdom. These monasteries (Khandzta, Opiza, Doliskana, etc) became hotbeds of new architectural ideas, which were developed by architects working for the king David Kuropalates in the second half of the tenth century in Tao (present north-east Turkey). 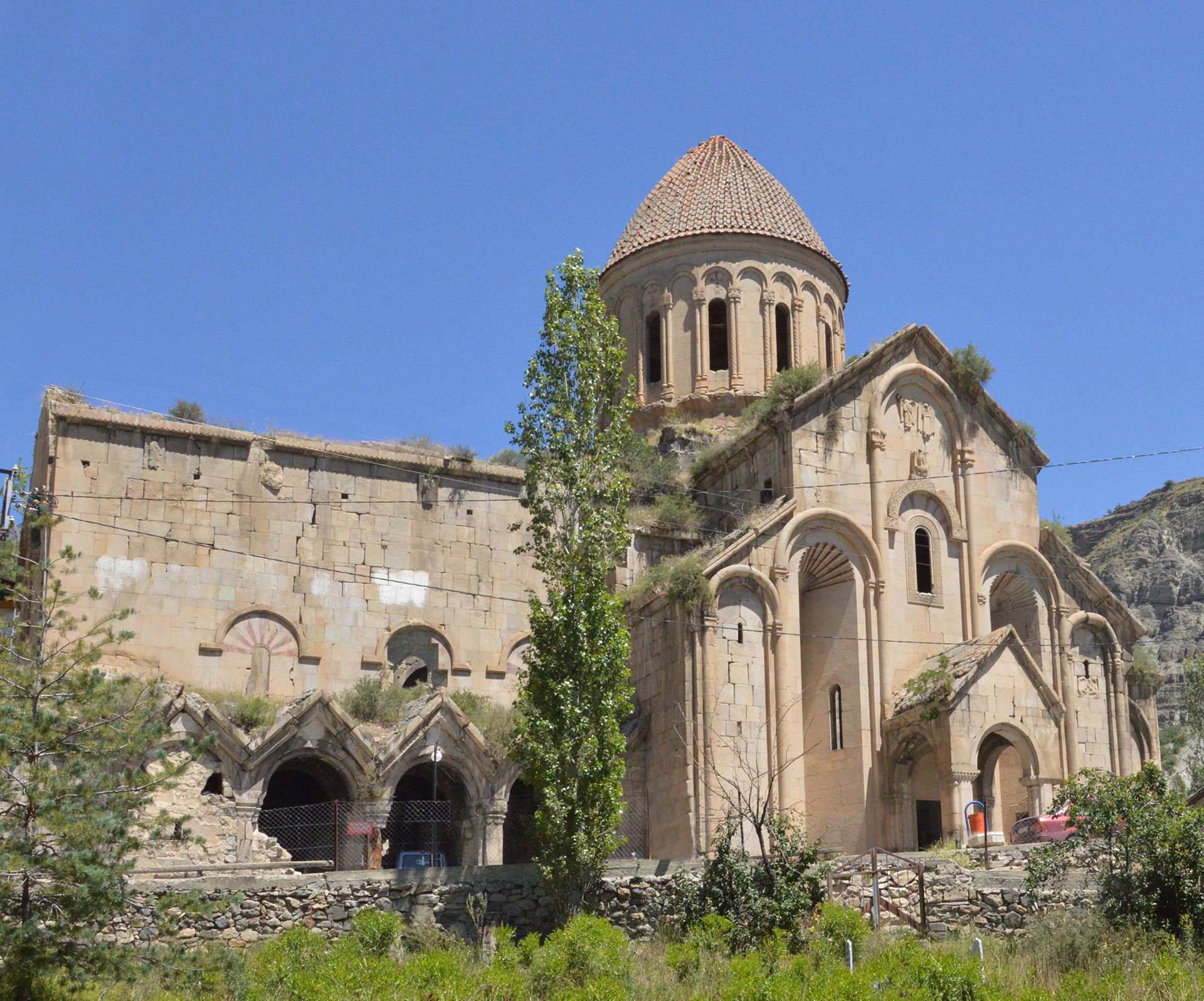 Church of St John the Baptist in Oshki Monastery 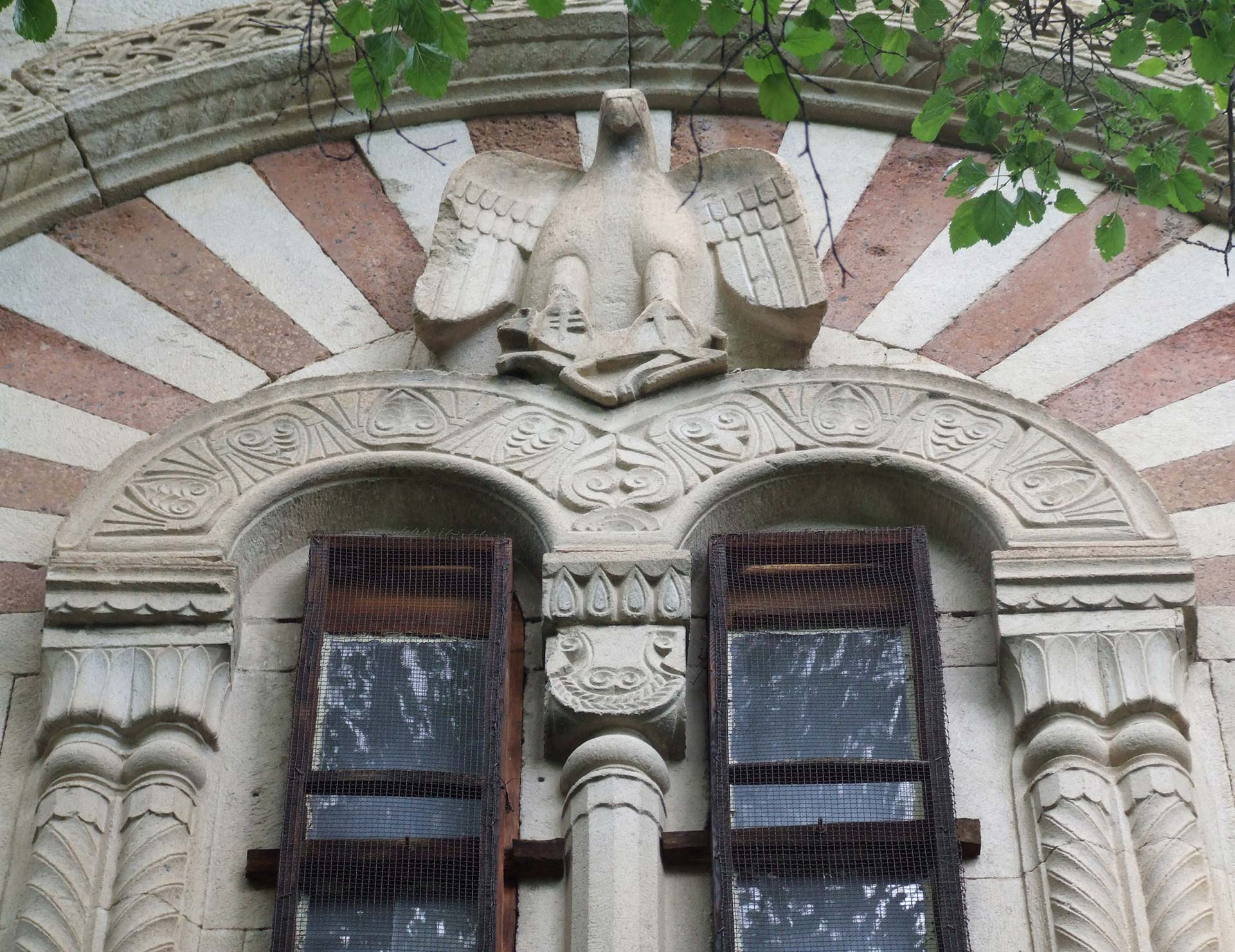 Church of  the Mother of God in Khakhuli Monastery. Double window on south façade

Being fully faced from outside with smoothly hewn ashlar and richly adorned with carved ornamentation and sculptures, great churches of Tao served to demonstrate growing power and prestige of the Bagrations. The church of St John the Baptist in Oshki Monastery (963-973) is the largest and the most imposing among them. Its numerous inscriptions give valuable information about its donators, builders, construction process and expenses. Other important buildings are the Cathedral of Khakhuli and the church in Otxta Eklesia Monastery, both built in 960s.

Abkhazia was another region where architecture was flourishing in the tenth century. Unlike other provinces of Georgia, in the early Middle Ages, Abkhazia was exposed to a strong Byzantine cultural influence that was reflected in architecture as well. From the ninth century onward, Georgian culture gradually became dominating in Abkhazia including its architecture, though church buildings still revealed some Byzantine flavour – such as the Cathedral of Mokvi (957-967). 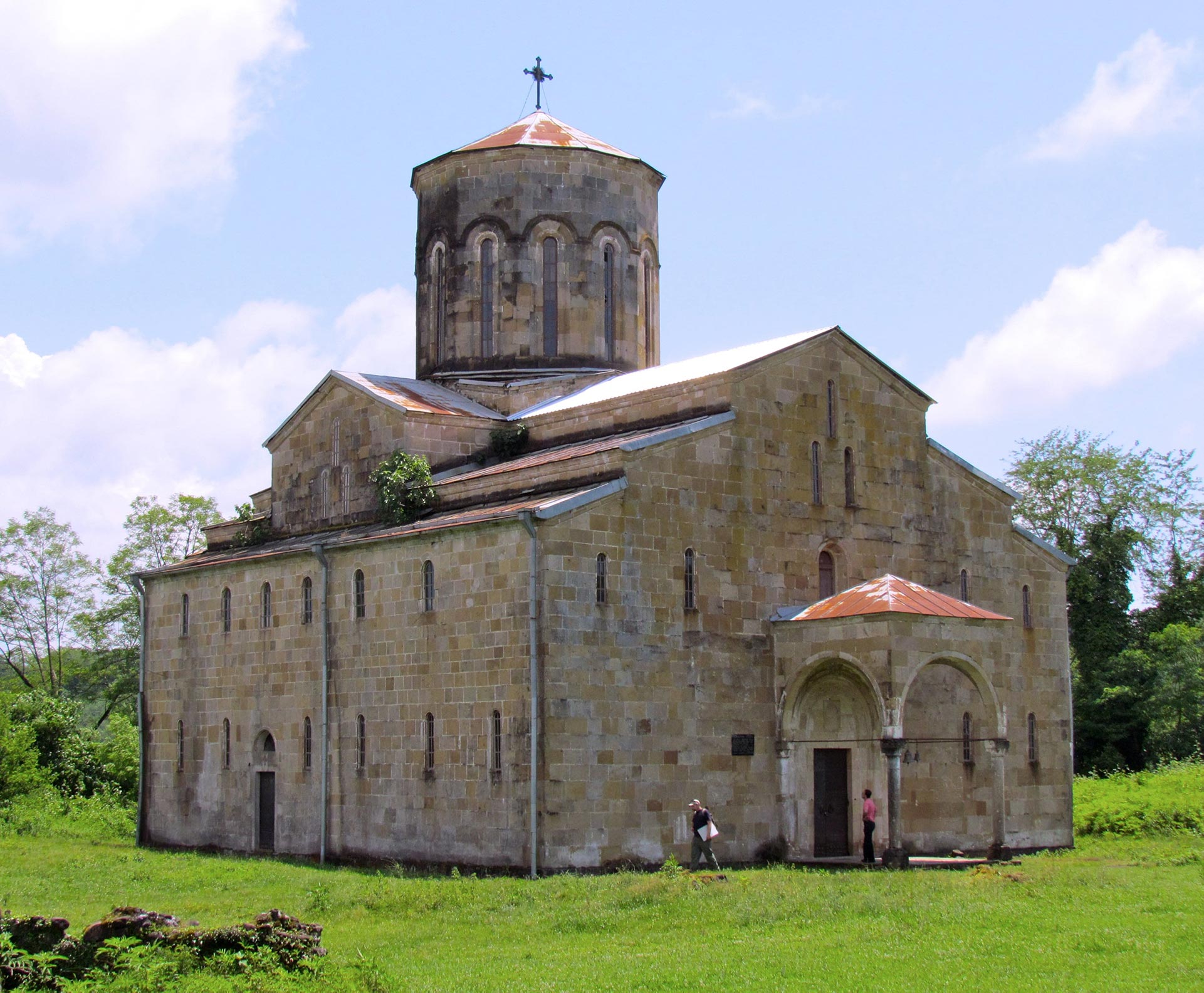 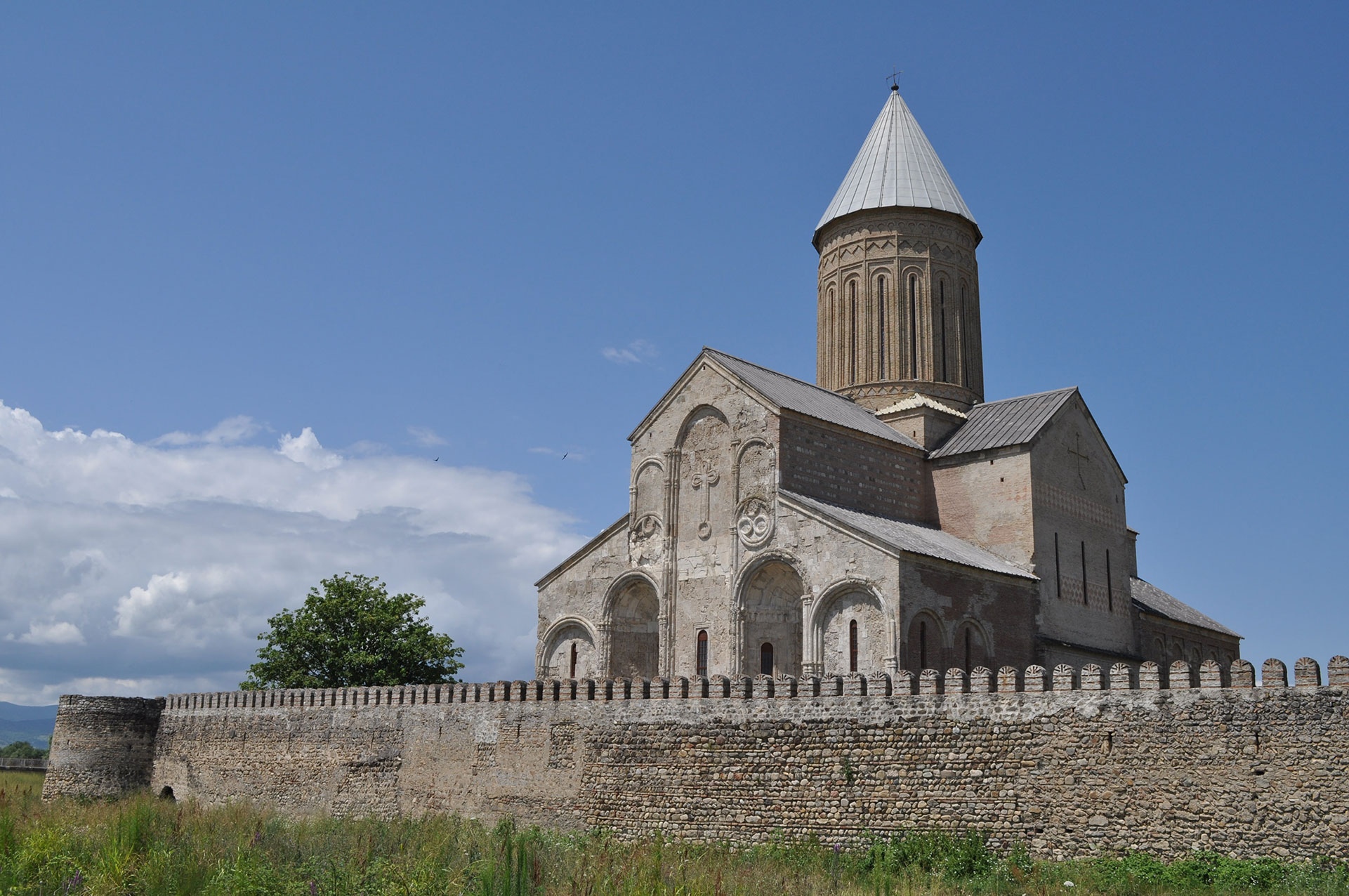 The last decades of the tenth century and the early eleventh century saw the crucial events. King Bagrat III united most part of the country under his crown. Cultural and spiritual revival reached its peak. Buildings of outstanding quality were set up in large numbers all over the country. The Cathedral of Kutaisi (completed soon after 1000), usually called “the Church of King Bagrat” after the name of its donator, was the first large structure built under the royal patronage in the new capital of Georgia. Its three-apsed plan influenced the architecture of the huge Cathedral of Alaverdi (early eleventh century). 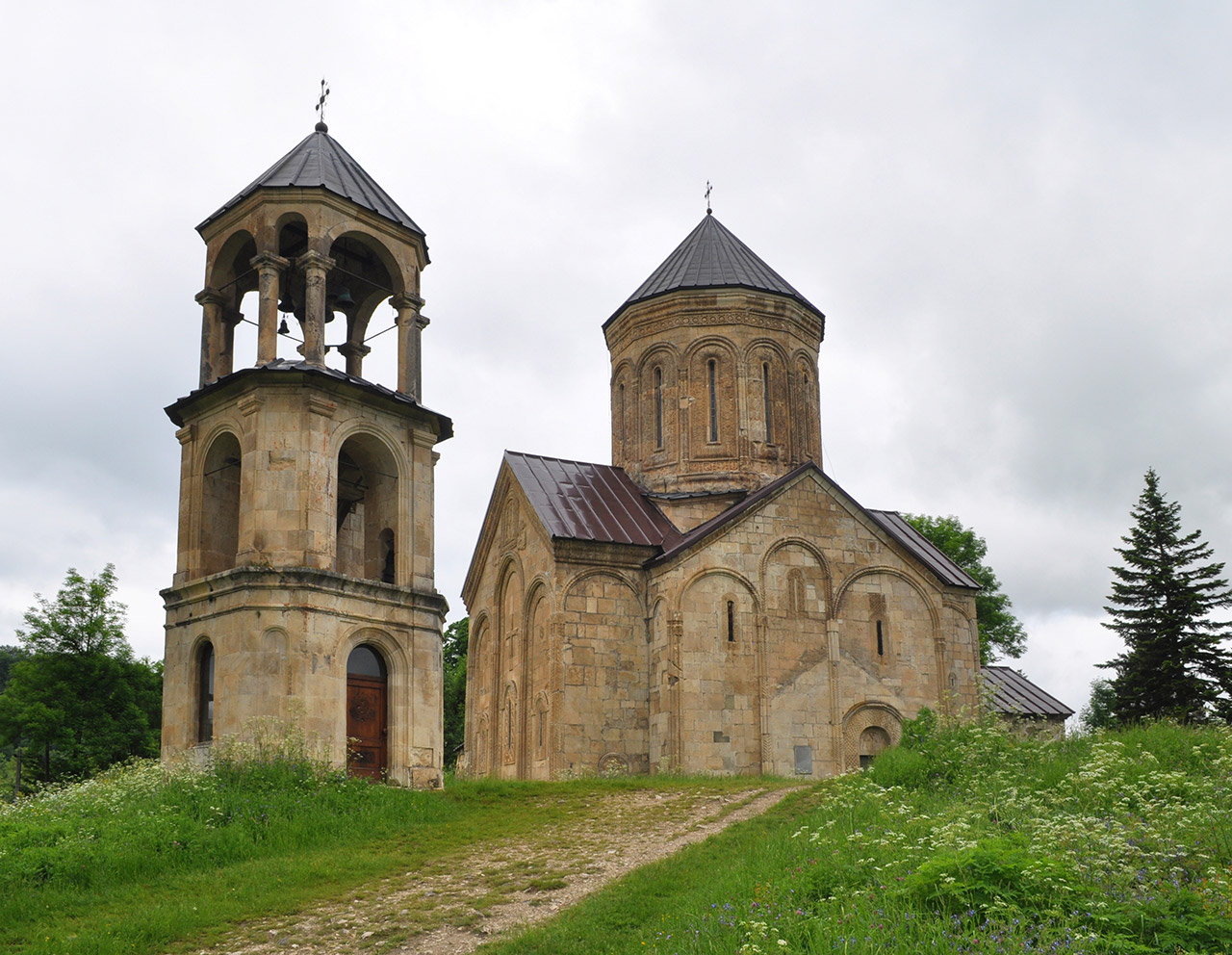 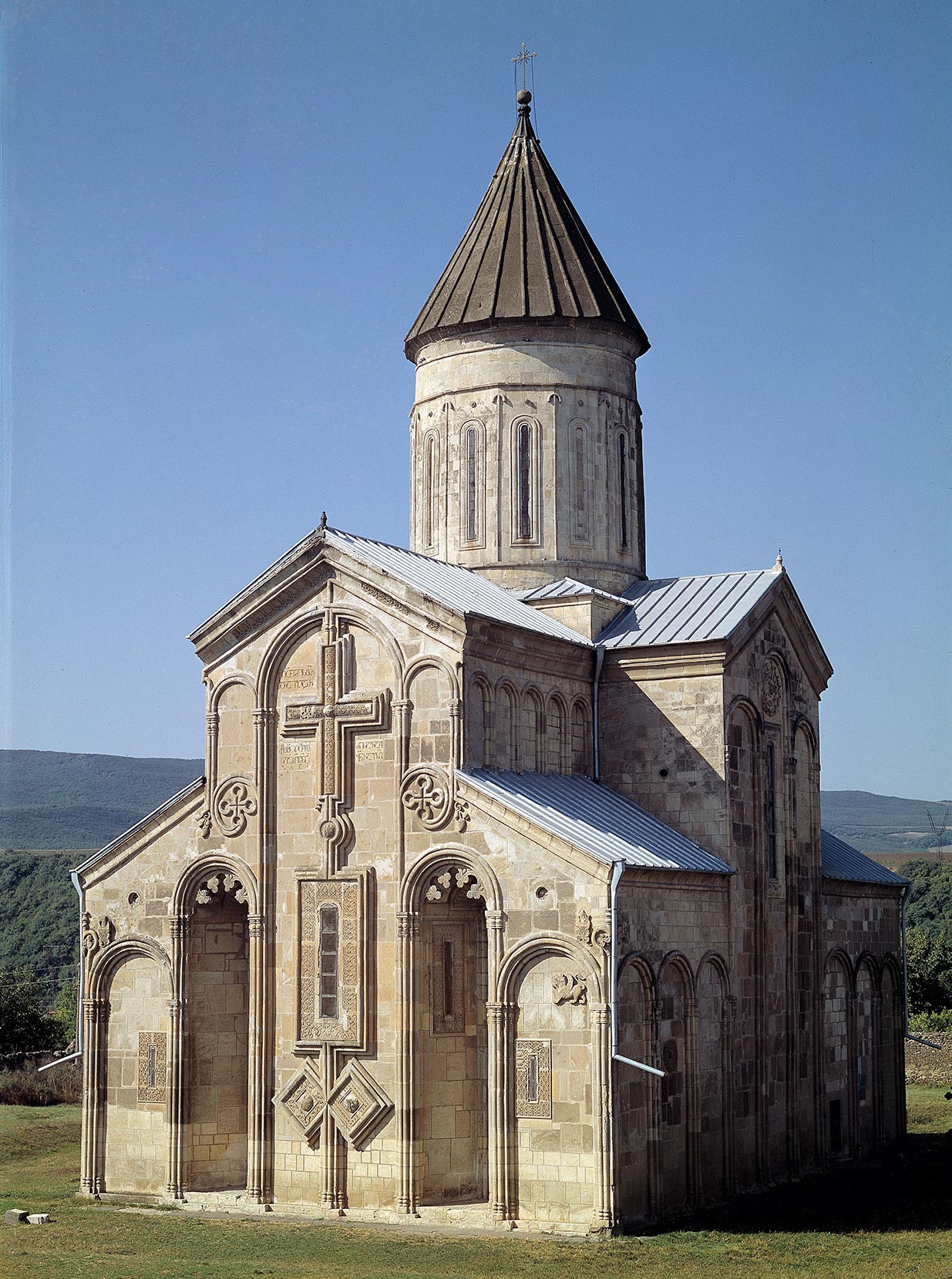 The Cathedral of Nikortsminda (1010-1014) displays a marvelous marriage of architecture and sculpture. The Cathedral of Samtavisi (completed in 1030) is particularly important for its role in the development of façade decoration. The composition of its east façade with the ornamental cross above the framed window gave rise to a great wave of emulation. 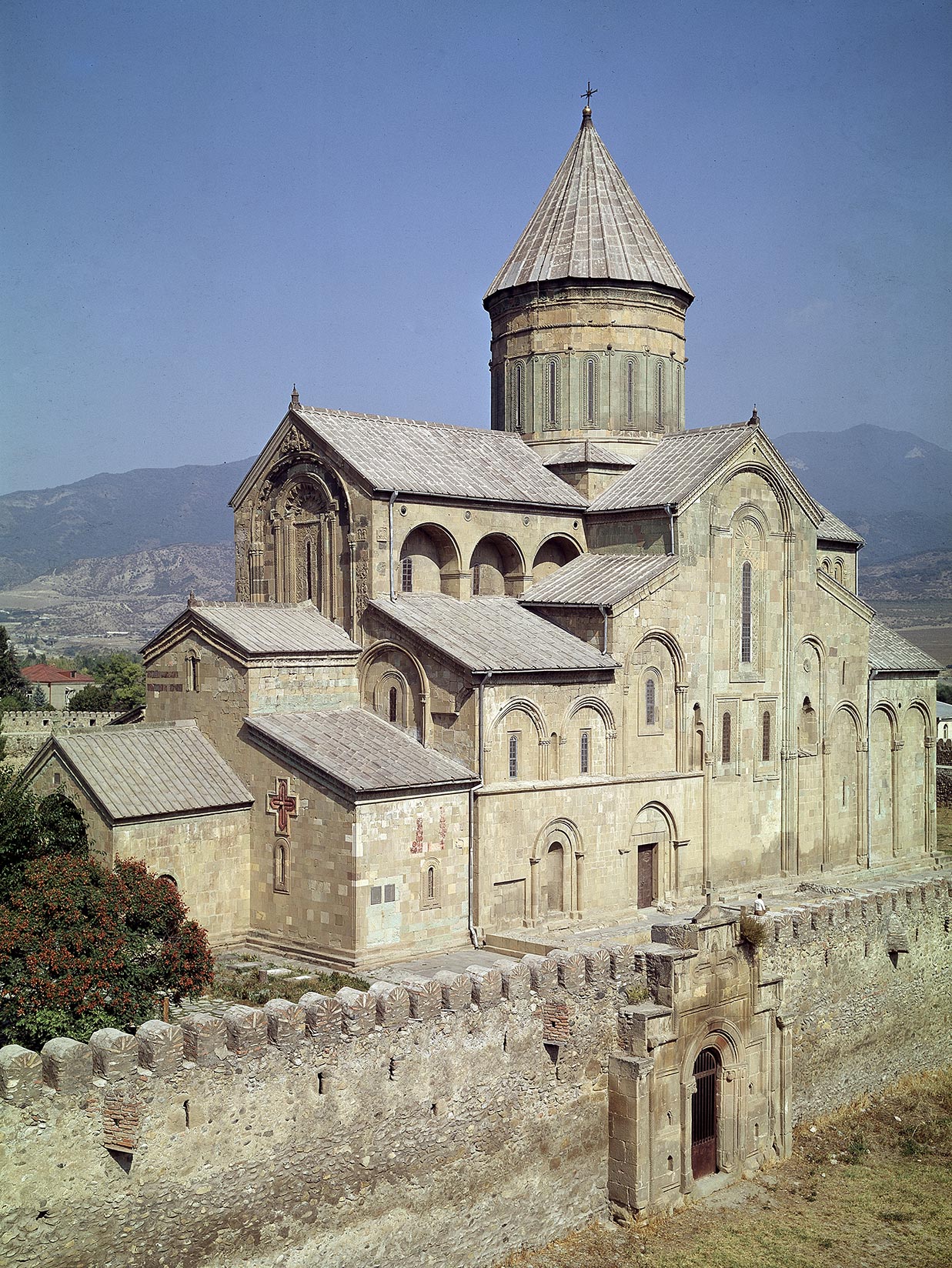 The Svetitskhoveli Cathedral of Mtskheta (1010-1029), the largest Medieval church in Georgia, was built on the site of the first church founded by king Mirian and became one of the national symbols due to its religious and historical significance. All of these churches are faced with smoothly hewn blocks and richly adorned with carved ornamentation. The system of exterior decoration is based on blind arches that embrace all four façades. 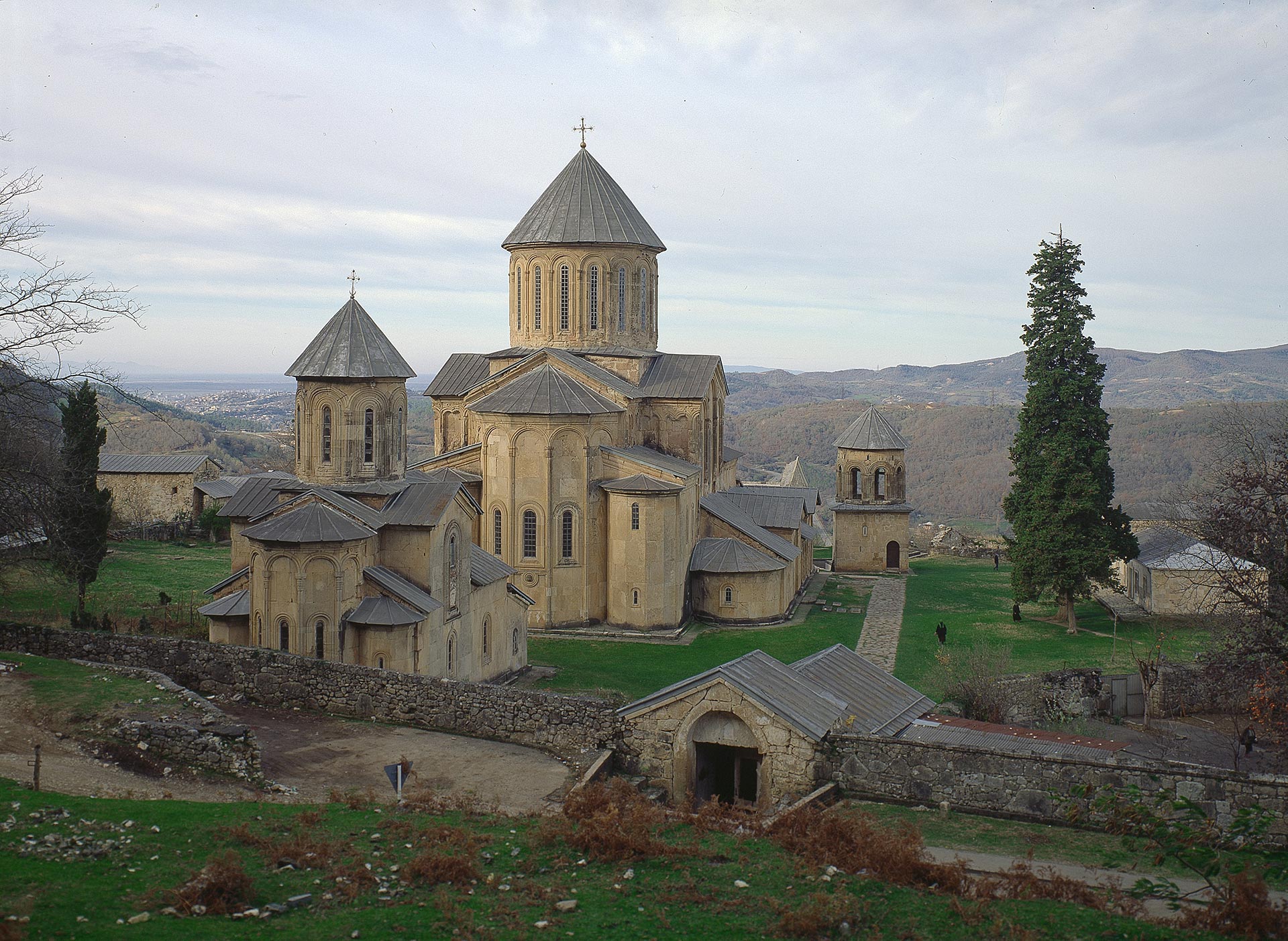 The late tenth and eleventh centuries went down in Georgian history as the Age of Great Cathedrals while the following period, the twelfth century, can be called the Age of Great Monasteries. One of the largest of them was Gelati near Kutaisi constructed by King David the Builder between 1106 and 1125. The main church of the monastery standing in the middle of the site has mosaic painting in its apse, the only survived mosaic decoration of the church in Georgia. Vardzia is a huge rock-cut monastery of the period of George III and Queen Tamar. Thirteen rows of caves are hewn into the depth of the cliff including 15 churches and chapels, several hundred monk’s cells, a royal chamber, workshops, etc. 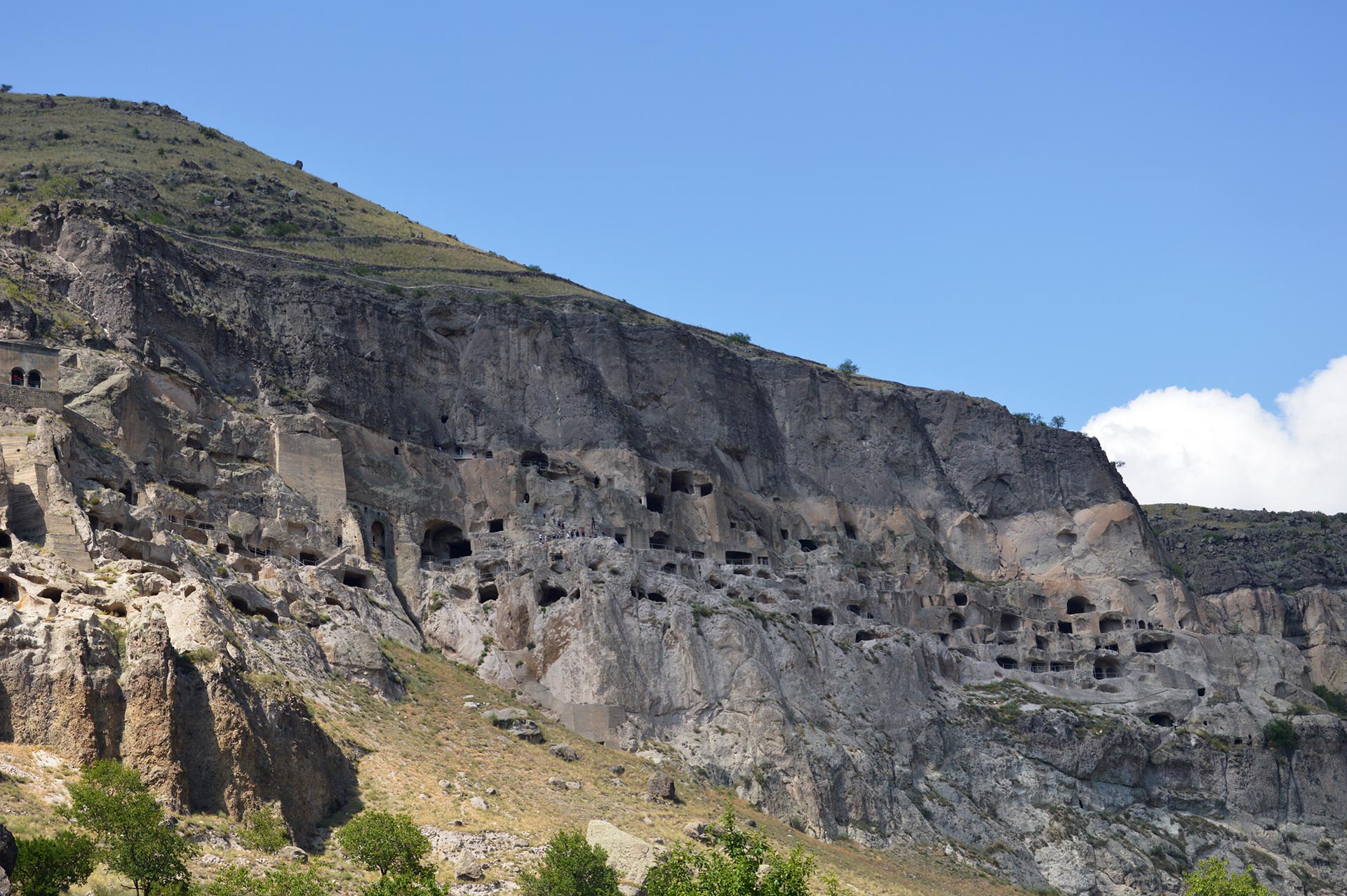 The Golden Age of architecture was followed by a long period of decline that started with the Mongol invasion and lasted more than five hundred years. This period was marked by the provincialization of Georgian architecture; however, some churches still displayed a high technical and artistic quality (St Saba in Sapara Monastery – around 1300, Ananuri monastery – sixteenth and seventeenth centuries).