In ancient times, a large fortress known as Apsaros was located in the modern village of Gonio, and served as one of the most important Roman strongholds in the Eastern Black Sea region. Although the exact date of its foundation is unknown, it is believed to have been built in the first century AD, and restored in the fourth and sixth centuries.

The fortress stands on flatlands near the sea coast, and during the Roman period it was directly linked to a harbour in order to secure safe navigation. It is currently situated approximately 200m from the sea as a result of environmental changes over the centuries. 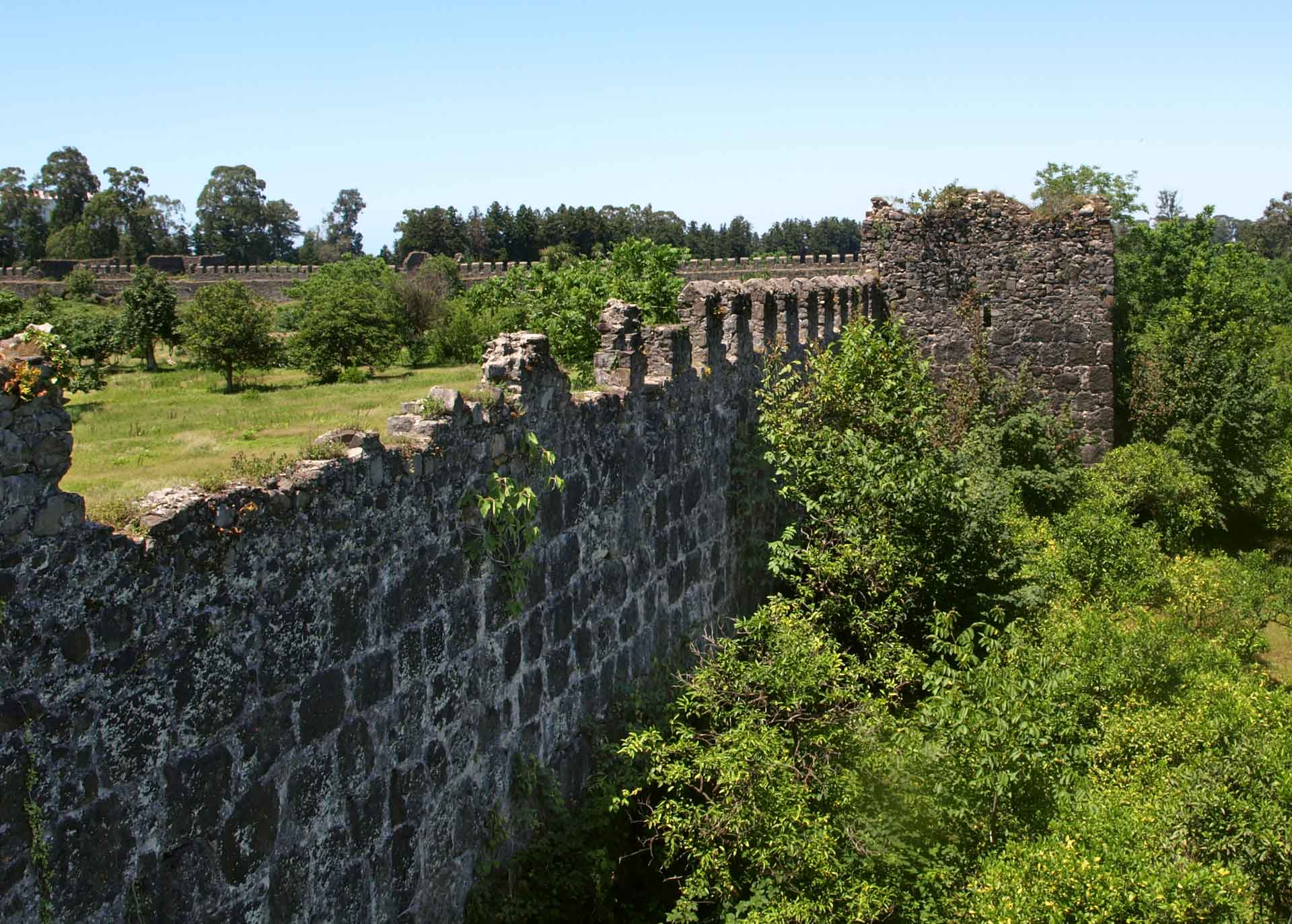 General view of the fortress walls

Apsaros fortress is distinguished by its large scale and for the quality of its masonry. It is of a slightly elongated rectangular plan, measuring 245m × 195m and covering an area of 4.78 ha. The fortress has an impressive wall-circuit 5 m in height, which is built entirely of stone. 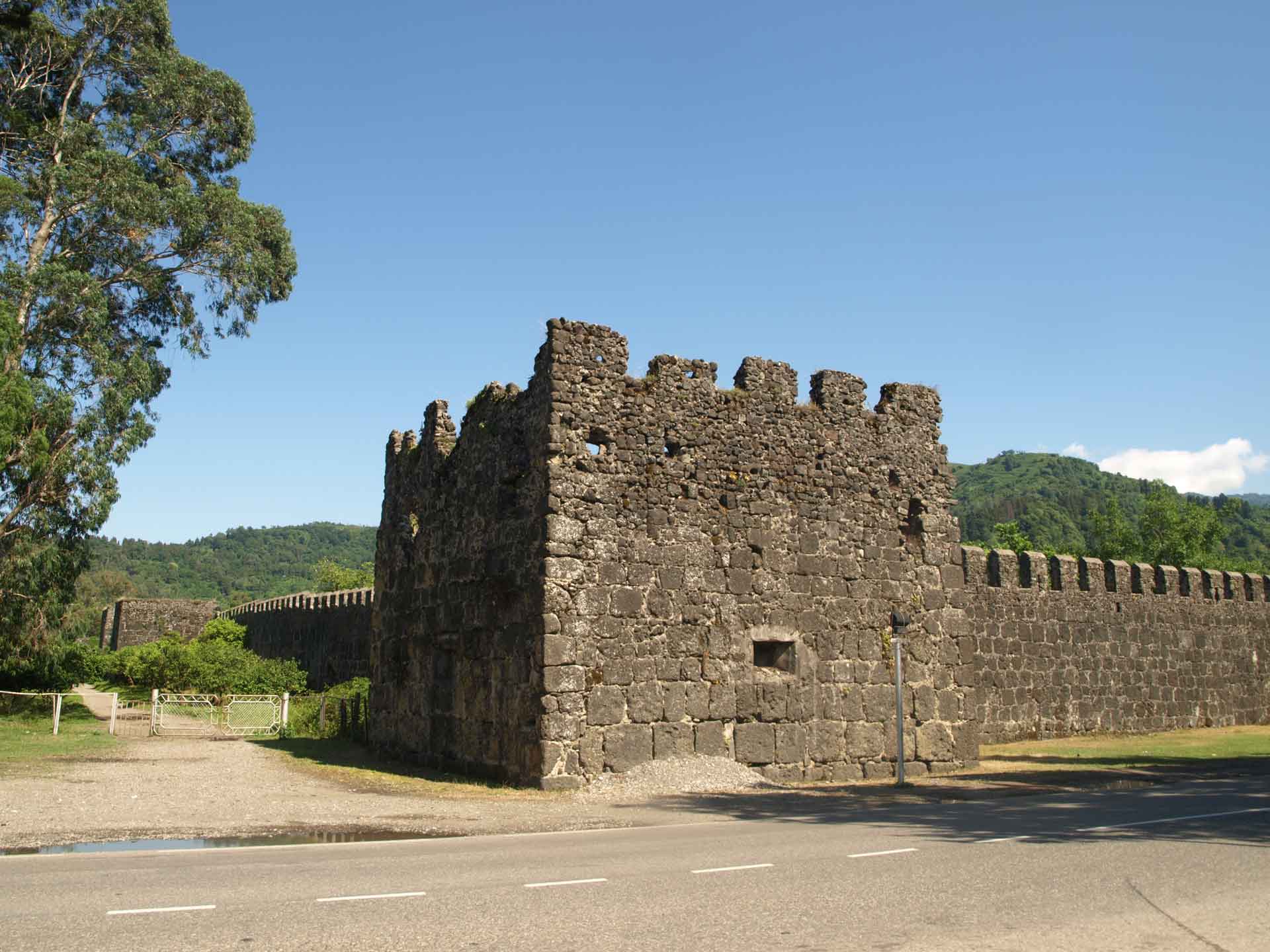 Square, rectangular, and U-shape towers were built at intervals along the walls and at the corners of the circuit. It appears that there was a total of 22 towers prior to the early Medieval reconstruction. The corner bastions are larger and taller, reaching 7m in height. The majority of towers are two-storied, and the chambers of both storeys had timber roofs. 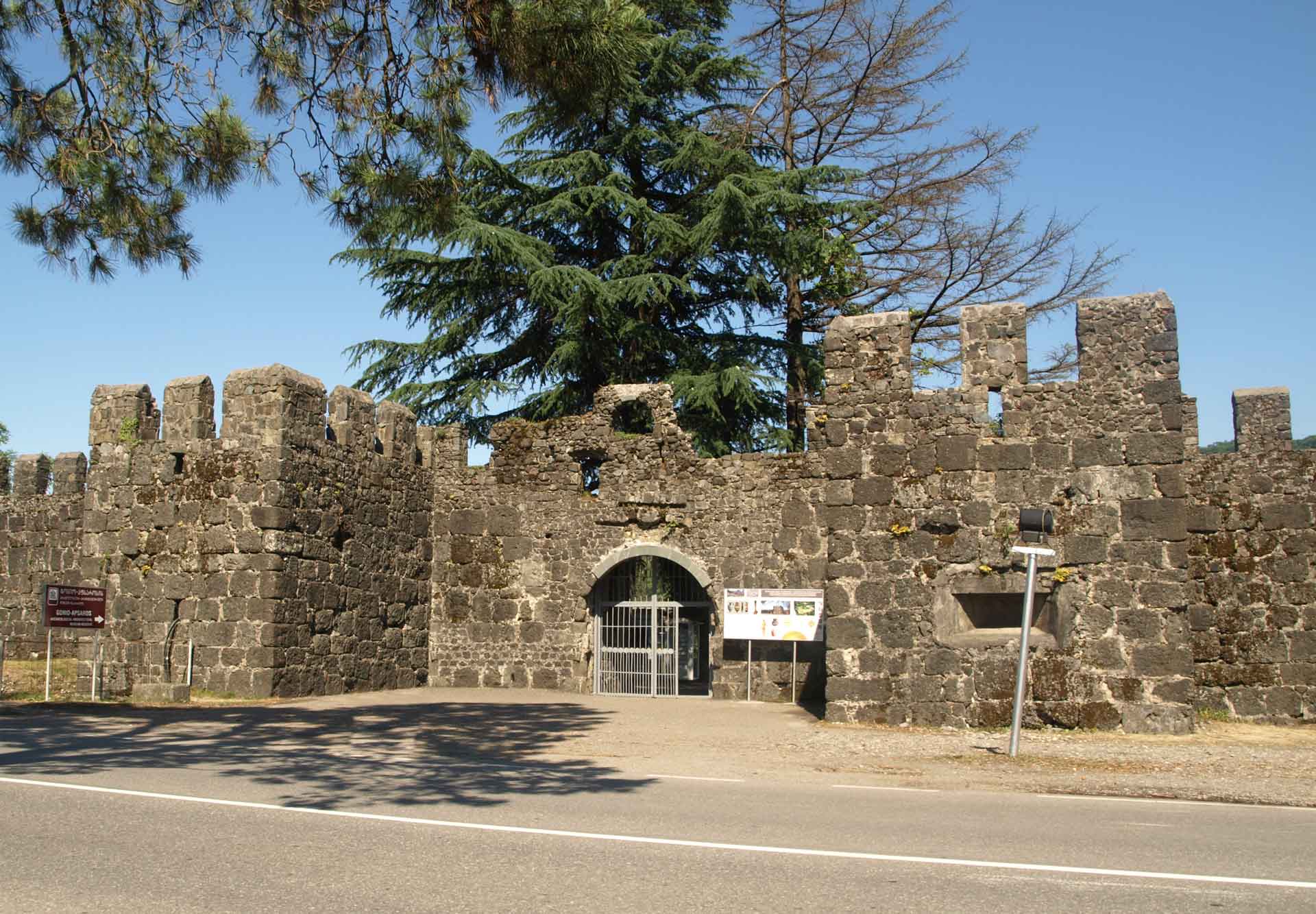 The main entrance to the fortress

Originally the fortress had four gateways: one on each side, set in the middle of the respective wall. The main entrance with its arched gate is on the west - i.e. facing the sea. In spite of later restorations, it has largely retained its original form. The other three entrances, which served as posterns, were walled up in the late Middle Ages. 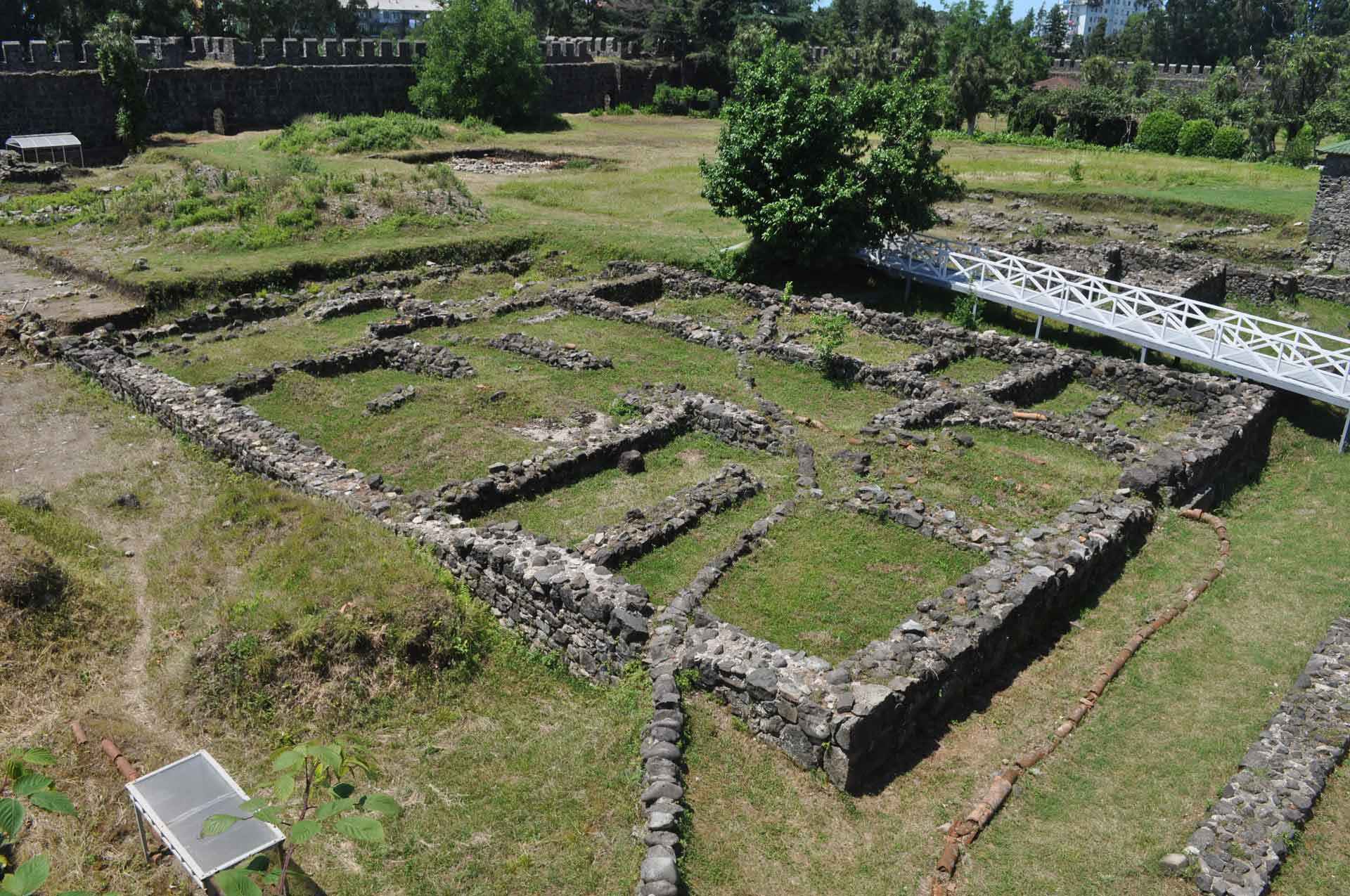 Excavated foundations of buildings in the fortress

In 132 AD, when the military commander Arrian visited Apsaros, it was a large castrum in which were stationed five cohorts, making it an exceptionally large garrison. Inside the fortress there were two main streets, via principalis and via praetoria, running perpendicular to each other with a central square located at their intersection. Archaeological excavations revealed a praetorium, barracks, bathhouses, a water cistern, and a system of water supply and drainage, all dating from the Roman period. It would appear that the majority of structures inside the enclosure were built of timber on stone foundations.

From the twelfth century, Apsaros was included within the unified Kingdom of Georgia. The toponym Gonio that came into use from the fourteenth century may derive from the name of the Italian city, Genoa, as Genoese merchants were actively engaged in trade in the region, and had even established a trading post at the site. 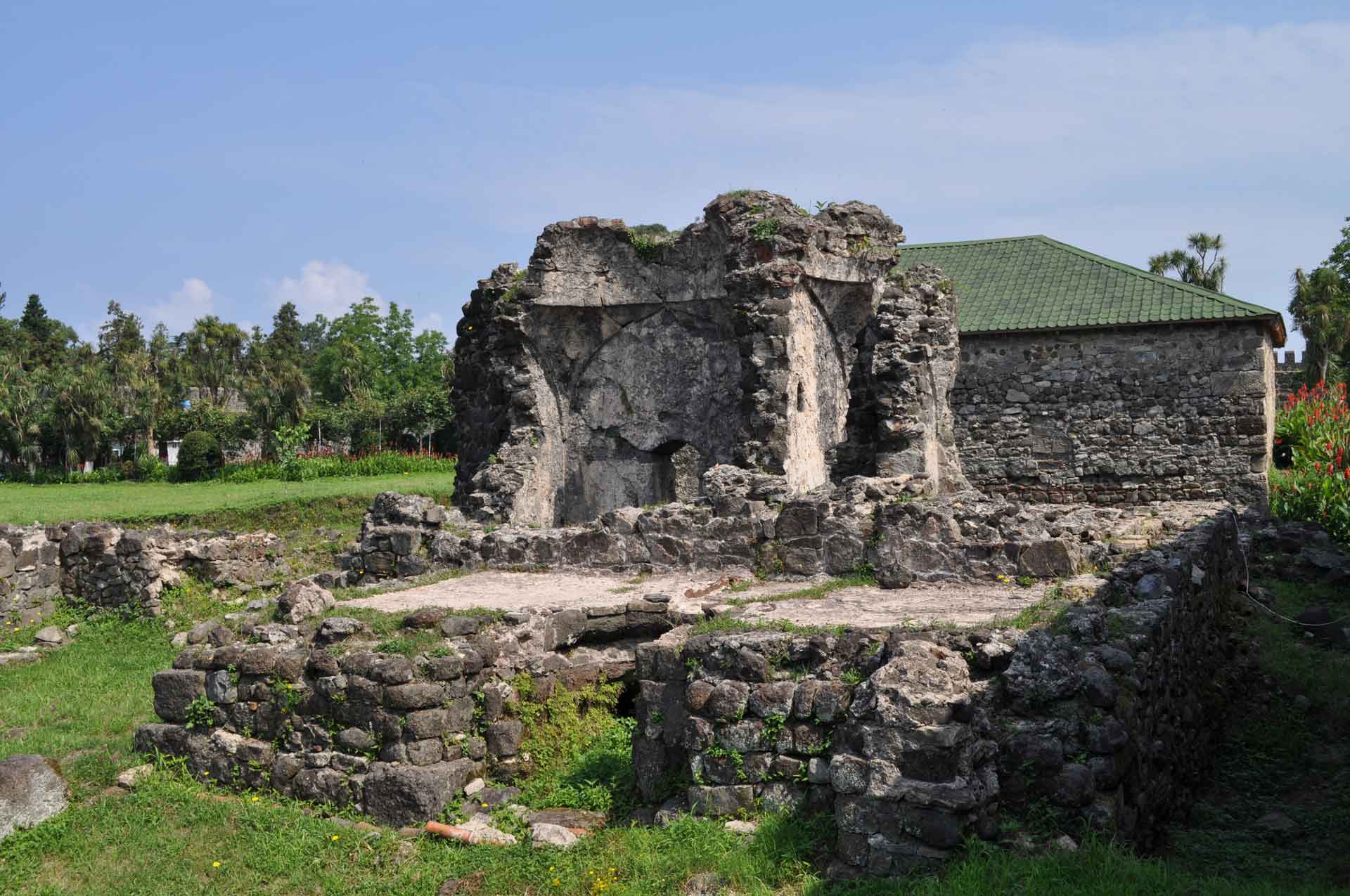 A Bath of the Ottoman period

In 1547, Gonio was captured by the Ottomans and remained under their rule for more than three centuries. The Ottomans restored damaged parts of the walls, repaired the rampart walk running around the walls, and also added merlons. In addition, they built several new structures inside the wall circuit, including a mosque and a bathhouse.

According to Georgian Orthodox Church tradition, the tomb of St Matthias (the apostle chosen to replace Judas Iscariot) is located in Gonio.