The rock-hewn town of Uplistsikhe, which is located in Shida Kartli region on the higher left bank of the Kura River near Gori, is one of Georgia’s most remarkable landmarks. It was an important urban centre during Antiquity and the Middle Ages. The name Uplistsikhe means “Fortress of God.” 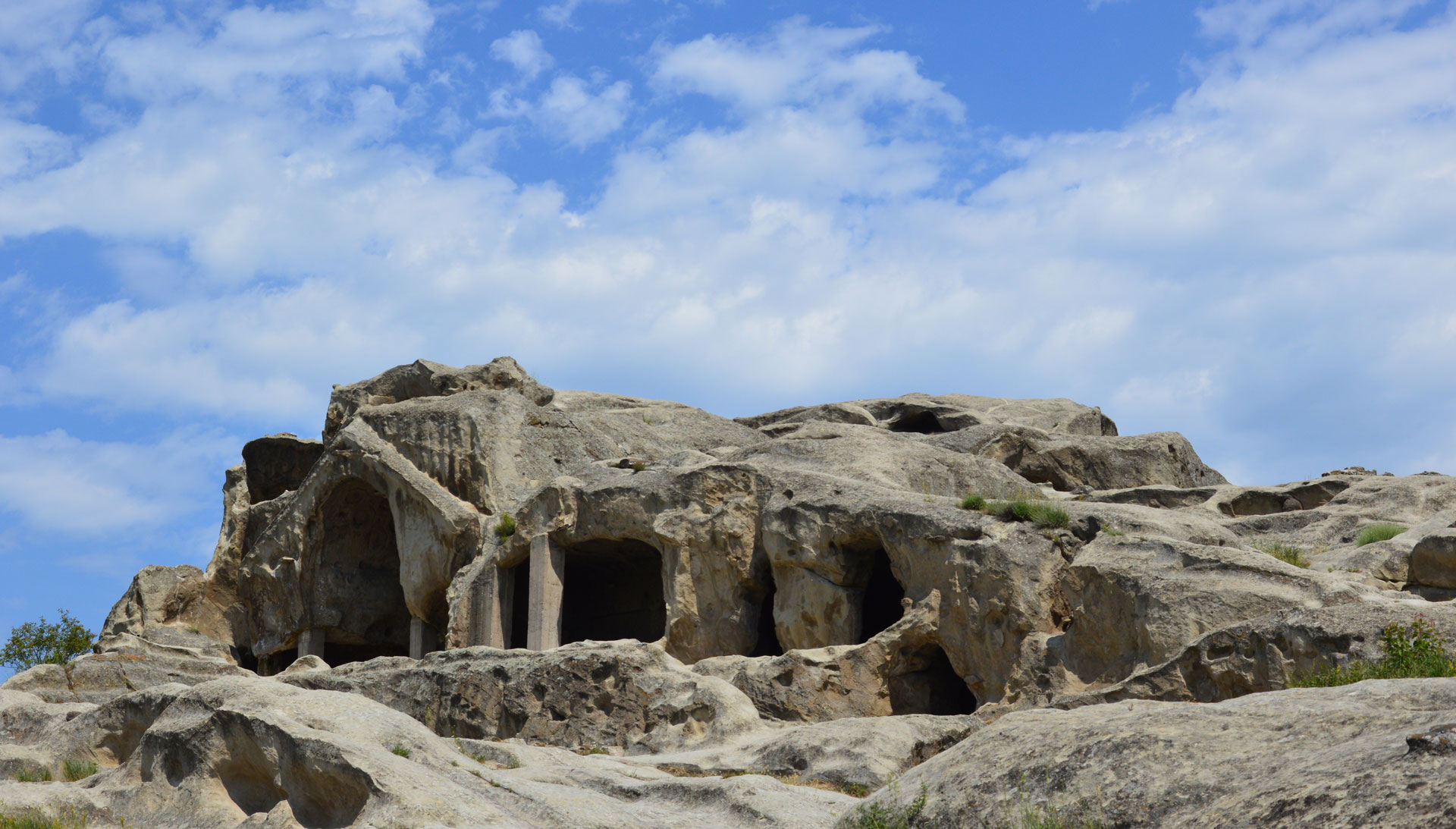 View of the rock hewn complex

According to Georgian chronicles, Uplistsikhe was founded in time immemorial by Uplos, who was the grandson of Kartlos – the eponymous ancestor of Georgians. The archaeologically documented history of Uplistsikhe begins in the Iron Age, but it saw its heyday in the late Hellenistic period (first and second centuries AD) when it acquired all the necessary attributes of a city: a road network, defensive walls and towers, a moat, a tunnel leading to the river, a water supply and drainage system, etc. 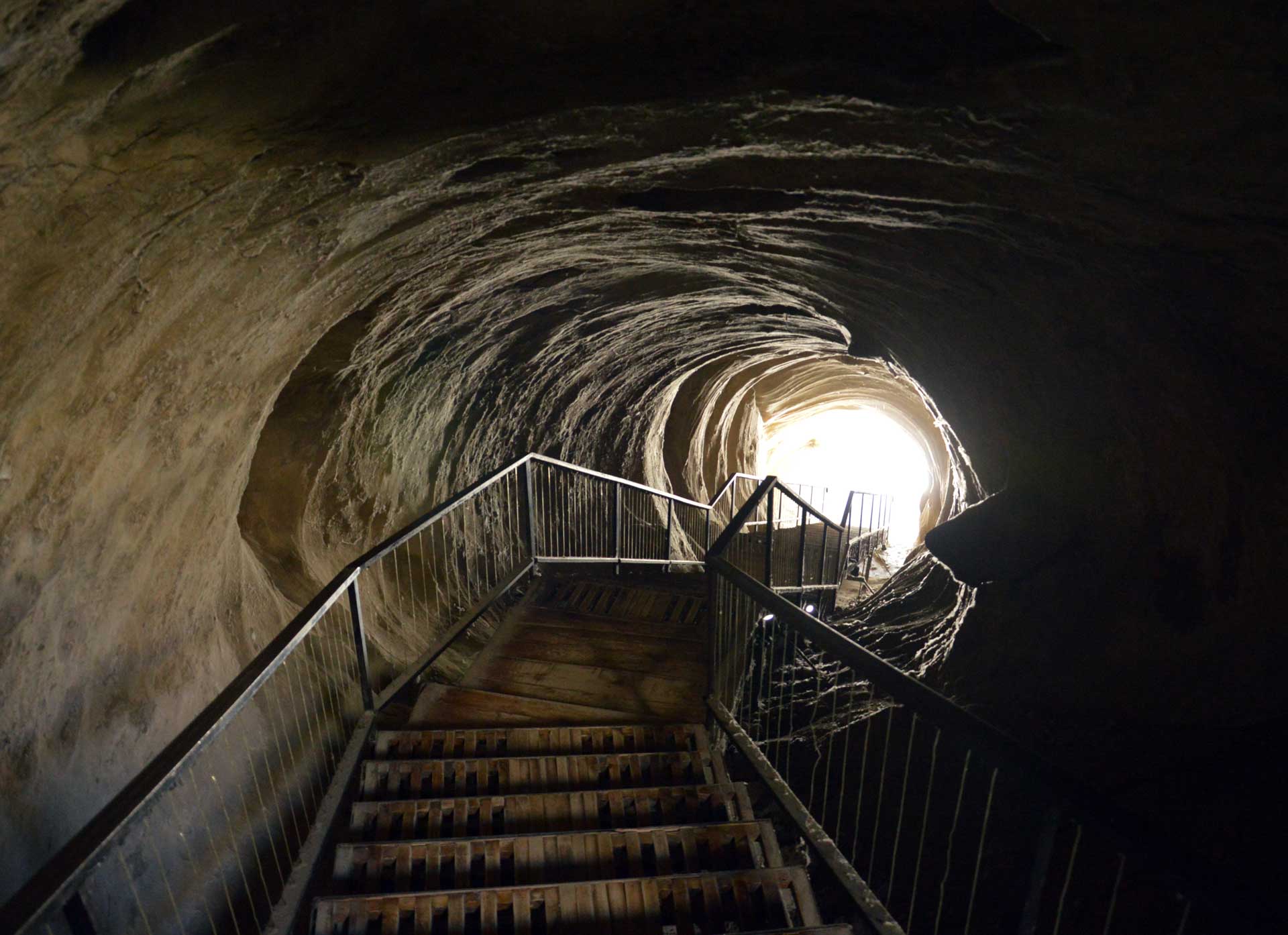 Tunnel leading to the river

Uplistsikhe is a large complex of natural and artificial caves, as well as man-made structures. It is composed of southern (lower), middle and northern (upper) sections. The middle section is the largest and the most important, since the main structures of the city are concentrated here. They are distinguished for their geometric precision and high-quality decoration. 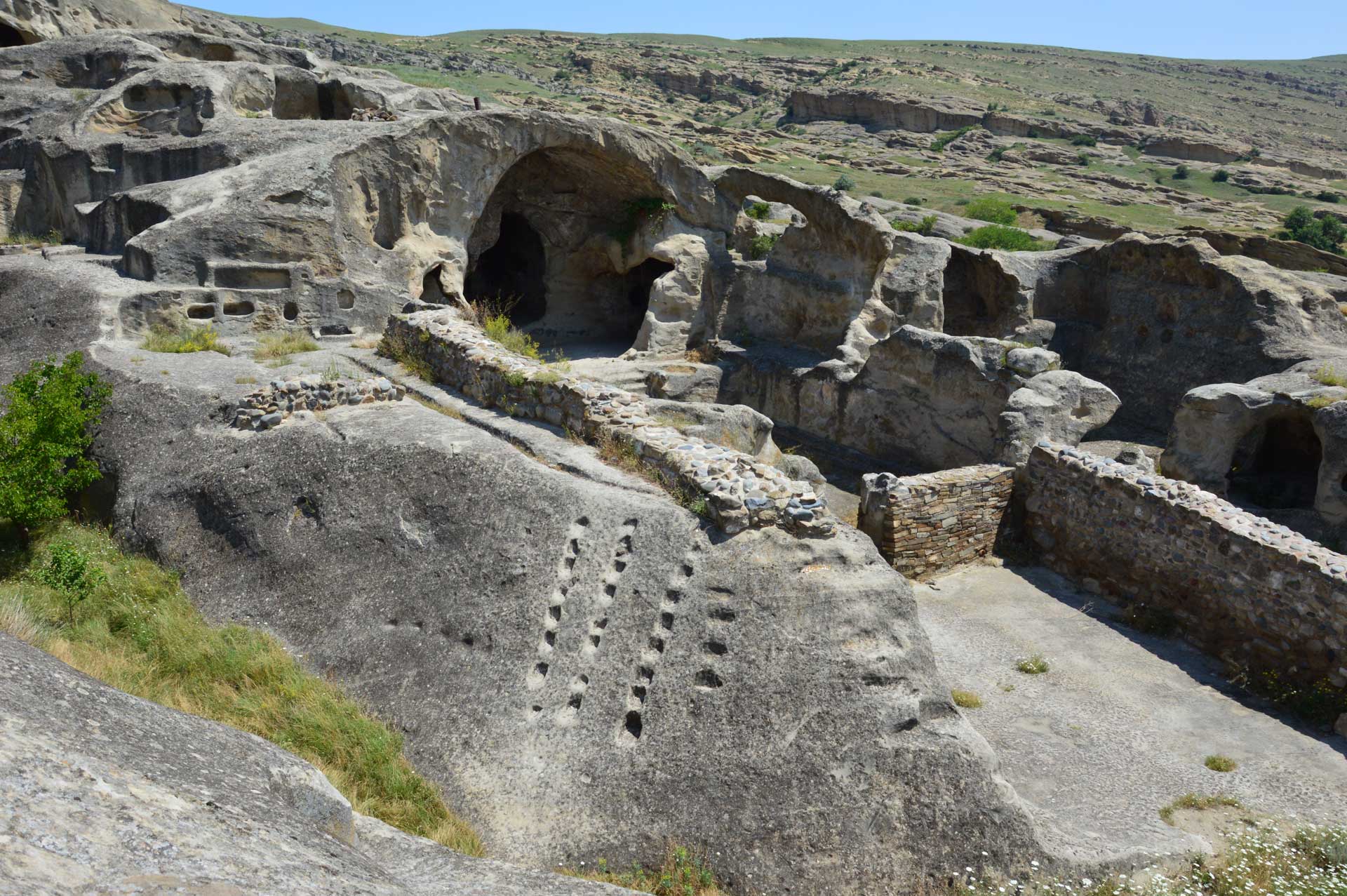 View of the middle part of the town

The main gate of the town is located in the south-east corner of the middle section. A long, rock-cut road leads from the gate to the quarters of the town. 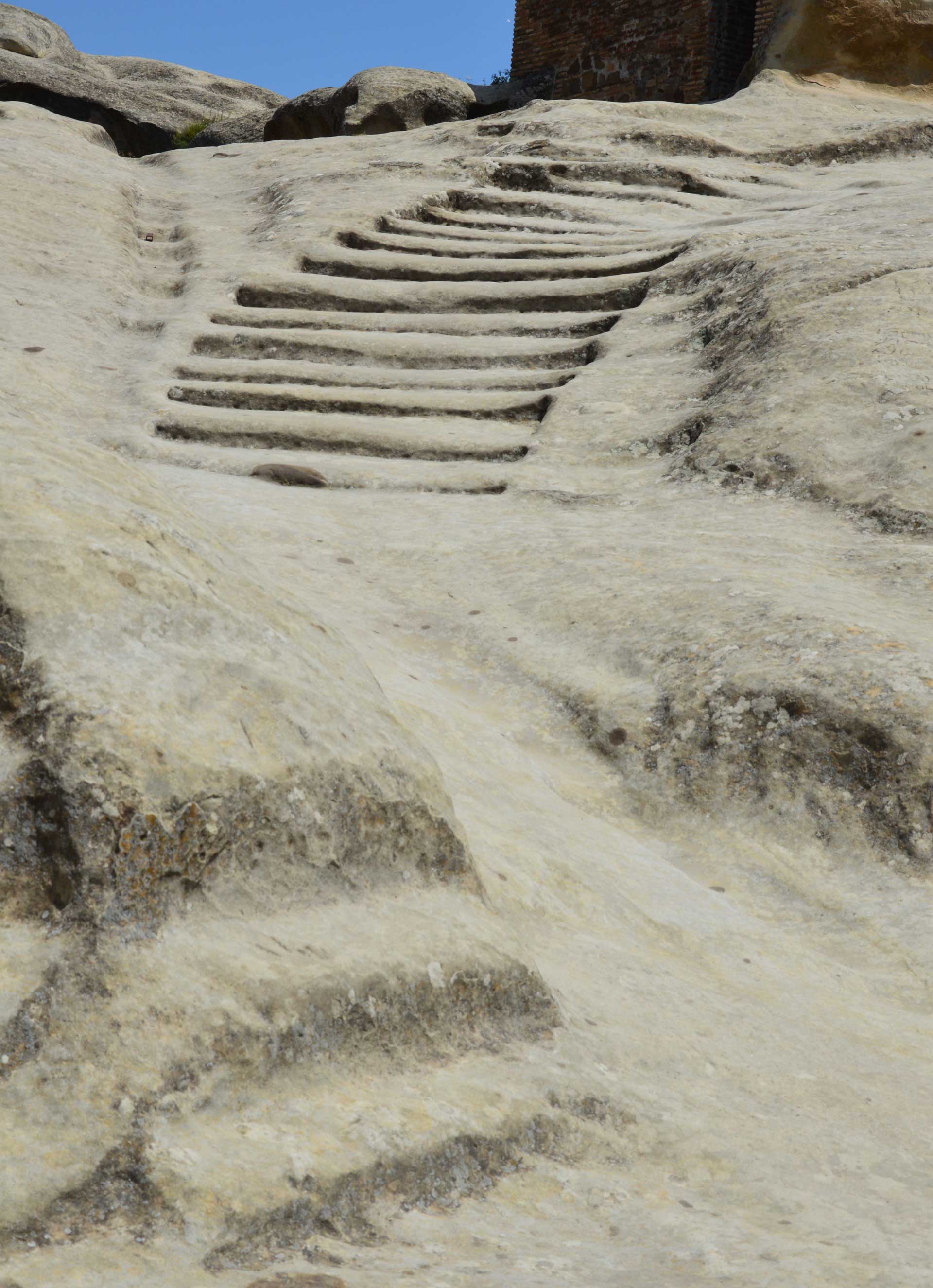 Main road with a rock-cut staircase

Most of the cave structures are compositionally similar, comprising a courtyard and an inner space. The latter consists of a principal room, sometimes adjoined with one or more smaller chambers. They possess flat ceilings that are decorated with rock-hewn imitations of timber roofing. 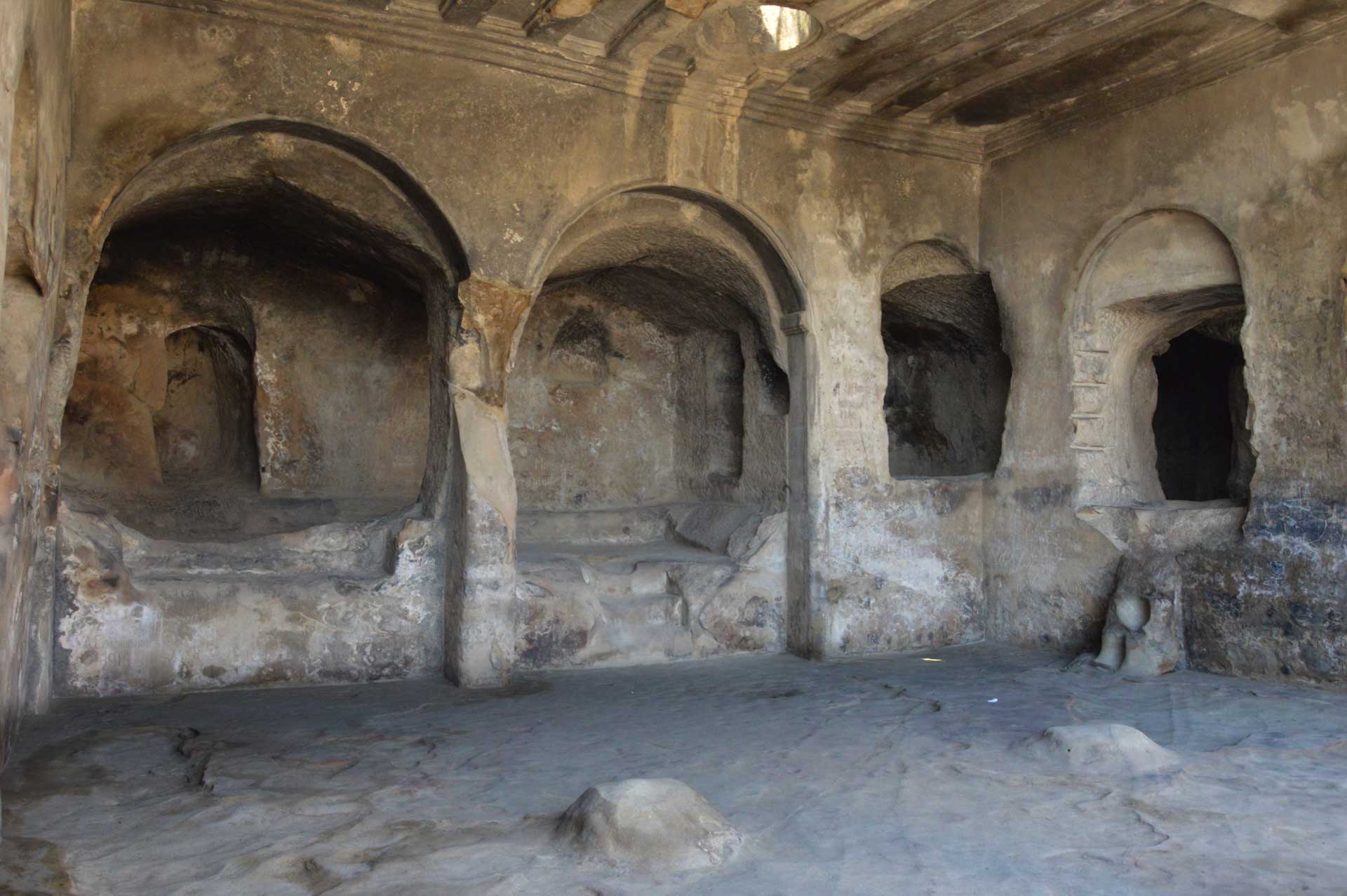 There are also structures that demonstrate more sophisticated architectural design. The hall of the so-called Central Complex has a rock-hewn barrel-vault with coffers. Several large caves feature one, two or four columns in their interiors. A group of caves called Makvlovani has been identified as a former pagan temple. 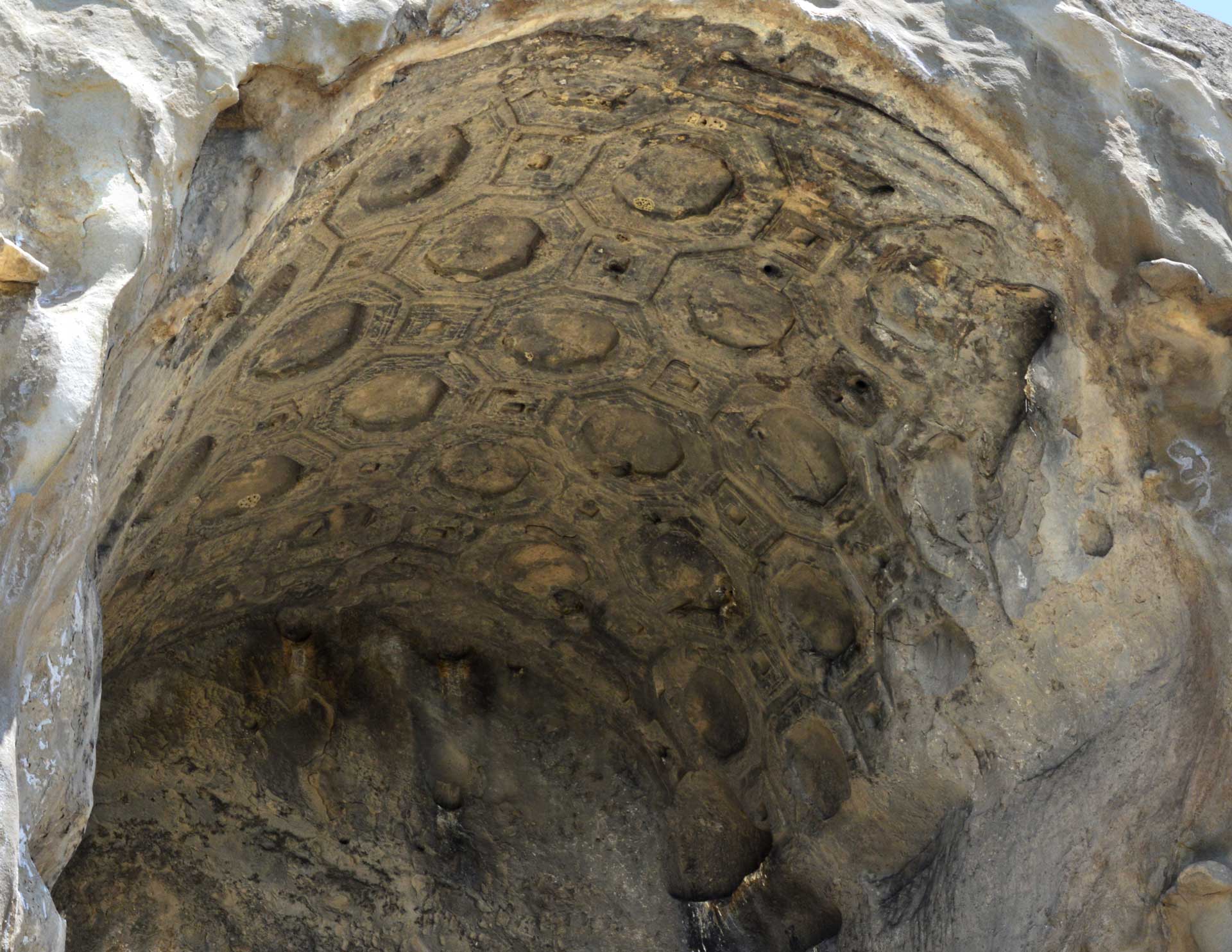 Hall with a rock-hewn coffered barrel-vault

In the early Middle Ages, a church was constructed in the middle section of the town, presumably on the site of a destroyed pagan shrine. It is a single-nave brick structure with annexes from the west, north, and south. The church was restored several times. 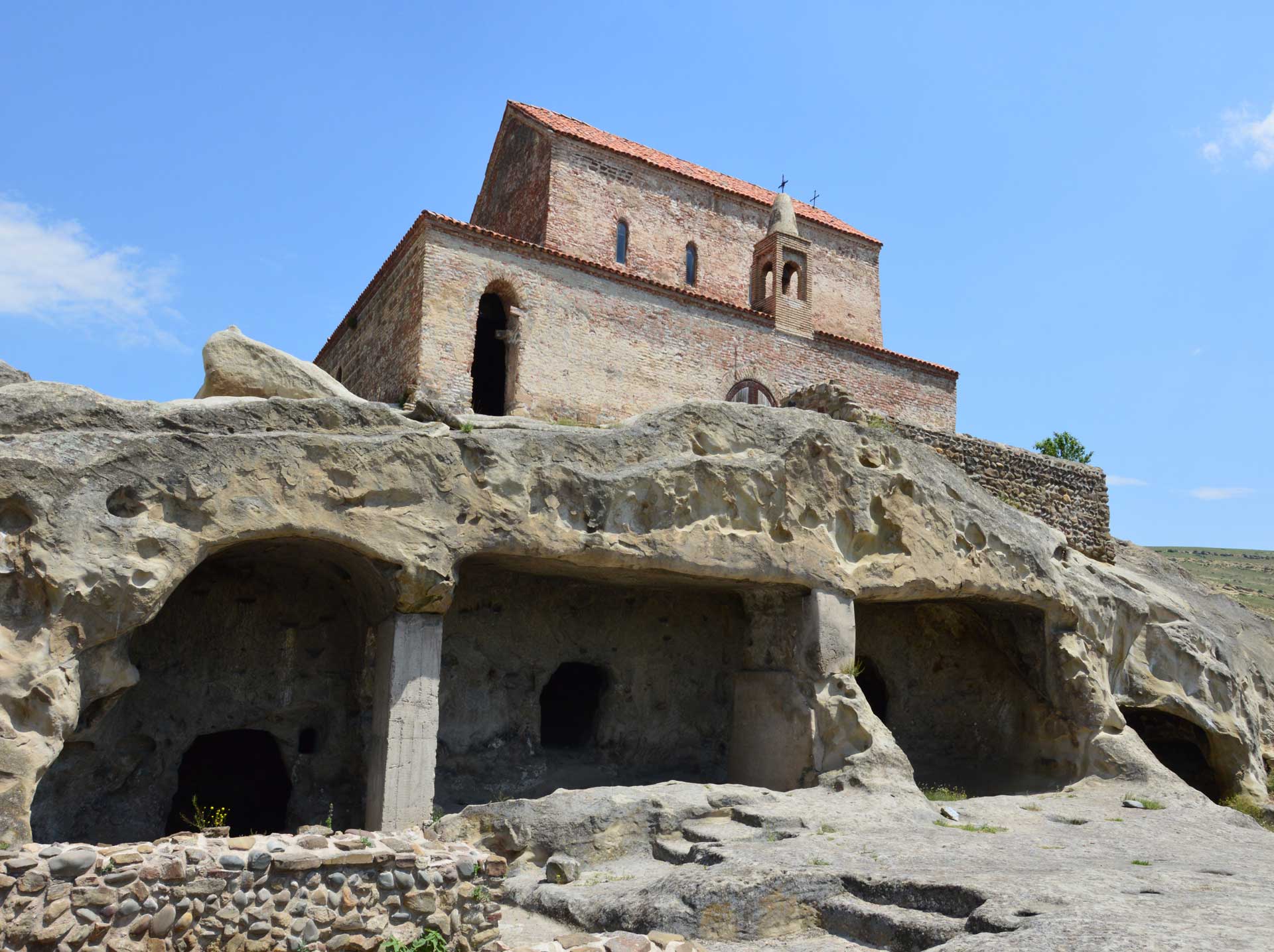 Uplistsikhe retained its importance until the period of the united Georgian Kingdom. It served as a principal Georgian stronghold in the Shida Kartli region during the Arab conquest of Tbilisi from the seventh to the eleventh century. The town was abandoned after Tamerlane’s invasions of Georgia in the early fifteenth century, but during turbulent periods was occasionally used by locals as a temporary shelter. The eighteenth-century historian Prince Vakhushti Bagrationi described Uplistsikhe as a ‘dilapidated town.’