Sergei Parajanov (1924 - 1990) is considered as one of the 20th century's greatest masters of cinema. His free cinematic forms, expressive power and originality of visual compositions still continue to impress filmmakers today.

Shooting of the short film "Arabesques on the Pirosmani Theme" with the artist Alexander Janshiev, a close relative of Parajanov, in the role of Pirosmani. 1985

Photo taken during the filming of "The Legend of Suram Fortress". 1983

A Kurdish neighbor was patiently holding a rumpled bed sheet, which served as a background. 1988

Parajanov with his beloved hat. 1988

Parajanov with a Kurdish boy in his home. 1981

Parajanov poses with a rug or so-called Mafrash. 1980

Parajanov portrayed with his neighbor, friend and the main character of his future film "Ashik Kerib. "Yura Mgoyan. 1986

Parajanov pictured with his favorite well-mounted artwork "the dancing Kurds", which he dedicated to his Kurdish neighbors. 1981

Parajanov in David Gareja, filming "The Legend of Suram Fortress". 1983

Parajanov holding a mannequin in front of the entrance to "Georgian Film Studios". 1988 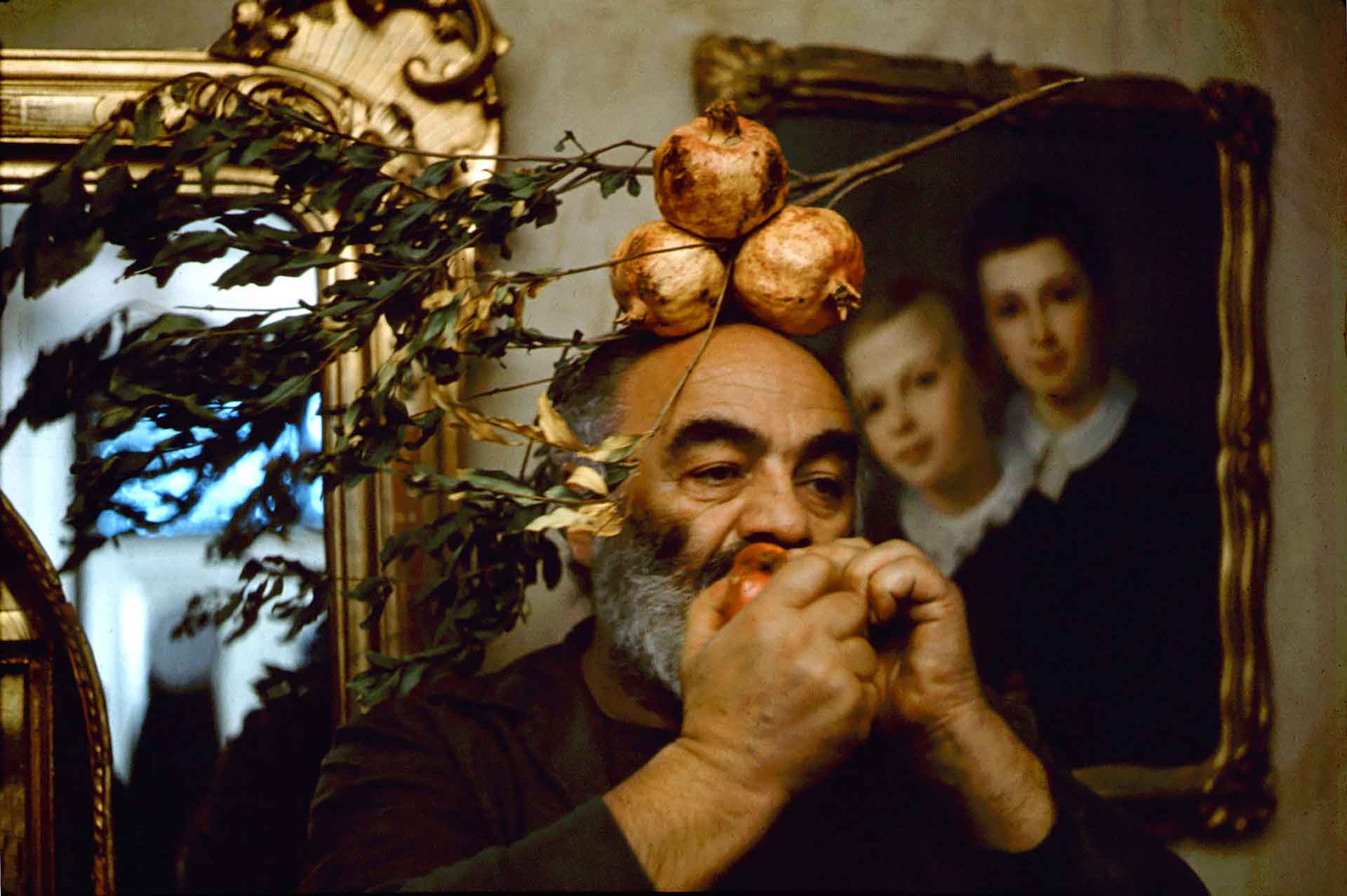 The exact date of this photograph is unknown; it was probably taken in fall 1981. Parajanov with a pomegranate branch on his head, sucking out the juice of a pomegranate – exactly the way monks did in his film "The Color of Pomegranates"

Working on the set of "The Legend of Suram Fortress". David Gareja. 1983 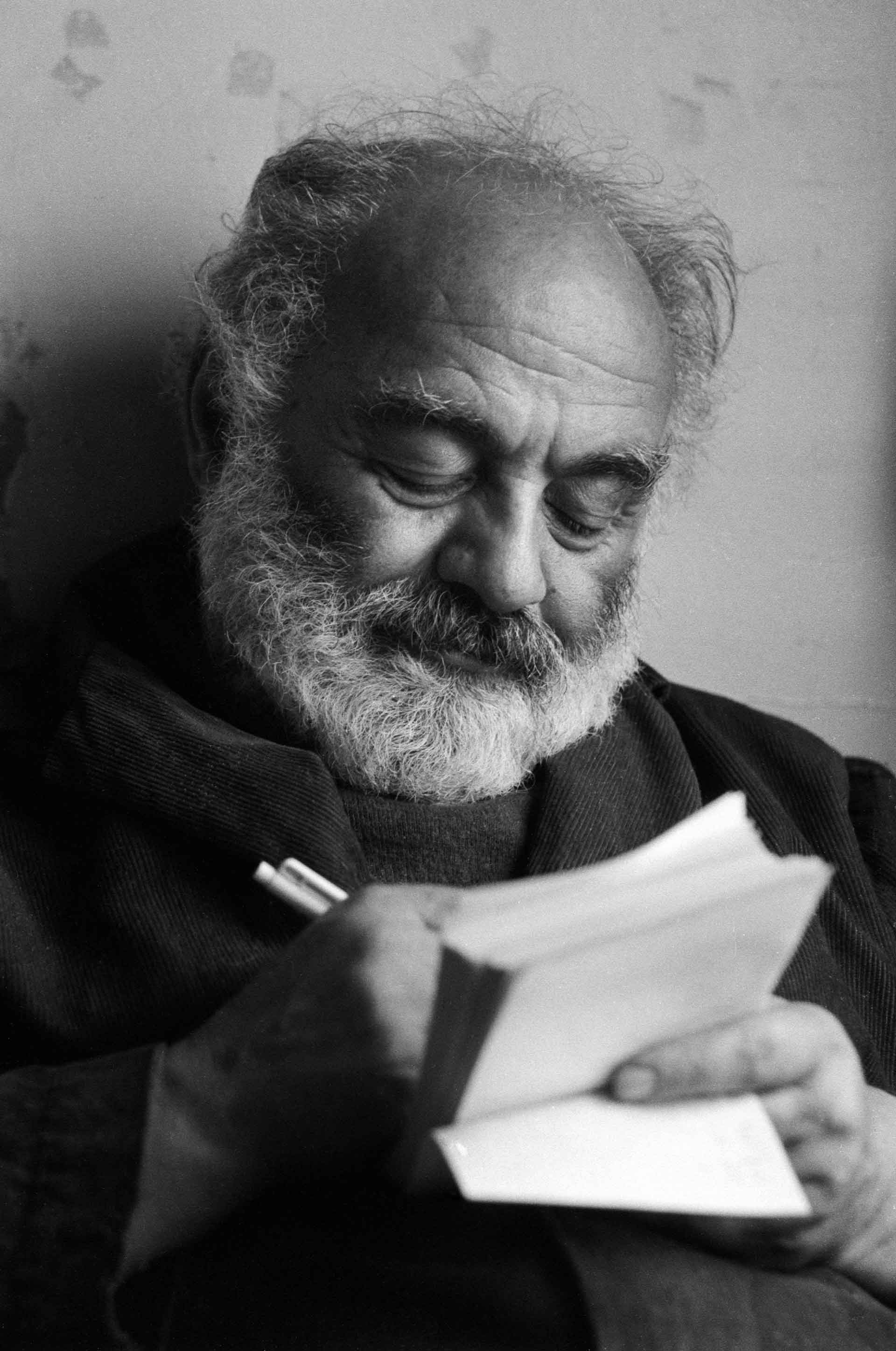 Sergey Parajanov posing against the background of a magnificent painting of Sheki Khan’s Palace. 1983 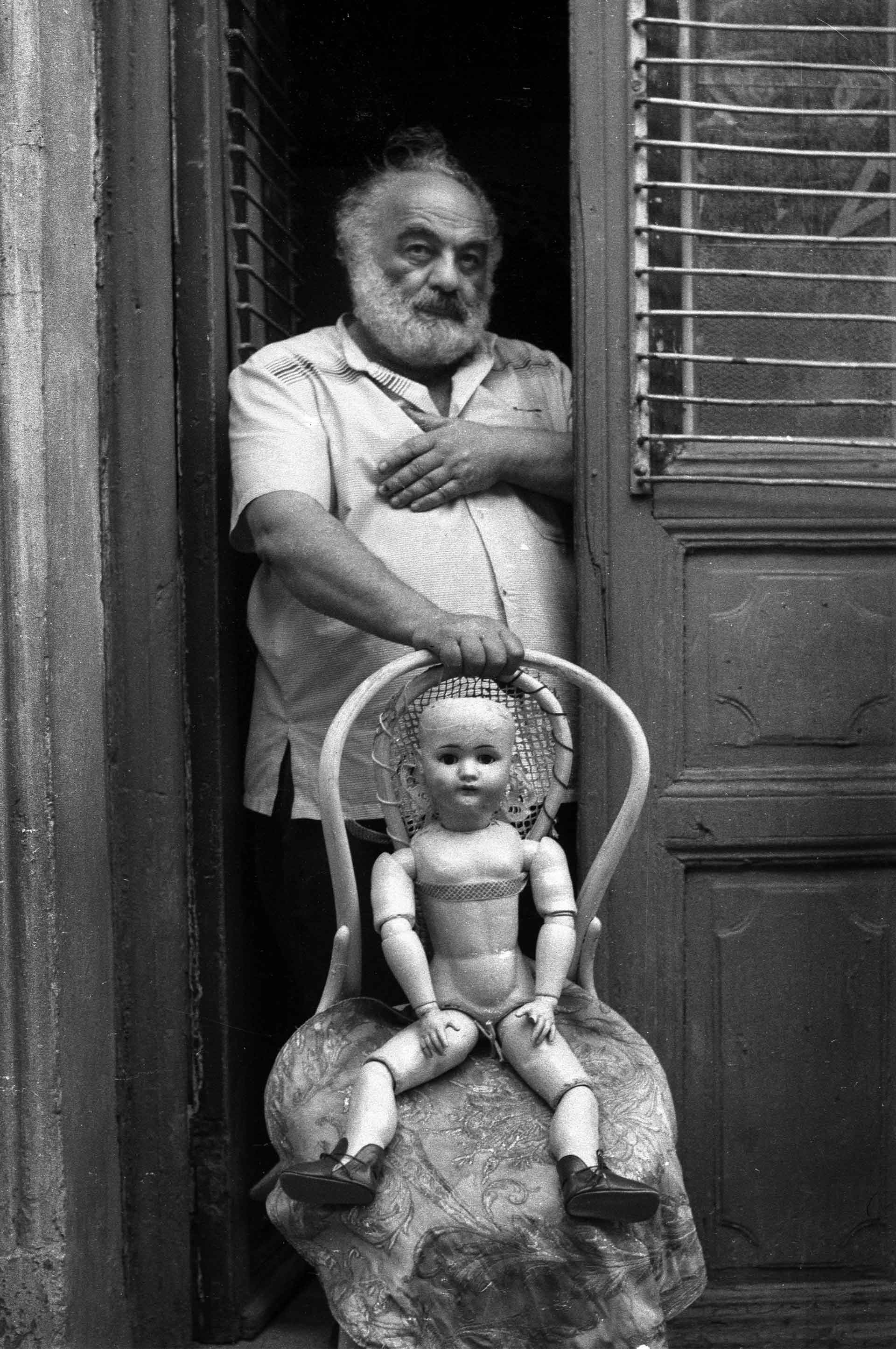 Portrait of Parajanov with a doll on a Vienna chair at the entrance to his home. 1986 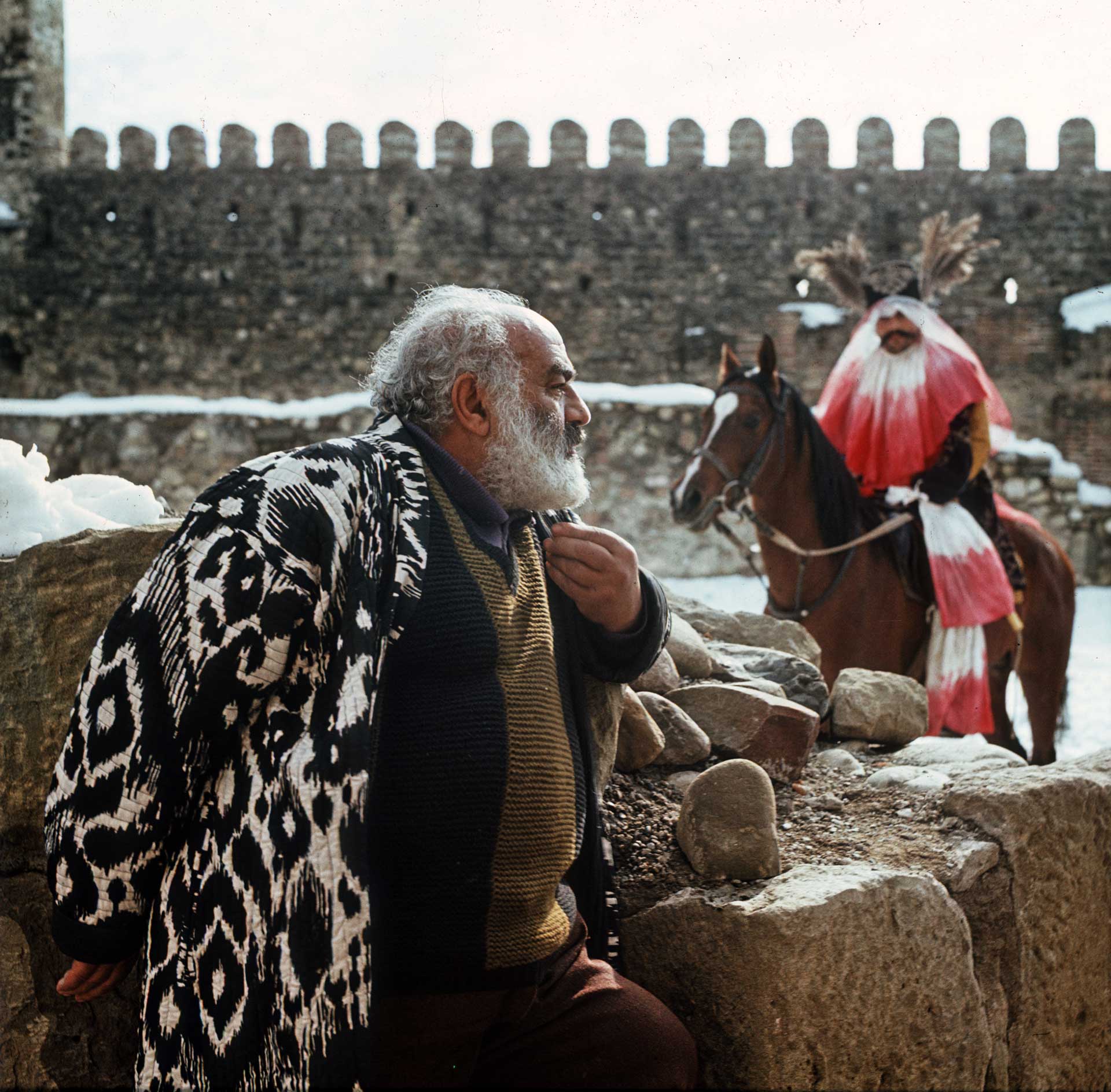 Parajanov with his favorite horseman Tamaz Danelia in the Kakhetian village of Ninotsminda during the shooting of his last film "Ashik Kerib". 1988 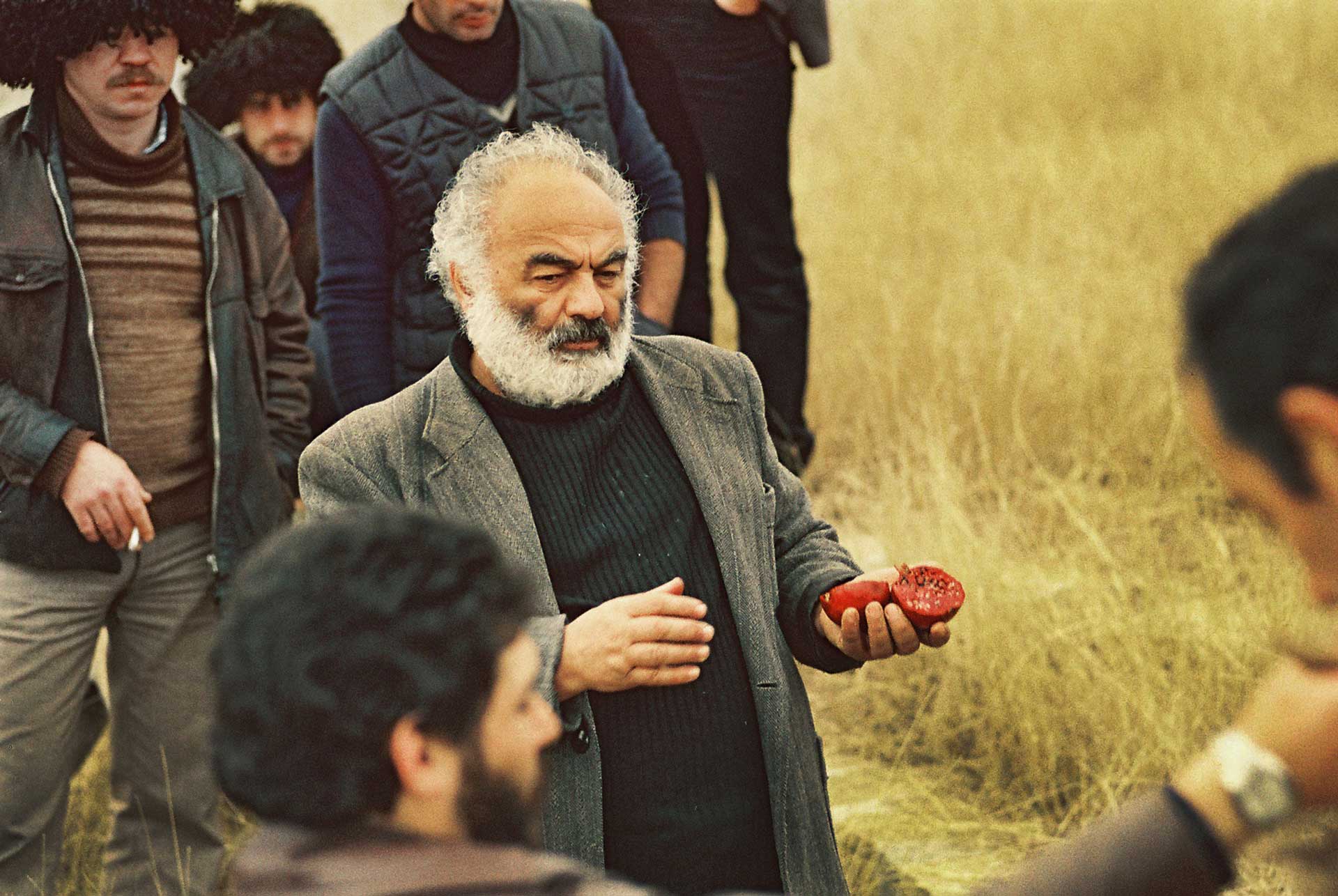 Filming on the set of "The Legend of Suram Fortress". 1983

Filming on the set of "The Legend of Suram Fortress". 1983

PORTRAITS OF ARTISTS BY GURAM TSIBAKHASHVILI