Zurab Nizharadze was a representative of the new wave of artists who, alongside the official art of the Soviet Union, ensured the emergence and development of new flow in fine art after World War II. Following the end of Stalin’s epoch, the window to Europe that was slightly opened gave Zurab Nizharadze the opportunity to learn about western art from literature found in the library of the Academy of Sciences, where the artist became acquainted with the history of European painting. As a result of his love of Picasso and his passion for painting, he was given the nickname "Pico". This is what people called him right up to the end of his life. While studying at the Academy of Arts, his teachers (Sergo Kobuladze, Korneli Sanadze, and Apollon Kutateladze) greatly contributed to the development of his technical skills, the formation of his artistic taste, and the scope of his interests. 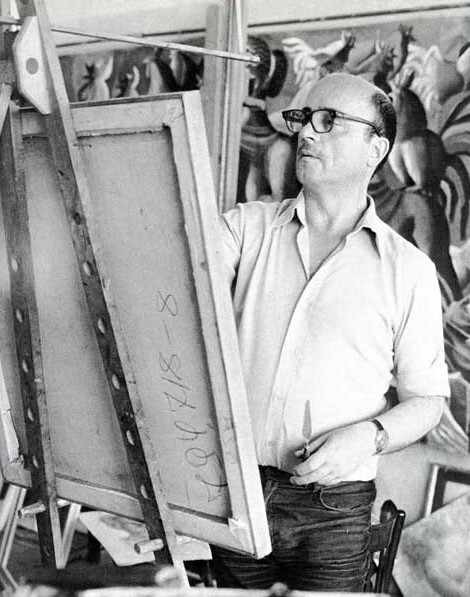 From the very outset, Zurab Nizharadze's versatile skill was fully revealed in the genre of portraiture. The protagonists of his works were his friends and contemporaries, and the generation of young Georgians of the 1950s and 1960s who established a new national culture and laid the foundation for radical changes in Georgian fine arts, literature, and cinematography. The expressiveness of his exquisite language and clear style can be observed in the portraits he painted of Otar Chiladze, Nana Khatiskatsi, Manana Kordzaia, Vakhushti Kotetishvili, Liudmila Babkova, Tsitsino Tsitsishvili, and Otar Ioseliani. His emphasis on each figure’s face and gaze, the sculptural molding of volumes with robust, rich spots of color, and the shimmering hues lend these portraits a unique plastic integrity. Color is the artist's primary means of conveying the compositional arrangement or the psychological description of the individual characters. His use of color impacts the overall tone of the portrait, which may be dramatic, symbolic, or lyrical in order to produce the artistic image. In the 1980s, more poetic, emotionally-charged portraits that were based on tonal painting replaced the contrastive, more dramatic portraits of the 1960s (the portraits of Gayane Takaishvili and M. Sarishvili, for instance). Here, the form is created through the use of nuanced, subtle gradations rather than the collision of contrasting colors. At times, the juxtaposition of realistically molded faces with conventionally depicted bodies results in works of outstanding expressiveness (for example, the portrait of Anna Nizharadze). The fascinating depiction of Lela Pataridze is reminiscent of a Fayum portrait. The artist achieves particular mastery in his graphic portraits made using pencil and pastel. The psychologism of the face and skill of execution, mastery of the painting's secret, and the feeling of plastic volume all demonstrate the artist's high level of professionalism.

Zurab Nizharadze's creative creed is even evident in his early paintings. In the new Georgian fine art, he is a representative of poetic realism. By poeticizing his daily activities, he avoids the routine of everyday life and seeks to discover the model of a harmonious world in a reality full of contradictory events. The painter believes that an artist creates a model of a harmonious world that is expressive and diverse, thus revealing the artist's standpoint on how the world is arranged.

In 1961, Nizharadze created a large-scale painting depicting a young man and a lady planting a tree sapling. At that time, the strategy of ideologizing art was still gaining strength throughout the territory of the Soviet Union, including Georgia.

At first glance, "planting a tree" appears to show the common social realist theme of the “glorification of work”, but it has been approached in a completely different way. The picture is devoid of any ideology or labor pathos. It is a poetic, lyrical picture depicting young people’s strong and energetic faith in the future. The pictures "Miners" and "Tractor Drivers" were executed with precisely the same pathos: a new insight into the topic, and, accordingly, the use of completely different artistic techniques.

The nude – a woman’s naked body – is one of the most potent sources of inspiration for artists in all eras of art development, since it serves as an archetypal symbol of the beginning, birth, fertility, purity, and desire.  Zurab Nizharadze is no exception. In the 1970s and 1980s, the artist often approached the topic of the nude with a different concept, taking into consideration the ancient-mythological, biblical or living environment, and combining them into a pictorial and graphic series. Nizharadze's Nude is a sensitive and emotional artistic image, often possessing an ironic subtext. The pictorial-plastic form is expressed through generalized volumes and conditional, slightly distorted masses. They are displayed as pure, emotionally charged, lyrical images. These paintings have a unique sensuality owing to the angles of the figures, the textural depth of the paint layers, and the sensitivity of the forms achieved through contrasting or tonal painting gradations. Whether the artist paints the Nude or a female figure in everyday life, as he calls them "humorous scenes", the sensuality and aestheticism of the female body is always emphasized. Aside from aestheticism in general, the harmony of the combination of shapes and colors is the main characteristic feature of Nizharadze's work, and corresponds to the lyrical character of his painting. Zurab Nizharadze's work lays strong emphasis on genre themes. The artist combines the real and the fantastic so naturally that even the viewer accepts the reality of his dream world. In "Bird Seller", a moment that appears ordinary is poeticized and made appealing in its naivety. The synthesis of various spatial and temporal orientations, and the use of strong colors position this seemingly ordinary scene on the verge of reality and fantasy. Through employing certain plot motifs and color solutions, the artist achieves a specific emotionality, thus asserting the idea of the inevitable victory of kindness. The artist's Italian Cycle is executed with light irony and bright, sonorous colors.

In the 1970s and 1980s, the artist created a mythological cycle. His attitude towards mythology was quite different: using myths not as a source of wisdom, but offering us amusing, ironic, and original versions. It might be Judith holding a mask decorated with colorful ribbons instead of Holofernes' head, or Danae turning her face away from the glaring, golden rain. Both compositions include open, wide brush strokes and the harmonious interaction of colors. The character of the Centaur is rather different – its untamed, wild nature is emphasized by its rapid, arrow-like movement. The dramatic expression and contrast of the artistic image are accentuated by juxtaposing opposing hues and impasto textures.

Zurab Nizharadze always returned to familiar motifs and themes in search of new solutions, but he always maintained his unique hallmarks - aestheticism and artistry.