THE SIONI CHURCH AT ATENI

Ateni is located in Shida Kartli province, 15 km from the town of Gori. The church known as Sioni (i. e. Zion) stands on a giant artificial platform constructed atop a cliff at a bend in the Tana River gorge. 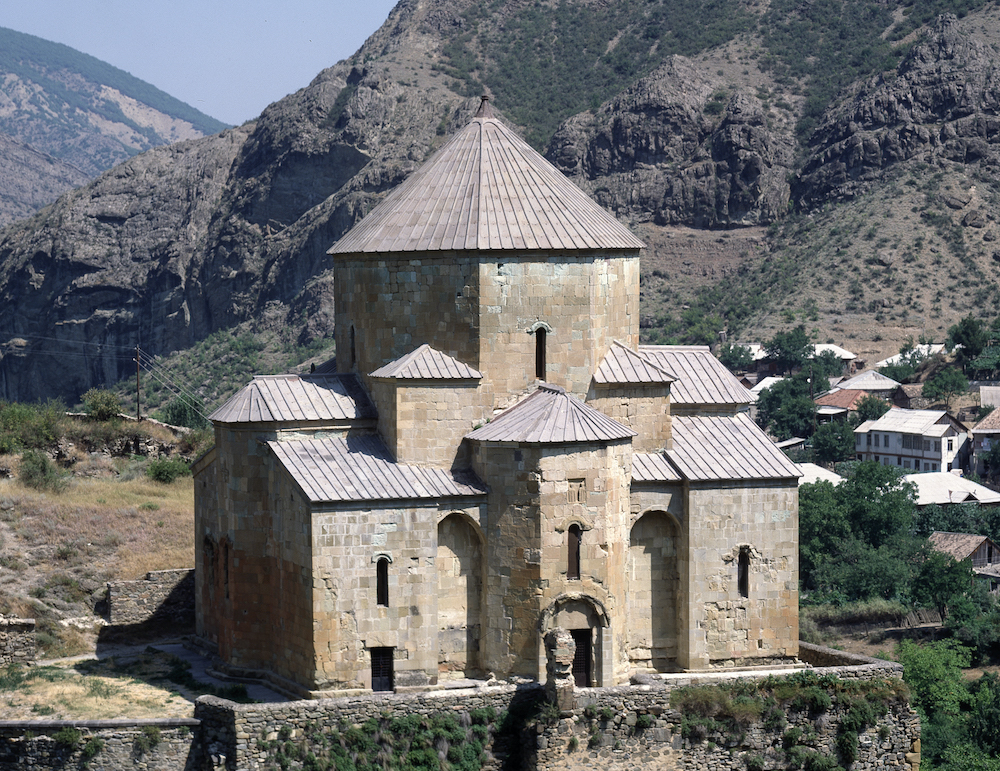 Sioni Church at Ateni from the south

The first church was constructed at the site as early as the fifth century. Archaeological studies have revealed that it must have been a large basilica. The majority of the substructure was also built during that period. The preserved details of the fifth-century Sioni Church include marble architectural fragments and a tympanum stone bearing an image of two stags, which was reused above the northern door in the extant church. 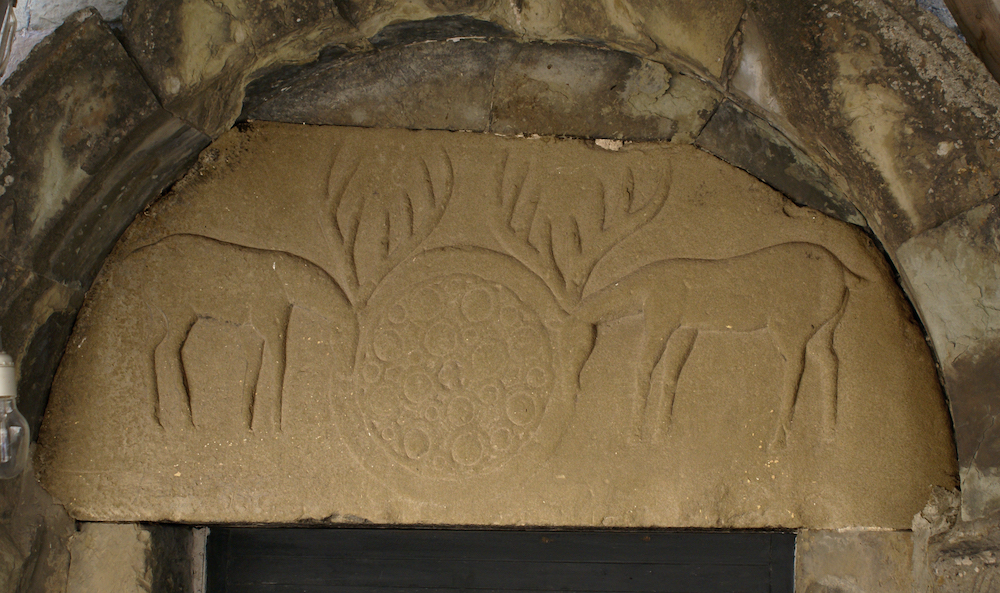 Sculptural relief of two stags above the northern door

In the seventh century, a new Sioni church was erected at Ateni on the site of the earlier one. It was designed as a copy of Jvari Church (the Church of the Holy Cross) at Mtskheta. The architect has carefully imitated the model in its plan, elevation and the articulation of its façades. Similar to Jvari, Sioni is a tetraconch: i. e. a domed building with four apses arranged in the cardinal directions. Between the apses there are additional chambers in all four corners, which communicate with the central space by means of ¾ circular niches. Transition from the square central bay up to the octagonal drum and further to the circle of the dome is effected through three stages of squinches. 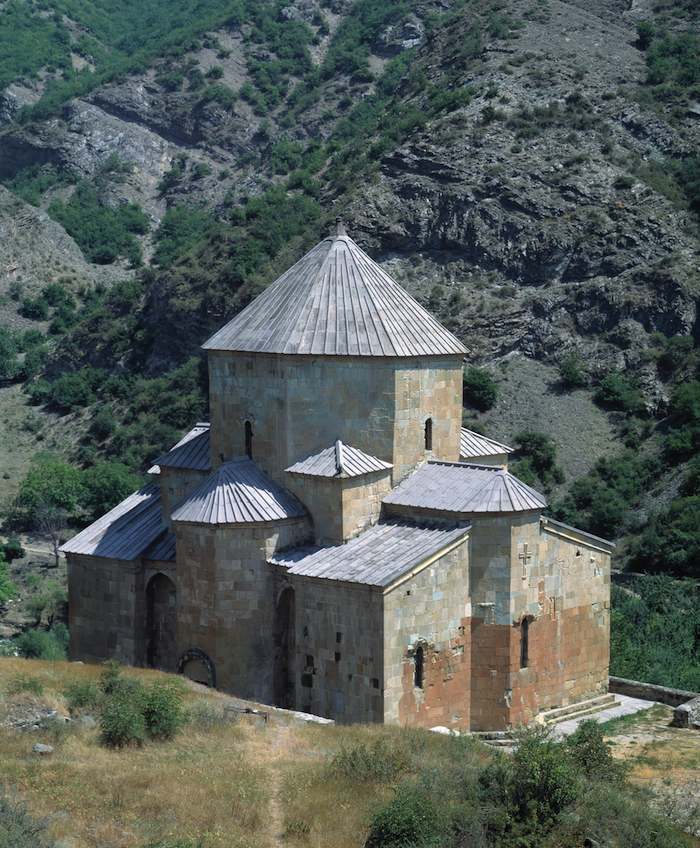 Sioni Church from the north-west

Apparently, by the tenth century Sioni had been badly damaged, and was restored in the 980s by a crew of Armenian masons. An inscription made on the southern façade mentions the name of the masonry crew foreman – Thodosak. The restored walls are faced with grayish-yellow sandstone blocks, while the original facing is made of reddish ashlar stone. 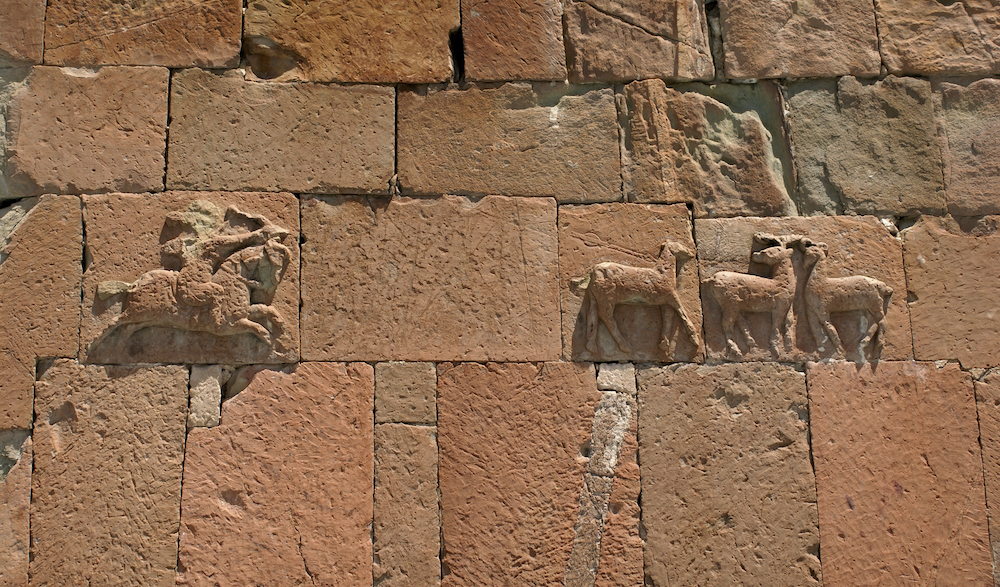 Hunting scene on the western façade

The exterior walls of the Sioni Church are amply adorned with sculptures, most of which were made during the restoration in the tenth century, including representations of the donors on the eastern façade. Among the few seventh-century sculptures which have been preserved, a hunting scene on the western wall is distinguished for its outstanding iconography. 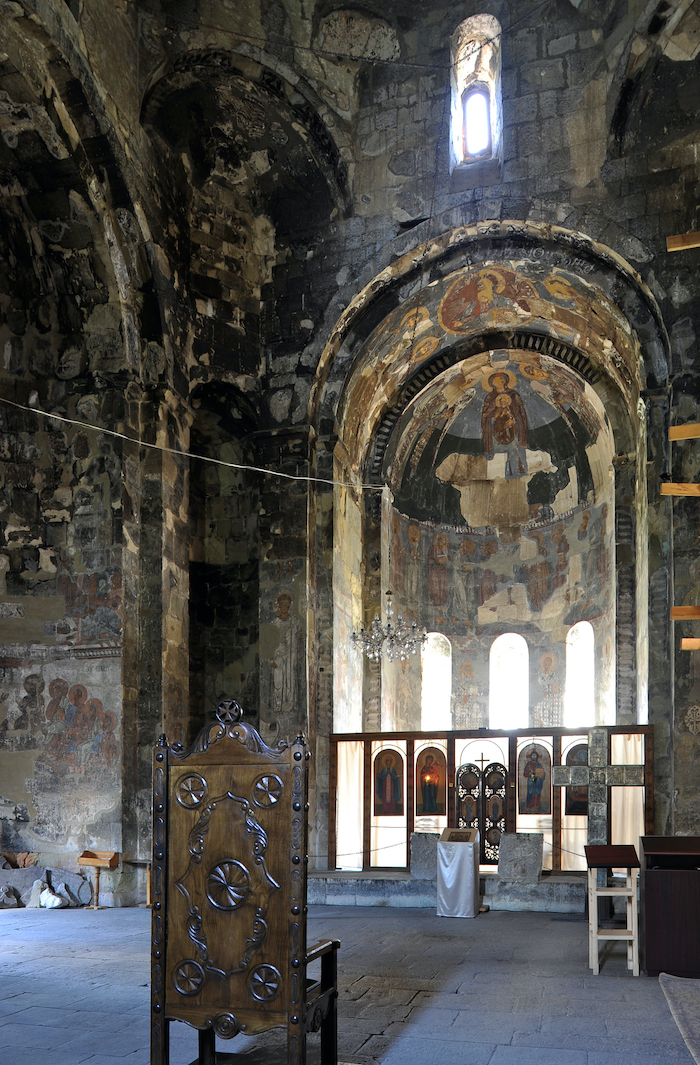 The wall paintings of Ateni dating from the 1090s are one of the finest examples of Medieval Georgian art owing to their exceptional artistic quality. Largely intact murals still cover the whole interior. The main, eastern apse bears a depiction of the Virgin and Child between archangels in the conch, located above two rows of the apostles and church fathers. The northern and southern apses contain cycles of the lives of Christ and the Virgin respectively. The western apse is taken up with a large depiction of the Last Judgment placed above a row of saints and prophets. Images of the seven church donors are also included in this row. Personifications of the four Rivers of Paradise are located in the squinches. A relief cross carved in the dome ceiling overlooks the whole interior. 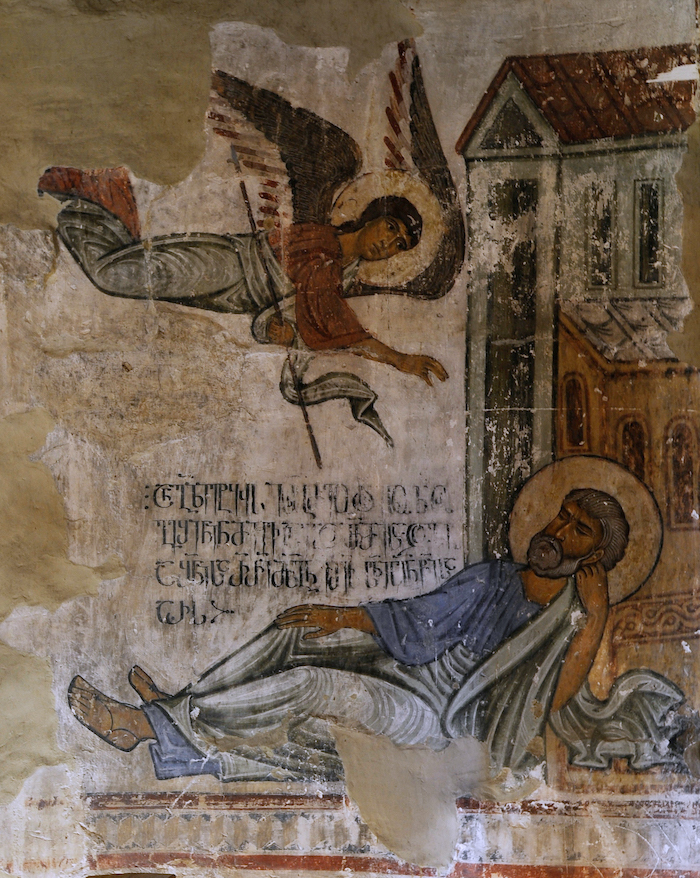 Sioni was a pilgrimage church. Its walls have preserved hundreds of inscriptions that were made by pilgrims from the eighth to the eighteenth centuries.