Irakli Parjiani: Variations on the Theme of Annunciation

Irakli Parjiani’s oeuvre is all about attempting to decode the inscrutable. This is precisely why he kept revisiting the theme of the Annunciation — easily the central subject underlying most of his creations. Countless pieces inspired by this theme are scattered among numerous museums and private collections, and for the time being it would be virtually impossible to estimate their total number. In-depth exploration and the desire to “interpret” this miracle led him beyond its mere façade (descriptive aspect), paving the way towards the pursuit of its abstract forms in his final years. 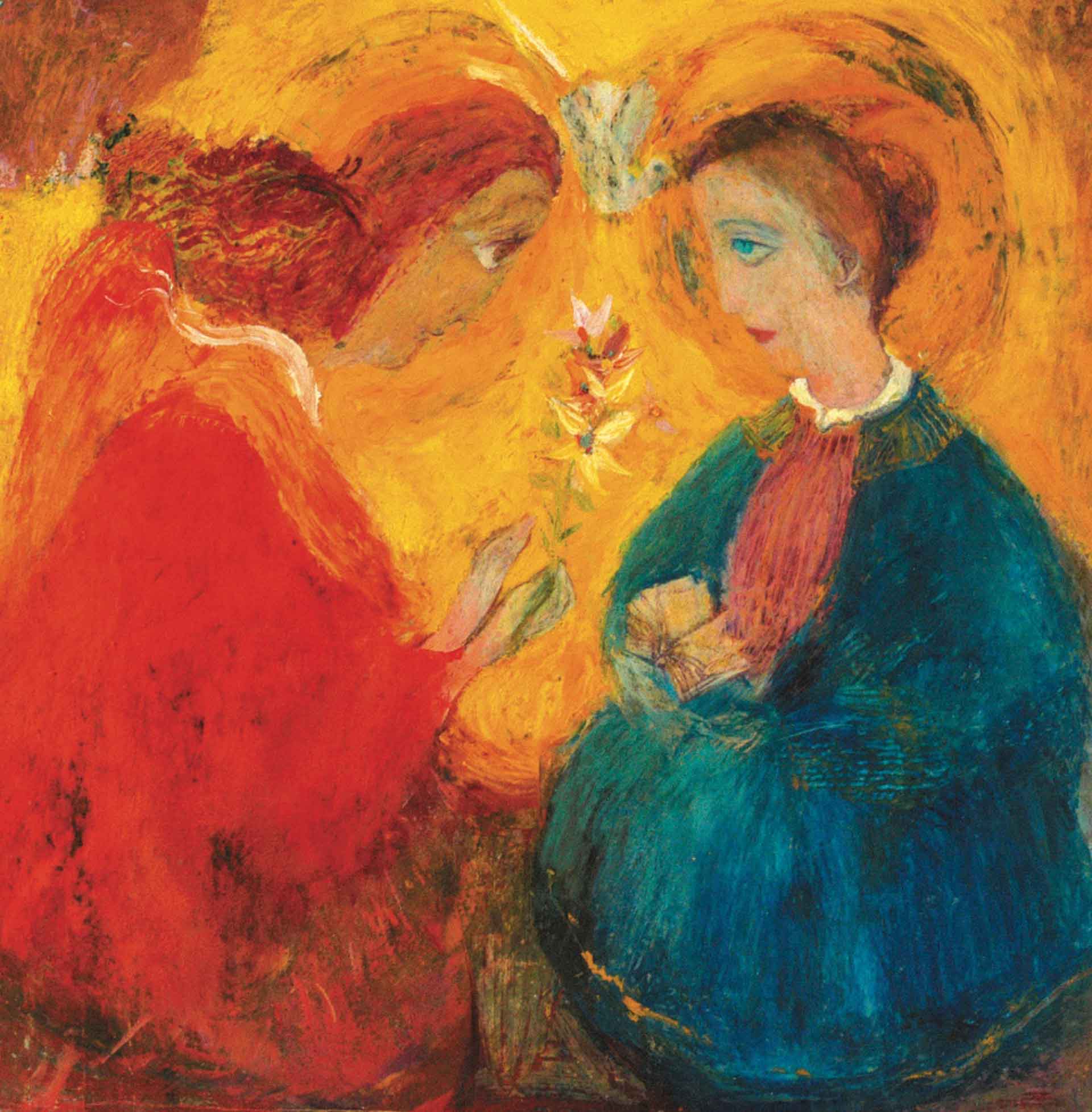 Irakli Parjiani’s creative work is intertwined with a peculiar stage in the history of Georgia, when the Declaration of Independence led to a significant spur of interest in re-examining previously restricted national cultural values, forbidden Western art practices, and silenced religious and philosophical exchanges. Parjiani ended up addressing the process with a truly unique creative language. 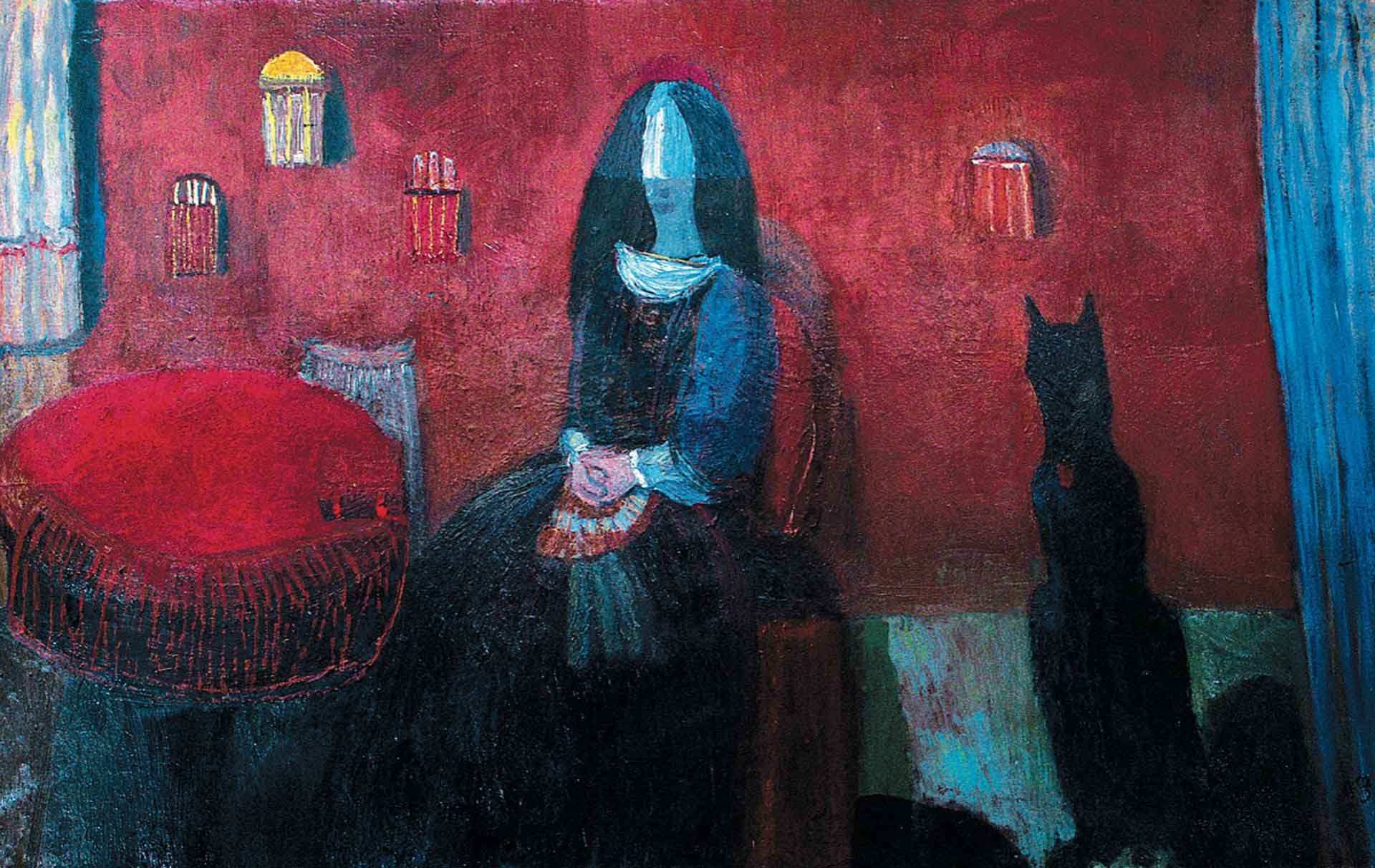 He was never really concerned with comparatively simple, “decoded” concepts. His very first monumental piece, The Room (also known as Lady with a Dog), displayed at the Blue Gallery in the late 1970s, was an attempt to portray the secret unveiled. His sole intent with his Lady at a Harpsichord (also known as Interior with a Lady) was to portray the sound of a harpsichord. This work instantly reminds one of Vermeer, which also explains the significance of the veil - a recurring motif in Parjiani's works. That is how Parjiani’s mystical images came to life, permeating our common reality. 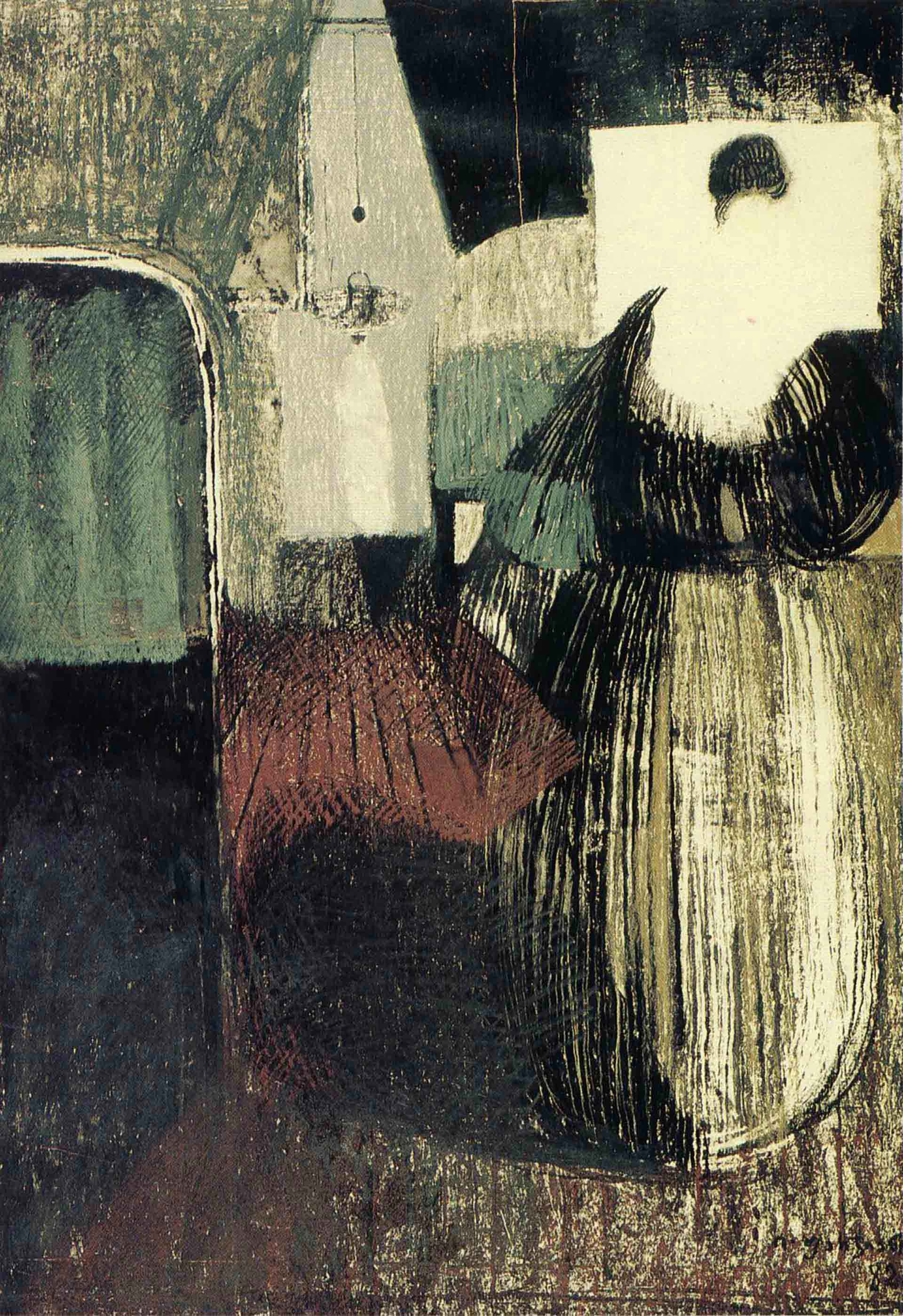 Parjiani sought to decode or explicate the inscrutable - whether through art, philosophy, religion or life in general. The miracle of the Annunciation is the act of God assuming a human nature with the sole purpose of bringing salvation to mankind, and the very moment when the New Eve in the form of Mary reverses Eve’s disobedience in the Garden. This angle is precisely the subject matter that Irakli Parjiani was preoccupied with. 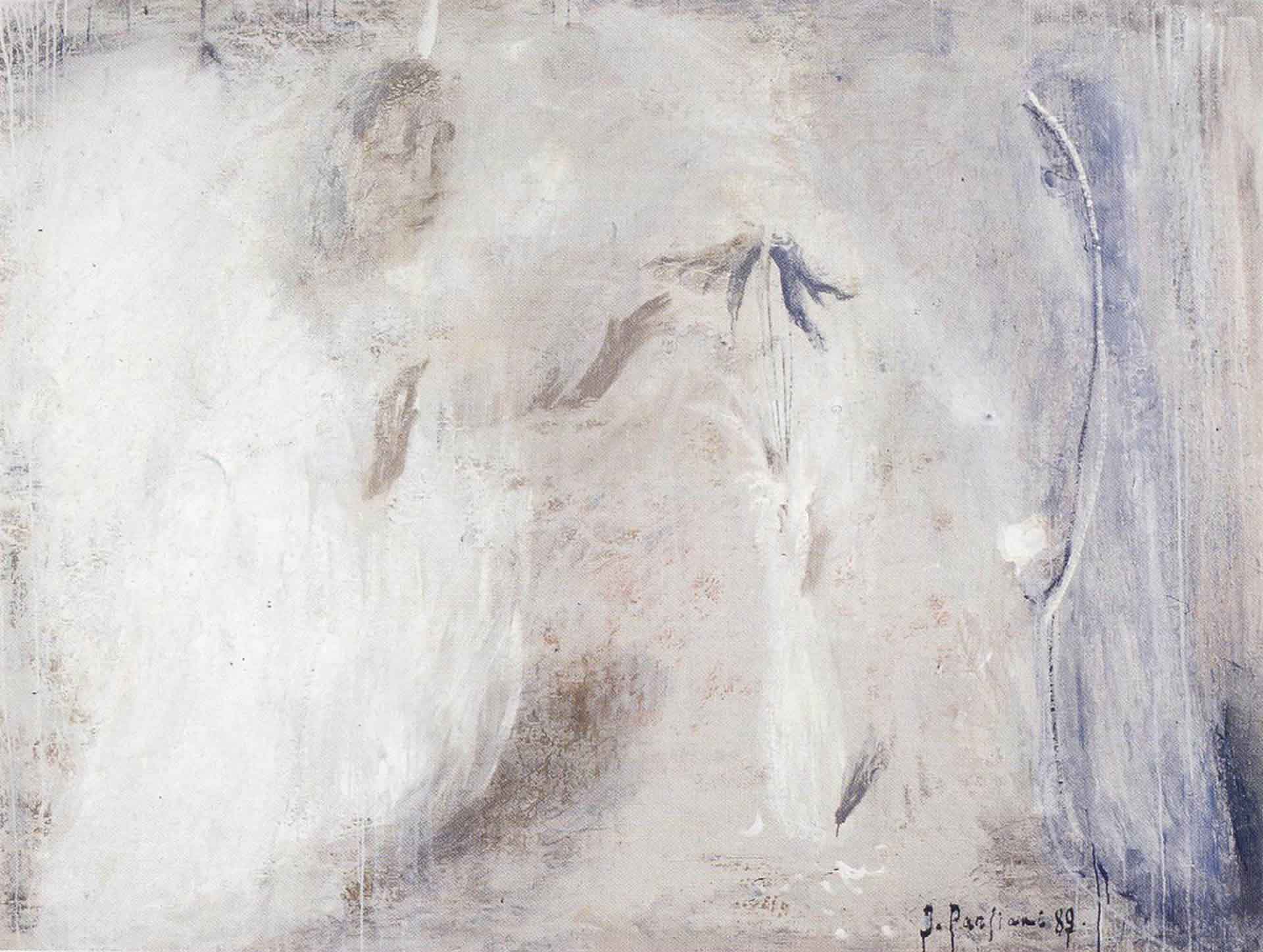 In one of his letters to a friend, sent from Abastumani where he would often stay for treatment, he writes: “This subject seems to have no end. I always claim to be done with it, promising myself that I will never go back to it, but somehow my hands keep returning. The process of exploring the concept has become meditative. Whether I like it or not, it takes concentration to a whole new level” (Literature and Art, no. 1, 2002). 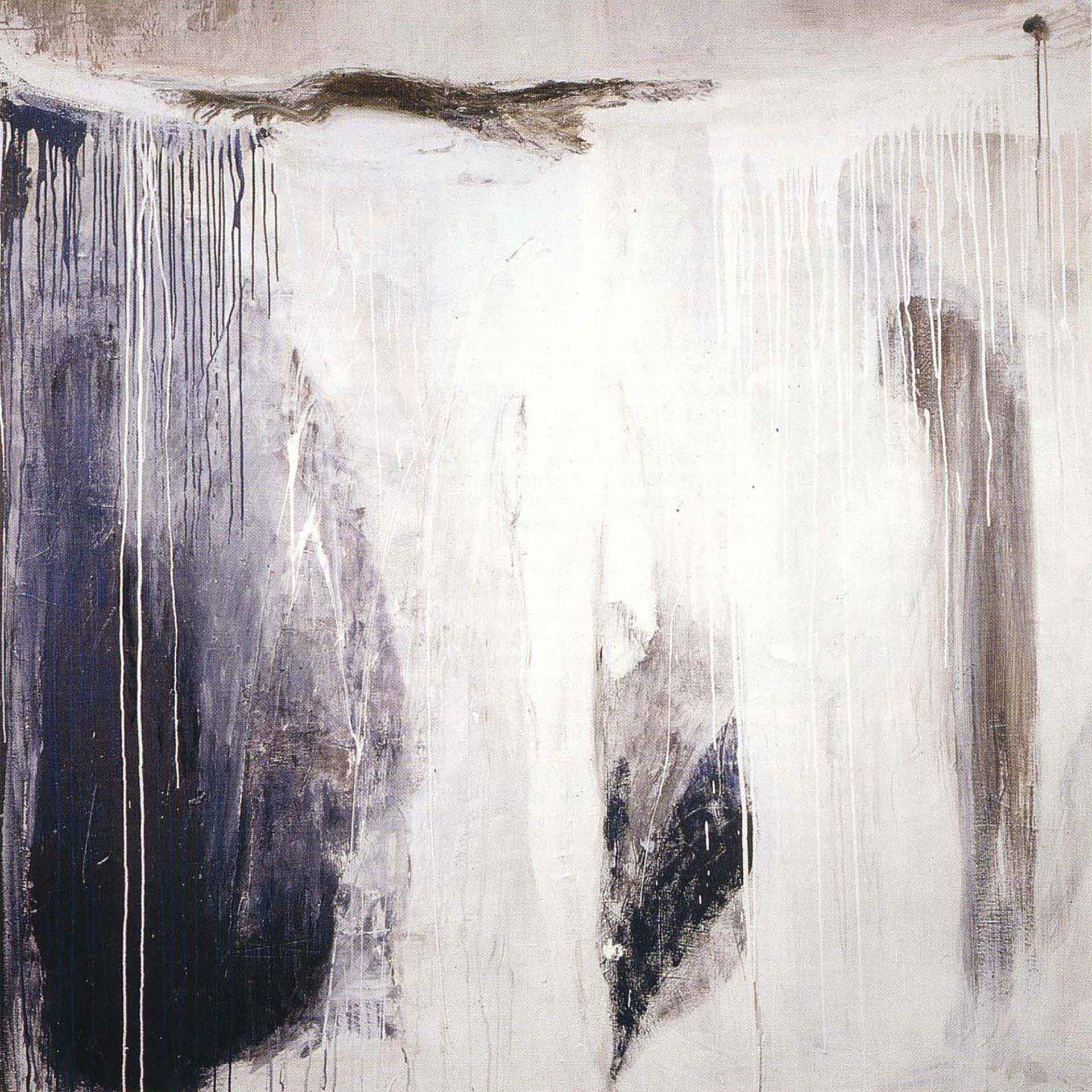 The number of forms that each subject ends up taking across Parjiani’s different works is virtually immeasurable. He delivers countless versions of the same exact scene: an angel flowing through, silent Mary gently wrapped in light with a prayer book in her hands, and a lily — a symbol of purity. Each composition differs in size, scale, color, the peculiarity of lines, the significance of light, and the dynamics of motion of each shape portrayed within. Parjiani came up with an original painting technique that is quite similar to encaustic painting: he would mix and boil pastel paints with wax to produce unique paints that possess exceptional depth and striking color. Despite such undeniable diversity, each piece retains the signature feel that is unique to Parjiani: the secret remains untold. 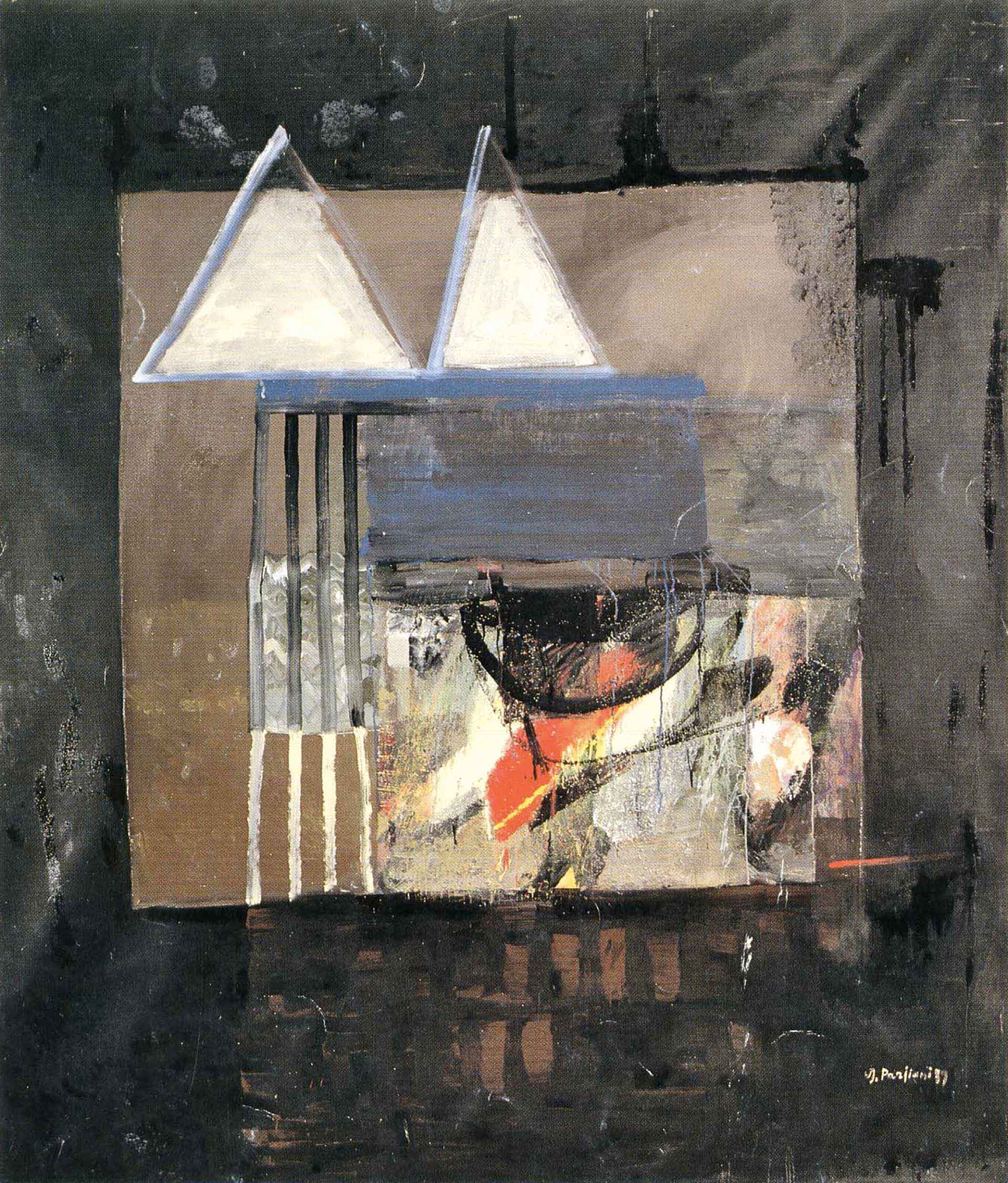 In 1985, while in Abastumani, Parjiani created a monochromic image of a water fairy. The mystical creature is portrayed in the foreground against a fictional landscape. But all of this is inconsequential, compared with what is happening at the very top of the picture: a white triangle emerging from within the depth of a nebulous cosmic space of sorts. In the late 1980s, during his time in Germany, Parjiani ended up creating metaphysical landscapes that resemble magnified versions of the upper part of the Water Fairy piece. It was precisely in Abastumani that he “caught a glimpse” of this landscape, and finally managed to enter this infinite space much later, while in Germany, shortly before passing. 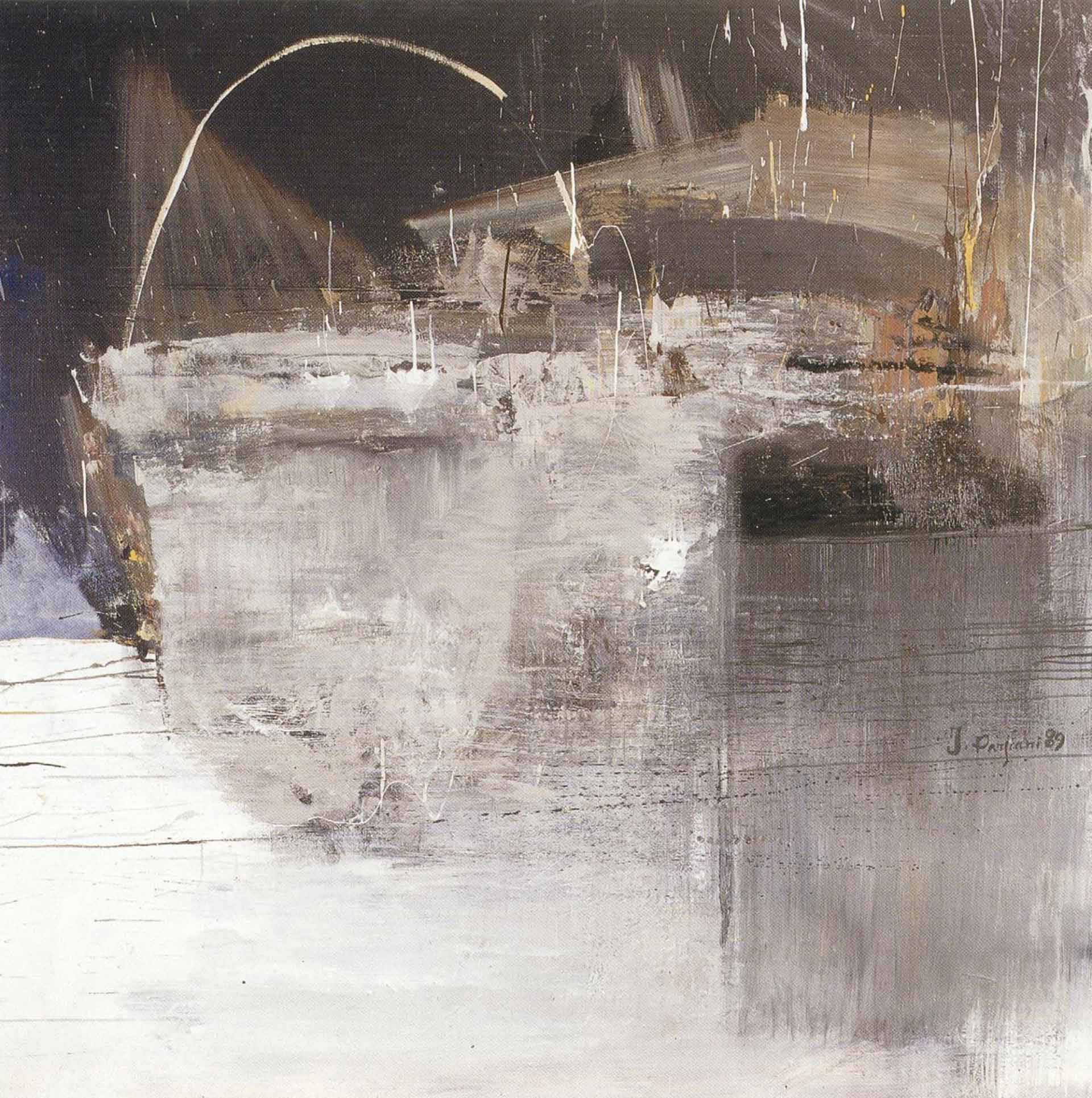 Parjiani’s early pieces are a fusion of still-life and landscape art. Perhaps the numerous still-lifes with flowers were essentially derived from his Annunciation-themed compositions that feature lilies as their inseparable element. Later on, his paintings portray vases with flowers and boats (the boat, a metaphor of survival, is yet another recurring element in the artist’s oeuvre). And a certain tiny figure of a lonesome man on an indistinct path — perhaps the artist himself — is constantly there, looking for answers to some of the most puzzling questions about life and death: Where does one end up on leaving the physical body? What is one’s mission on earth? What is eternity all about? These are the very issues that Parjiani attempted to explore through his works. 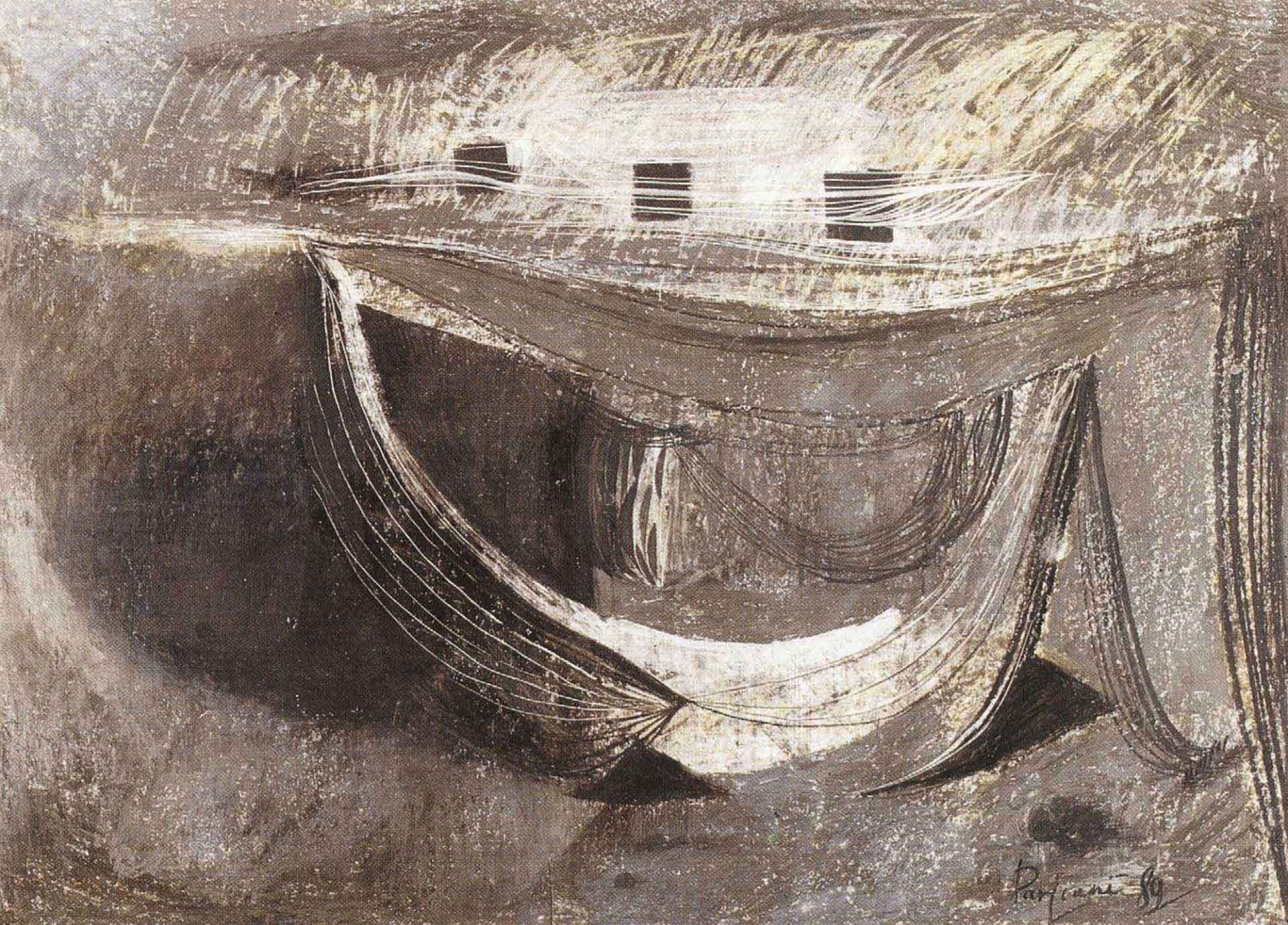 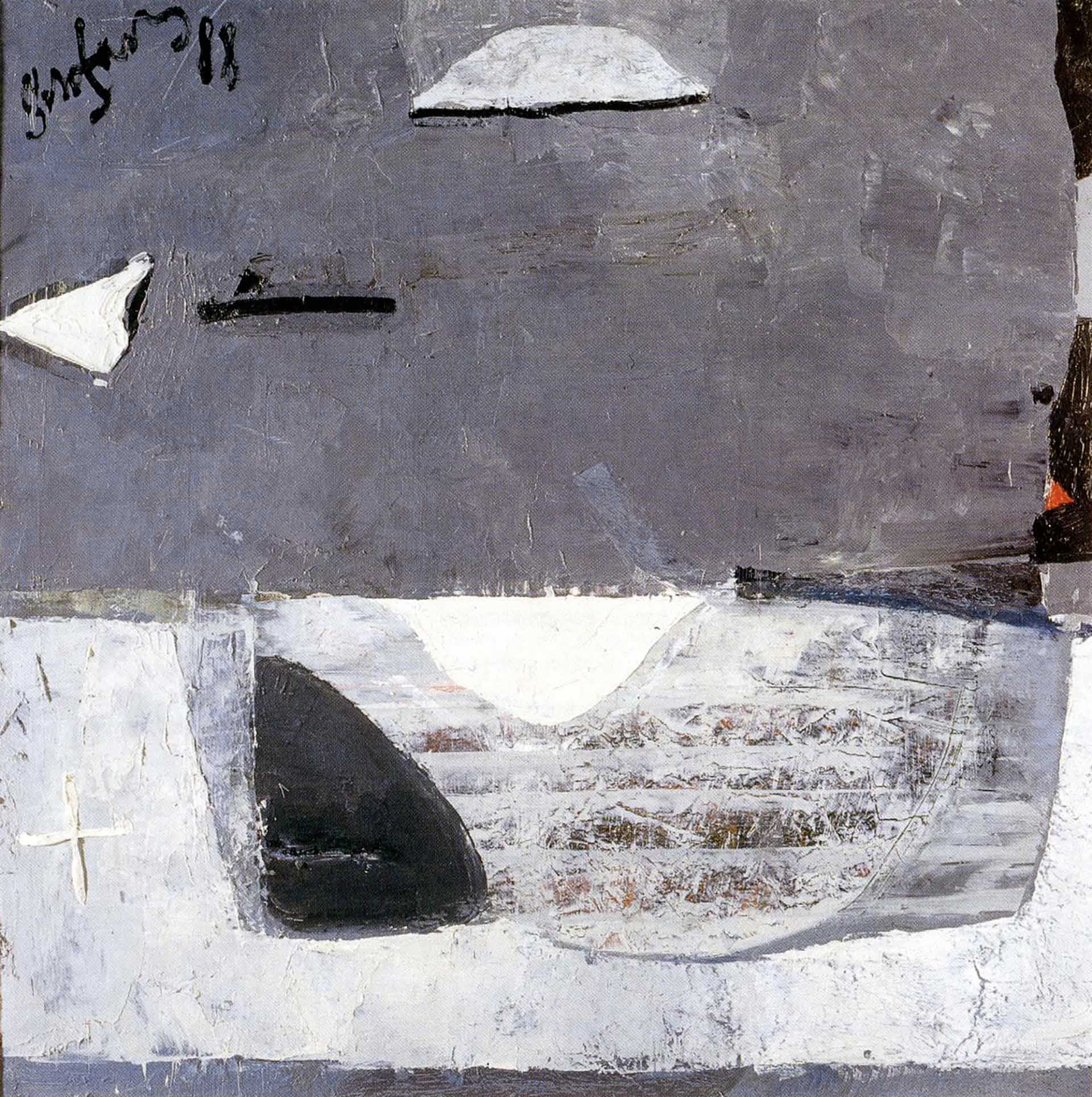 In his final years, the Annunciation as well as the Crucifixion scenes in Parjiani's creative work become more and more translucent, until eventually white takes over, and each figure featured in his compositions gradually becomes a mere suggestion that is entirely abstract. As a post-modernist painter, Parjiani strived to convey his thoughts through his art. For this precise reason, it comes as no surprise that to this very day one may locomote endlessly in pursuit of the keys to his metaphysical landscapes.